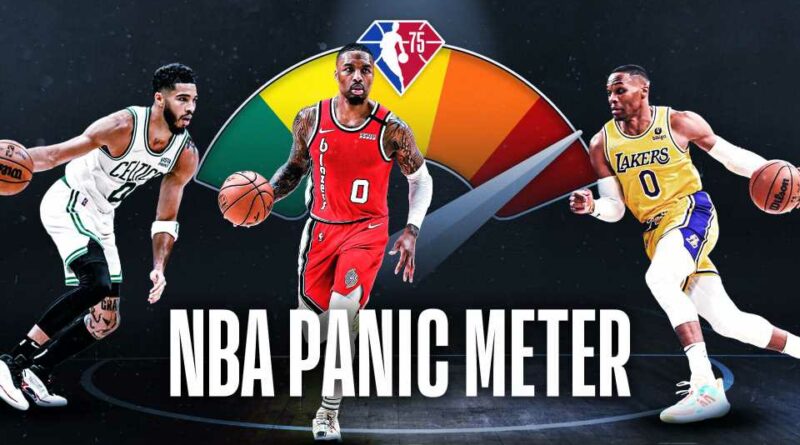 Some teams have gotten off to scorching starts this season. Other teams… not so much.

Whereas the Wizards and Bulls are at the top of the Eastern Conference standings, the Bucks are playing .500 basketball and find themselves in Play-In territory. The Warriors lead the way in the Western Conference with a 10-1 record while the Lakers (7-5) and Trail Blazers (5-7) continue to struggle with consistency.

The season is still incredibly young, but have we seen enough to be concerned with the start of the Bucks, Lakers and Trail Blazers? What about the Celtics, Hawks, Pacers and Pelicans, four more teams that haven’t lived up to expectations so far?

Three members of our Sporting New staff break out the panic meter to weigh in on each team’s shaky start.

I’m not panicking at all for one simple reason: Giannis Antetokounmpo, Jrue Holiday and Khris Middleton have played a total of  21 minutes together so far this season. There’s only so much we can learn about this team when their three-best players aren’t in the lineup together.

Put it this way: Antetokounmpo played a total of  311  minutes without Holiday and Middleton all of last season. This season, he’s already up to 164 minutes  without his co-stars.

To boot, Brook Lopez hasn’t played since Milwaukee’s opening night win over Brooklyn. He’s obviously not as big of a name as Antetokounmpo, Holiday and Middleton, but he’s a key piece of their defense and provides valuable spacing offensively. Without Lopez, Antetokounmpo has gone from playing 12 percent of his minutes at center to 69 percent to start this season, per Basketball Reference . That’s not necessarily a bad thing — Antetokounmpo at center is the ultimate cheat code for the Bucks — but Lopez’s presence allows them to be more selective with how much center Antetokounmpo plays.

The defending champs are going to be just fine, folks.

A five qualifies as mild panic, right? As much as I feel the need to overreact from what I’ve seen from Boston, there’s something telling me this team is going to find a way to figure things out.

It starts up top, as Ime Udoka is just weeks into his first season as an NBA coach and just as he’s still learning on the fly, his team is learning how to play in order to develop an identity. As Udoka is a promising young coach, that dynamic will only improve with time.

I can’t panic too much about a team with an All-Star duo, even if Jayson Tatum is shooting terribly to start the season. That, too, has to get better at some point. That he’s still averaging nearly 24 points a game while shooting under 40 percent from the field bodes well for when he does find his rhythm.

Boston’s far too talented to panic this early

Forget health. The Lakers aren’t healthy right now and there’s no guarantee they will be come playoff time. But let’s put that aside for a moment.

The Lakers still have a major Russell Westbrook problem as integrating the mercurial point guard has proven awkward at best and disastrous at worst. Watch the Lakers for even five minutes and you’ll notice a few startling signs.

On the surface, the Westbrook that showed up in Wednesday’s win over the Heat is the best-case scenario: a stat-stuffing producer capable of shouldering the load late. And yet even in that performance, he turned the ball over eight times and got to the line just twice. His turnover rate is the highest its ever been, his free throw rate is the worst its ever been, and relative to league average, his true shooting percentage is a career-worst.

If Westbrook doesn’t work, there is no backup plan. Not only does that $44 million price tag make any Westbrook deal untenable, the Lakers don’t have other assets to sweeten any deal should they even try to move off of him. As it stands, FiveThirtyEight gives the Lakers just a 43% chance of making the playoffs and forecasts a 39-43 record .

Should that play out, it would be the NBA’s ultimate Titanic hitting the iceberg moment.

If last season taught us anything, it’s that it’s best to be patient with the Hawks.

Don’t forget, this team was 16-20 heading into All-Star Weekend. The rest of the season, they went 25-11 . (Only the Suns and Nuggets posted better records post-All-Star). Trae Young saying the regular season is ” a lot more boring ” than the playoffs isn’t a great look and they don’t appear to be in sync right now, but there’s too much talent on this team for them to not figure it out… right?

Perhaps Clint Capela still working his way back from an Achilles injury has something to do with that — his numbers are down across the board to start the season — but the Hawks need to be better defensively to get back on track.

I’m not feeling great about the Trail Blazers, to be honest.

While they both came on the second night of a back-to-back, losses to the 76ers without Joel Embiid and the Suns at the hands of Frank Kaminsky weren’t exactly a great look for the Trail Blazers.

The Pacers entered the season with playoff aspirations as they figured to fall somewhere in that 6-9 range. Even if the Domantas Sabonis-Myles Turner fit still proves questionable, swapping in Rick Carlisle for Nate Bjorkgren figured to provide Indiana’s talented roster enough of a lift to hang in a relatively wide open Eastern Conference.

T.J. Warren is still recovering from a foot injury while both Malcolm Brogdon and Caris LeVert have missed time. And yet the Pacers routinely underwhelm, just as they did in Wednesday’s head-scratching loss to the Denver Nuggets who were playing without Nikola Jokic, Michael Porter Jr. and Jamal Murray. That’s just not a game any hopeful playoff team should lose, even without LeVert and Warren.

Carlisle’s teams are notoriously slow starters and four of their eight losses came by one possession including back-to-back one-point losses to open the season. Toss in the fact that Indiana has played the NBA’s third-hardest schedule thus far and there’s plenty of reason to think it will get things turned around.

It’s time to sound the alarms in New Orleans.

I admit that context matters and things would be much better if it were not for injuries to the Pelicans’ top two talents in Brandon Ingram and Zion Williamson. That said, in their absence, this team has already fallen in too deep of a hole to salvage the season, meaning the franchise will go another year without taking a tangible step towards becoming a playoff team.

I didn’t go with a 9 or 10 simply because I want to avoid conjecture of what the lack of success could mean for the temperament of Williamson or Ingram, but it’s hard not to draw parallels to other All-Star talents that left the city after the team fell short.