Daryl Morey and the Houston Rockets pushed the absolute limits of the NBA’s rules on trading draft picks to dump Chris Paul in Oklahoma City and bring in a slightly younger ball-dominant point guard—one who’s only two years removed from his last All-NBA first team appearance instead of five. To ditch Paul’s contract and trade for Russell Westbrook, the Rockets essentially gave up four years of control over their draft picks—2021, 2024, 2025, and 2026. The picks in 2021 and 2025 are both potential swaps with the Thunder, so the team didn’t run afoul of the Stepien Rule, and the pick in 2026 represents the furthest possible future pick the Rockets could have traded, as NBA rules don’t let teams deal picks more than seven years ahead of time.

There’s been some mourning, in the day after the trade, over the end of OKC’s unlikely run of limited success, and the loss of a small-market superstar that had played with his team for 11 seasons. For a lot of basketball fans, the inability of teams in less attractive, less competitive cities to hold onto their best players is one of the crucial problems facing the NBA today. I don’t necessarily believe that—the dominance of New York and L.A. over the Midwest has existed at least since Kareem Abdul-Jabbar forced his way out of Milwaukee—but everyone should be able to agree that it’s no fun to watch the Thunder get consigned to at least a half-decade of irrelevance because of the domino effect started by someone who played in Toronto last season. There’s an easy solution to help that problem: Don’t let teams trade draft picks more than three years in advance.

Seven years is an absurdly long time, especially in sports. But everyone involved in this trade, for as weird and scammy as it might feel on the surface, is acting according to their own rational self-interest. If Morey is still working for the Rockets in 2026, he’ll have been the team’s general manager for 19 years. The longest tenured current GM in the NBA, R.C. Buford, has been in that position with the Spurs for 17 years. Assets that are meaningless until the middle of next decade are essentially worthless to Morey. What benefits him most is winning now.

The Thunder, meanwhile, just lost their top scorer to Kawhi Leonard, so the obvious next step was to kick off what will be an epically boring, fan-alienating seven-year tank job, with the goal of a couple of these picks landing them a pair of superstars as effective as Paul George and Westbrook were. Those future Thunder saviors are probably around 13 years old right now.

To be clear, the Thunder don’t have any kind of plan here. Seven seasons ago, the Eastern Conference was dominated not only by LeBron’s Heat and Paul George and Roy Hibbert’s Indiana Pacers, but also Carmelo Anthony’s New York Knicks. Dwight Howard led the league in rebounding as a Los Angeles Laker. Rajon Rondo was leading the Celtics as the top assists man in the league. The Golden State Warriors dynasty was just starting to hatch. If Thunder GM Sam Presti—who likely won’t be with the team in 2026 either—thinks he knows what the NBA or his franchise will look like in seven years, he’s wrong. What he’s doing is spending real money, in the form of his actual players, for lottery tickets he probably won’t even be able to cash in himself. At best, he may just be selling the long-term hope of a return to the playoffs someday. Seven years stretches the basketball definition of “long-term” farther than should ever be allowed.

“But Lauren,” you might be thinking, “the Rockets’ picks for the next three years are probably going to be worthless. There’s no way the Thunder would have given up Westbrook for those.” Well good! Then they shouldn’t have! Maybe they should have sought out a trade that would give them actual, tangible talent in exchange for their centerpiece point guard. Or maybe they should have become buyers themselves, searching for a way to make Westbrook happy again after George’s departure. Nobody in Oklahoma City wins with this depleted roster they’re left with—not the team, not the fans—and seven years is way too long to wait for the fun to return.

Limiting the number of draft picks a team can receive in a trade not only disincentivizes franchises from quickly cutting bait with disgruntled players, it also forces them to try to get some actual good players in trades, instead of just future assets that’ll doom them to Tank City for the next several years. Most GMs, at the moment, are making the wisest decisions they can within the NBA’s rules. But if the “smart” result is one that still hurts fans, maybe it’s time to tweak those rules. 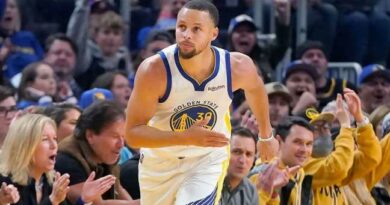