The Bucks have a really talented team. They are in second place in the Eastern Conference with an 8-2 record and have beaten some very good teams this year.

But the Trail Blazers are really good, as well, and they handed Milwaukee just its second loss of the season in a wire-to-wire 118-103 win at the Moda Center on Tuesday.

Portland is now 8-3 on the season and all alone in third place in the Western Conference.

The team’s win Tuesday had everything to do with CJ McCollum as the 27-year-old guard scored a season-high 40 points on 17-of-26 shooting. He also added six assists, five rebounds and four steals. He also put rookie guard Donte DiVincenzo on skates in the third quarter.

Giannis Antetokounmpo had a team-high 23 points with nine rebounds and six assists for the Bucks. Brook Lopez was hot from behind the arc as he scored 22 points on 8-of-14 shooting and 6-of-10 shooting from 3-point range.

Studs of the Night

Hornets guard Kemba Walker scored a game-high 29 points on 12-of-22 shooting with seven assists, three rebounds and three steals in Charlotte’s 113-102 win over the Hawks.

Mavericks rookie Luka Doncic continued his solid first season by putting in a team-high 23 points on 9-of-16 shooting to go with six rebounds and three assists in Dallas’ 119-100 win over the Wizards.

Nets guard Chris LeVert scored a game-high 26 with five rebounds in Brooklyn’s 104-82 win over the Suns.

Dud of the Night

Wizards forward Markieff Morris could not find the range Tuesday as he went 2 for 8 from the field and 0 for 4 from 3-point range while scoring four points. The Wizards were also minus-15 when he was on the floor.

Hornets rookie Miles Bridges made Hawks center Dewayne Dedmon pay for trying to get in his way in the paint.

76ers (6-5) at Pacers (7-4), 8 p.m. ET — Joel Embiid and Victor Oladipo are two players who are turning into must-watch television. Embiid has been dominant this season averaging 28.4 points, 12.6 rebounds and 3.5 assists while Oladipo hasn’t done much less as he’s putting up 23 points a night. He also hit the game-winning shot Sunday against the Celtics and just missed it Monday against the Rockets. Something exciting will happen in Indiana on Wednesday.

Life inside the bubble with NBA players: Golf, fishing and shotgunning beers 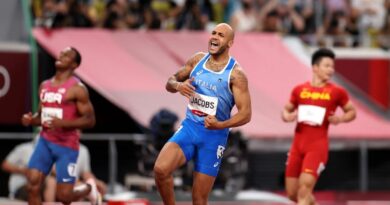