The mantle for the NBA’s best scorer is always up for debate, but Brooklyn Nets star Kevin Durant sent a timely reminder that he’s the elite bucket getter in the league, with a signature performance against the Detroit Pistons.

Playing without James Harden, Joe Harris, and Paul Millsap, the Nets came into Detroit shorthanded, but thanks to Durant’s explosive scoring, they walked away with a 116-104 win to move to 19-8 on the season.

Durant piled up a season-high 51 points, nine assists, seven rebounds, two blocks and a steal on an efficient 16-of-31 from the field, 5-of-10 from beyond the arc and 14-of-15 at the free throw line.

“We [were] missing James and we missing Paul Millsap, so I feel like I had to pick up the scoring a little bit more, Durant said postgame.

Let’s dive into some of the numbers behind Durant’s scorching night in Detroit.

1: Highest score of the season

Durant’s 51 fell just short of his career-high 54 points which he set against the Golden State Warriors in 2014  while playing for the Oklahoma City Thunder.

His 51 tonight, however, set the benchmark for the 2021-22 season, eclipsing the previous highest score of the season, set by Stephen Curry in November.

Deron Williams still holds the record for the most points scored in a Nets uniform with 57 points in 2012.

The four-time scoring champion now has seven 50-point games in his career, with tonight’s his first 50-ball in a Nets uniform and his first since 2018.

Kyrie Irving sits tied for eighth all-time, making it three payers from the Nets currently sitting in the top 10 among active players. 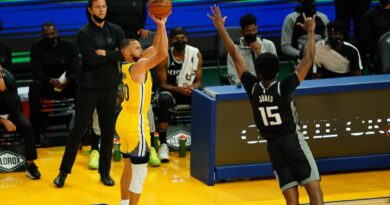 Curry sets NBA record for 3s in a month with 85