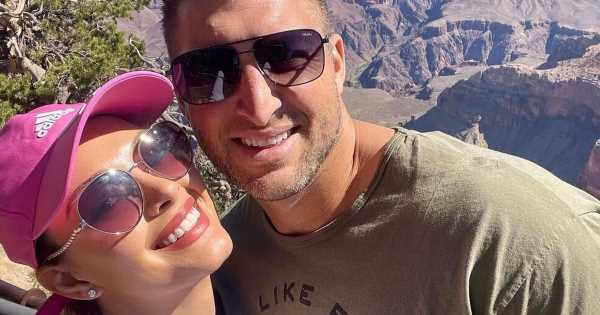 Demi-Leigh Nel-Peters is a former Miss Universe who remarkably fought off armed attackers during a possible abduction attempt.

Nel-Peters is married to former NFL quarterback-turned-tight end Tim Tebow, and she recently shared her story to try and raise awareness of human trafficking.

The model uploaded an Instagram video to the Tim Tebow Foundation, which was founded ‘to bring faith, hope and love to those needing a brighter day in their darkest hour of need’.

Nel-Peters, who hails from South Africa, explained that one of the reasons she is passionate ‘about giving women all over the world a voice and an opportunity to reach out for help’ is because she lived in fear.

The beauty queen then spoke of a moment she experienced said fear, when she was on her way to an event in her sponsored car after being crowned Miss South Africa.

Her car was quickly surrounded by five armed men at a red light.

“The day I sat at a red traffic light, all dressed up, on my way to an event, on top of the world, I was just crowned Miss South Africa a couple months ago. In my brand new car that was sponsored, it was one of my winning prizes, on my way to some fancy event,” Nel-Peters recalled.

Nel-Peters did not know how the situation would unravel but she knew she had to escape with her life – she put her hands up and ‘surrendered’ her material possessions in an attempt to give the attackers what they wanted.

As she tried to run away, one of the men snatched her arm and pulled her back into the car and told her she was coming with them.

The 26-year-old then explained how she earned a brief escape by punching the man as hard as she could in the throat – but the nightmare wasn’t over.

She ran onto a busy avenue but was shocked to learn that people refused to stop their cars to help her, despite it only being 5pm.

“As I ran up that avenue, I knocked on about 30, 40 car windows,” New-Peters continued. “And do you know how many cars stopped for me? Not one. Not one person stopped to help.

“I don’t know what was more terrifying, being attacked by these five armed men, or not getting any help.”

Nel-Peters, who married Tebow in January 2020, ran and knocked on car windows until a 19-year-old pulled over and let her in.

The teenager asked the model if she had a gun, and the model replied by saying that she herself had just been hijacked.

“She let me into her car. And she took me to safety,” Nel-Peters said.

“I don’t know if those men would have followed me, grabbed me, who knows. But I try not to think about that.”

Nel-Peters expressed her gratitude for the woman who helped her, and encouraged others to be like her saviour.

“Be that person that leans over, and opens up your car door, and lets that person in and leads them to safety,” she added.

Nel-Peters and her husband work together to end human trafficking through the player’s foundation, with Tebow calling the crime “one of the greatest evils that exists in the world today”.

Tebow was released by the Jacksonville Jaguars on Tuesday, ending his brief return to the gridiron scene after eight years out of the NFL.

NFL teams are required to cut their rosters to 85 by 4pm Eastern time on Tuesday, and Tebow was unlikely to make the team.

Green: Suspension over KD tiff was hard for me

Lakers’ defense as powerful as a superstar, in Frank Vogel’s mind