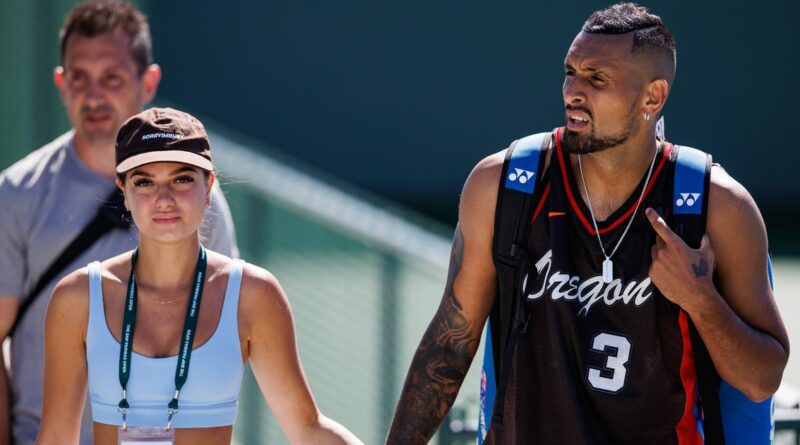 Tennis star Nick Kyrgios has recently been dominating the headlines for his behaviour at Wimbledon.

The Australian national was fined earlier in the tournament for spitting in the direction of a spectator, and could also be penalised for violating the Wimbledon dress code.

In a controversial week for the Wimbledon player, he’s now been accused of assaulting his ex-girlfriend and will appear in an Australian court next month.

The 27-year-old tennis player is facing one charge of common assault after an alleged domestic incident involving his ex-girlfriend Chiara Passari in 2021.

However, the Tennis star’s legal team have said that he isn’t officially charged until his appearance in court.

Kyrgios dated Passari during an on-and-off relationship from 2020 until late 2021. But now the sports star has a new girlfriend – Costeen Hatzi.

As they’ve been spotted together during the Wimbledon tournament, here’s everything we know about Kyrgios’ current girlfriend.

Costeen Hatzi is a blogger and influencer who’s based in Sydney, Australia.

Hatzi currently has over 88,000 followers on Instagram and regularly posts pictures of her travels, outfits and beauty products.

As well as her decent Instagram following, Costeen also has 27,000 followers on TikTok.

The pair both confirmed their relationship publicly as they posted to Instagram for the 2022 new year.

Kyrgios posted a picture with his arm around Costeen and captioned the photo: “I’m blessed. This is to the New year & a chance for all of us to get it right”.

Meanwhile, Hatzi posted a similar photo as she wrote: “Not a bad way to start 2022”.

Since going Instagram official, the pair have posted regular updates on their relationship as they often share loved-up pictures together.

Hatzi regularly travels with Kyrgios as he competes around the world.

She supported him during this year’s Australian Open and has been sitting courtside at Wimbledon as she watches him play in this year’s tournament.

The couple have also taken trips to LA, Palm Springs, Miami and Mallorca together.

Just months into their relationship, Kyrgios sparked engagement rumours after he posted a picture of the pair hugging alongside a diamond ring emoji.

And five months into their relationship Kyrgios hinted that they would be getting married “very soon”.

While doing a question and answer session with fans on Instagram the tennis star was asked when he and Hatzi would tie the knot. He responded “very soon” alongside a heart and ring emoji.

But while he’s heavily hinted at their engagement, Kyrgios still refuses to officially confirm it.

During an interview on the Today Show in May, host Allison Langdon asked him: “I know you've been saying girlfriend Costeen is "the one", and I've noticed you've been using a lot of ring emojis [on Instagram] lately…

“is there anything you want to share with us, Nick?”

But he dodged the question, responding: “I like to keep that quite private to be honest,

“Just working on my car park spots at the moment!”

LeBron on Lakers clinching: What I came here for