The fallout from Monday night’s fracas between Denver’s Nikola Jokic and Miami’s Markieff Morris spilled into Tuesday morning as both sets of brothers of the players involved levied social media threats at the other.

Marcus Morris, a forward for the Los Angeles Clippers, tweeted “Waited till bro turned his back smh. NOTED.”

The insinuation was that when Jokic retaliated last night late in the fourth quarter at Ball Arena, leveling Markieff, he waited until he wasn’t looking.

“It’s just absolutely uncalled for, and it would have looked a lot different, this whole thing could have been a lot uglier if Markieff was actually facing Jokic,” Spoelstra said. “The fact that he had his back turned, and he made a play like that, blindsiding, it was just a very dangerous play.”

“You should leave this the way it is instead of publicly threatening our brother! Your brother made a dirty play first. If you want to make a step further be sure we will be waiting for you !! Jokic Brothers.”

Following a lengthy review, Jokic was ejected and Morris was assessed a flagrant 2. An NBA pool report said that Morris’ ejection was, in part, because his action provoked a further altercation.

Jokic was remorseful when he met with the media last night.

After the game ended, Heat players waited in the hallway outside their locker room, not far from the Nuggets’ locker room. Miami forward Jimmy Butler yelled down the hallway, telling Nuggets players they know where Miami’s bus was parked.

James Harden trade rumors: 76ers interested in Rockets star because of course they are 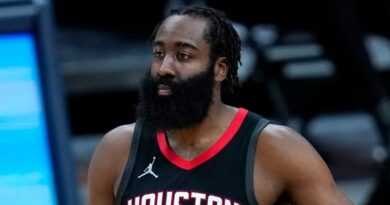