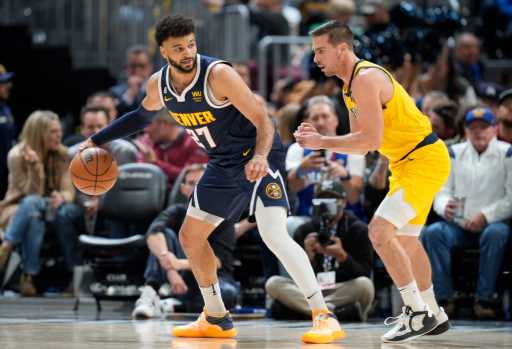 Nuggets center Nikola Jokic sat on the sidelines, dressed in a peach-colored suit with a flamboyant dress shirt. He made for quite a colorful bench ornament.

And the NBA’s reigning, two-time MVP, out with an injured left hamstring, was able to relax and enjoy his Friday night off as his teammates dunked Indiana, 134-111, at Ball Arena.

And Jokic, the league’s master at triple-doubles, got to observe his buddy, Jamal Murray, notch the first triple-double of his career. The guard finished with 17 points, 14 assists and 10 rebounds.

Murray brought the crowd to its feet late in the third quarter with two spectacular assists in succession, first feeding Christian Braun for an alley-oop dunk, and then doing the same for Kentavious Caldwell-Pope. Then Bruce Brown turned his own steal into Denver’s third breakaway dunk in a row as its lead blew up to 92-76.

The running, gunning Nuggets turned the game into a monster jam rally and ended up shooting a sizzling 61.4% (51 of 83). They shot 50% (14 of 28) from 3-point land. Even without Jokic in the lineup, the Nuggets dished out a season-high 38 assists.

Denver won its ninth consecutive game and has won 12 of its last 13. The Nuggets improved to 22-3 at home, where they have won 16 in a row.

Big picture: the leaders of the Western Conference are 33-13, the best record in franchise history through 46 games.

With Jokic out, Denver got balanced scoring with Aaron Gordon muscling his way to 28 points, followed by Caldwell-Pope with 20 and Michael Porter Jr. with 19.

For much of the first half, the running Nuggets, who had nine steals, held a monster jam rally. Bruce Brown’s tomahawk-slam off a nice assist from Bones Hyland, was the best dunk of all, putting Denver ahead 50-36 with 7:56 left in the second quarter.

At that point, the game had the makings of a blowout, but the Nuggets got sloppy before halftime and the Pacers started turning Nuggets turnovers into points. Denver led just 61-53 at intermission.

But they turned it on in the second half and won in convincing fashion.

The Nuggets will attempt to keep their hot streak going when they host Oklahoma City on Sunday night. 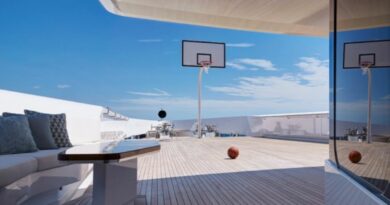