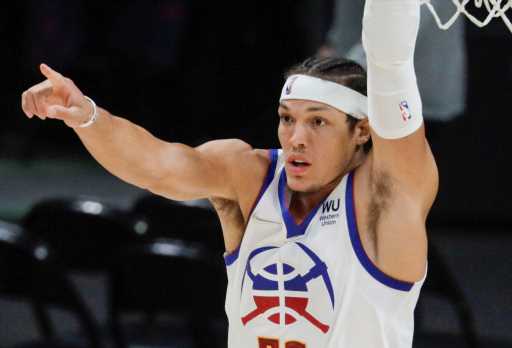 Only two minutes had gone by in the third quarter when Aaron Gordon’s new reality dawned on him.

The Nuggets had flipped the court on a Hawks miss, and Jamal Murray took off for an easy layup.

As Denver’s lead ballooned, the Hawks called a timeout to stem the momentum. Gordon walked off the court pumping his fist while settling, seamlessly, into his new home.

The Nuggets cruised Sunday night, crushing Atlanta, 126-102, in Gordon’s debut. In 20 minutes, Gordon finished with 13 points on 6-of-9 shooting, including two dunks off feeds from Nikola Jokic.

“I thought for the first game, with a new team, going through a couple of walk-through sessions, I thought he was terrific,” Nuggets coach Michael Malone said. “… Watching him tonight, his IQ, his ability to play without the ball, his movement, his cutting, his athleticism … He’s just such a versatile weapon.”

Now 28-18 on the season, the seeds for a dangerous postseason contender were planted Sunday night.  Denver takes on Philadelphia on Tuesday.

Jokic flirted with another triple-double, ultimately finishing with 16 points, 10 rebounds and eight assists. He was one of six Nuggets to finish in double figures – Murray (17), Michael Porter Jr. (15), Will Barton (12), JaMychal Green (20) and Gordon being the others.

With 32 assists, the Nuggets played a beautiful brand of unselfish basketball that embodied what Denver’s front office envisioned when trading for Gordon.

That his debut came against the Hawks, a traditionally bouncy team with big men like John Collins and Clint Capela, was only fitting. At times, Gordon held his own defensively against Collins, Trae Young and 3-point marksman Kevin Huerter.

Denver’s offense continued to sizzle in the third quarter. Jokic found Gordon for an easy dunk to start, and the floodgates were opened. Murray got hot from the mid-range, then Jokic stretched Atlanta’s defense with a 3-pointer. Porter sprinkled in two makes to join the party as well. Denver’s 32-point third quarter hinted at their offensive potential even though the Nuggets shot under 50 percent in the period.

Heading into the fourth, the Nuggets had a comfortable 97-79 lead.

At least Sunday, the Nuggets’ two incoming big men left JaVale McGee out of the regular rotation, which left Paul Millsap and JaMychal Green as the reserve frontcourt. It worked, as the Nuggets pounded the Hawks on the glass (49-31) and dominated the paint points (50-30).

Malone said the team used the last two days to acclimate newcomers Gordon and McGee, but acknowledged most of the chemistry would have to be built during games.

“Just going through introducing them to terminology, philosophy of our offense, our defense,” Malone said. “Yesterday walking them through some of the plays, defensive coverages, and then this morning, a little bit more of the same but a little bit more pace. It’s not going to happen overnight.

“We have 27 games to go,” he said. “When you make a trade like this, you want the chemistry to be there right away, but often times it’s not. The only way you get that really is going to be on the court with guys playing and going through those growing pains.”

Malone suggested he hadn’t thought much about optimal lineups or pairings, but based off his early minutes, developing the chemistry with Jokic seemed like a priority.

“Aaron Gordon’s going to be on the floor, and we’ll figure it out from there,” Malone said.

The Nuggets’ offense hummed in the first half as if they’d played together since middle school. Barton had a team-high 12 points, following closely by Gordon’s 11. Porter and Jokic had nine points each, while Murray (6) and Green (10, off the bench) found easy buckets as well.

After holding the Hawks to just 20 points in the second quarter, the Nuggets carried a 65-55 lead into the break.

But the story was Gordon. His adjustment to the Nuggets’ offense looked seamless. When he and Jokic connected on an uncontested dunk less than four minutes into his debut, the possibilities for the pairing seemed endless.