1. Yeah Mike. Michael Porter Jr. all but guaranteed his lagging play would improve in Game 5 against the Blazers. He delivered on Tuesday night at Ball Arena. Porter dropped 14 points by halftime on 6-of-8 shooting (2-of-3 from deep). His first bucket, a second-chance layup resulting from pure hustle, set the tone. Porter got in early foul trouble that limited his third-quarter production. But he finished strong with 26 points, 12 rebounds, 3 assists — including the game-clinching triple in double-overtime. Porter must be at the top of his game moving forward if the Nuggets expect to win this series.

2. Foul fest. The officiating was active in the third quarter with the Nuggets accounting for nine fouls as Portland took its first lead of the game. MPJ got sent to the bench after his fourth whistle. Nikola Jokic earned a technical for arguing a no-call in the post. And 10,500 in attendance chanted — “REF YOU (STINK)!” — in unison at Ball Arena. Portland had its own issues with the officiating, though, with starters Jusuf Nurkic and Robert Covington getting in early foul trouble. The Blazers were also called for nine fouls in the third quarter alone.

3. Clamps. The Nuggets held the Blazers without a field goal for the opening four minutes of the first quarter — holding Portland to 0-8 shooting — to jump start Denver’s early lead. The Blazers did not score until the 7:53 mark when Damian Lillard made a technical free throw (via Austin Rivers’ three-second violation). The Nuggets’ increased effort was apparent with Aaron Gordon successfully wrestling away a loose ball that led to points. Denver led 38-25 on Tuesday night after the first. 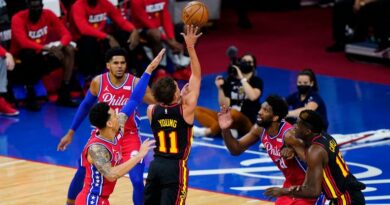