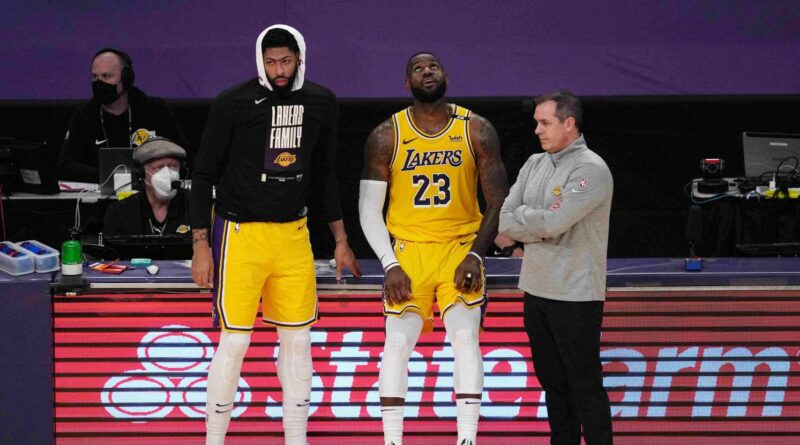 By the time the final buzzer sounded, the Los Angeles Lakers showed the toll they had felt all season.

Surely, the Lakers expressed disappointment their season ended with a 113-100 loss to the Phoenix Suns in Game 6 that cemented a first-round playoff exit less than a year after winning the 2020 NBA championship. But the Lakers pointed more toward the external circumstances than any self-inflicted wounds.

That started with the Lakers missing a combined 163 games due to various ailments and fielding 25 different starting lineups. Most of that had to do with Lakers’ stars Lebron James and Anthony Davis spending time in the trainer’s room instead of on the court. While Davis missed a combined 36 games most notably for his strained right calf, James sat for a combined 26 games because of his high right ankle sprain.

“The No. 1 thing for us is getting AD healthy, but it doesn’t matter what changes we make,” James said. “We get big fella healthy and get back to where he was before the injury. I get my ankle back right, which I already know I'll be 100% percent before the season starts in October. That’ll put us in the best possible chance to be successful next year.”

Anthony Davis suffered a strained left groin in Game 4, and the Lakers were never able to recover from his loss. (Photo: Sean M. Haffey, Getty Images)

After all, the Lakers won the 2020 NBA title primarily because James and Davis stayed healthy. And when healthy, they became the NBA’s top duo.

Hence, the Lakers ranked second in the Western Conference and had a 21-6 record this season before Davis’ injury. The Lakers dropped to third place with a 28-14 record by the time James suffered his injury. With those absences overlapping, the Lakers then plummeted to a No. 7 seed and faced the second-seeded Phoenix Suns only after beating the Golden State Warriors in the NBA’s play-in tournament.

After that, James admittedly did not feel fully healed with his right ankle. Davis then experienced more injuries in Game 3 (hyperextended right knee) and Game 4 (left groin), which sidelined him in Game 5 and limited him severely for less than six minutes in Game 6.

“We were rolling, and we had the pieces. We just couldn’t stay healthy,” Davis said. “A lot of that was me. When you don’t have a main guy that is on the floor? Then you have another guy and two main guys unable to participate? It's tough for an extensive amount of time.”

Still, there was more to the Lakers’ failed quest to win an NBA record 18 NBA championship than just key injuries to their two star players. Some of it involved external circumstances that no NBA team ever experienced. Some of it involved internal decision making that leaves mixed feelings on whether they upgraded their roster or compromised their championship aspirations.

The Lakers began the 2020-21 NBA season only 71 days after winning the NBA championship in the league’s campus bubble. According to the Elias Sports Bureau, that marked the shortest offseason in history among the U.S’ four major professional sports leagues in the NBA, NFL, MLB and NHL. Just like all the other 29 NBA teams, the Lakers were subject to daily COVID-19 testing, strict protocols and playing games without fans. But because of the season’s short turnaround, James described this season as “mentally, physically, spiritually and emotionally draining.”

“We knew it was going to be an uphill battle,” Lakers coach Frank Vogel said. “None of our guys were prepared for training camp. We tried to grind through it, get our legs under us and get them conditioned the right way.”

“I’m excited for the break. But I'm also excited to get ready for next season and show people we are who we are. Last year wasn’t a fluke, and we will be back.”

Then, the Lakers sought upgrades externally. They acquired last year’s NBA’s Sixth Man of the Year (Montrezl Harrell). They dealt Green and their No. 28 pick to Oklahoma City for another Sixth Man of the Year candidate (Dennis Schroder). They sought to offset Green’s absence by signing Wesley Matthews. They landed a former Defensive Player of the Year (Marc Gasol). They rewarded a dependable role player (Kentavious Caldwell-Pope).

“I thought the team we built this summer was the right pieces to do so,” Davis said. “Health just played a big factor.”

Changing up their roster

The Lakers hoped Schroder and Harrell could add offensive depth. But while Schroder became feast or famine, Harrell remained limited defensively. The Lakers envisioned Gasol filling in those defensive needs, but he struggled with his fit before facing limitations after contracting the COVID-19 virus. Caldwell-Pope and Matthews offered streaky shooting. The Lakers then acquired Andre Drummond on the buyout market in hopes to bolster the center rotation. Gasol then played better in part because of his improved health and in part because of hoping to stay in the center rotation. Yet, Drummond faced a learning curve partly because of the overlapping absences to James and Davis.

“You got to go through the [BS] to get to the good [stuff]. We went through a lot of stuff this year,” Schroder said. “I’m going to work my ass off to come back here and give everything the fans want. I want to win a championship and I’ll work my ass off this summer to come back and be me.”

BIGGEST 3: James Harden is the Brooklyn Nets' Most Important Player in series vs. Milwaukee Bucks

INJURY WOES: Lakers' Anthony Davis on injury tag: 'I don't have to prove nothing to anyone'

That might not happen. Schroder declined the Lakers’ efforts this year to negotiate an extension. Shortly after the Lakers’ loss, Schroder removed any references to the Lakers in his Instagram profile. But minutes later, Schroder offered mixed messages about his affection for the purple and gold and his hope to see how the market values him.

“I want to make my own decision. One time. I can decide where I want to go,” Schroder said. “I want to re-sign with the Lakers or I want to go somewhere else. That’s the only thing. The Lakers, they didn’t do nothing. They’re great. They have the top two players in the league. Everybody in the locker room is great. But at the end of the day, I want to be here and win a championship. It’s not even a question. It’s not about money. Everyone that knows me knows it’s not about money. Of course you want to be fair. But at the end of the day, if everything is good, you’re going to come back and win a championship next year.”

Do the Lakers think they can win an NBA title simply by keeping everyone? James, Davis and Kyle Kuzma are on long-term contracts. But Schroder, Drummond, Alex Caruso, Talen Horton-Tucker, Jared Dudley and Ben McLemore will be free agents while Harrell has a player option.

“What happens next and what I think needs to happen next, we'll discuss over the upcoming weeks,” Vogel said. “But I do think we have a group that could repeat had it not been for the injuries.”

Besides, the Lakers broke up part of their championship roster partly out of concerns on how they would handle a compressed season.

Rajon Rondo (9) was a key piece on the Lakers' roster last season that won a title. But the team did not retain him. (Photo: Robert Hanashiro, USA TODAY Sport)

Rondo has struggled in recent years with staying healthy. Howard and McGee had opined for a bigger role after only being used for matchup purposes. Bradley’s value diminished once the Lakers won the NBA title without his participation in the bubble out of family concerns. The Lakers hoped acquiring younger players would maximize their chances with staying healthy and injecting energy to a team that could deal with burnout during the season’s quick turnaround.

Even with the mixed offensive chemistry, the Lakers finished the regular season with the league’s best defensive rating by allowing 107.1 points per 100 possessions. The Lakers also ranked second in the league in points allowed (106.8).

“Rob has done such a great job with constructing this team over the last few years. He will continue to do that,” James said. “I will have some input. He always asks for my input. He has AD's input. But at the end of the day, we want to get better. I trust Rob and trust Kurt and trust everyone upstairs and our coaching staff. Rob is going to do the due diligence to construct this team to be where it needs to be to win a championship.”

First things first. James and Davis pledged to heal their respective injuries this offseason both to fuel better performances and expedite on-court chemistry with their supporting cast.

“I’m excited for the break. But I'm also excited to get ready for next season and show people we are who we are,” Davis said.  “Last year wasn’t a fluke, and we will be back.” 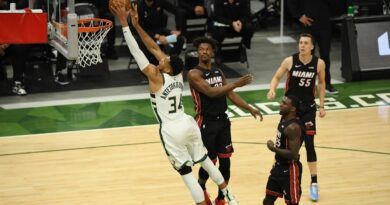 How Giannis and the Milwaukee Bucks are feasting on the Heat

This is Jayson Tatum’s chance to cement his superstar transformation

Michael Jordan or LeBron James? NBA fans have spoken, and the answer is not close