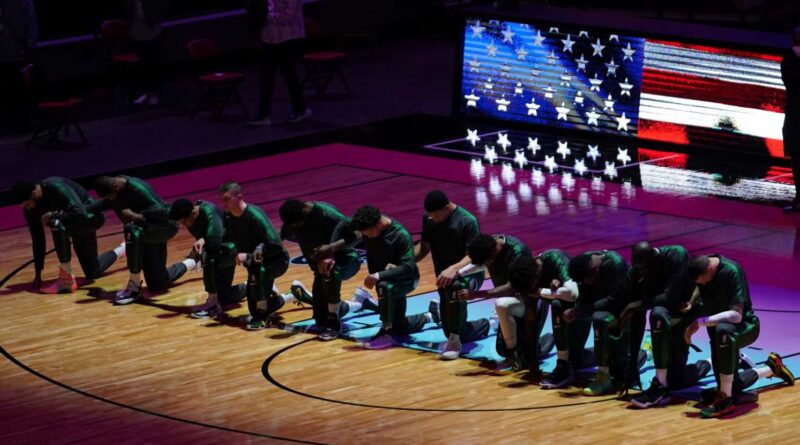 If your eyes – and heart and mind – are open, you saw the difference. NBA players did.

A riotous mob stormed the U.S. Capitol, and those who wanted to thwart democracy and disregard the Constitution – an attack on the peaceful transfer of power – did so openly, without masks, seemingly free of worry. Storming in the Capitol chamber. Sitting in Nancy Pelosi’s office. Walking in the halls of the Capitol with a confederate flag. Constructing a noose hanging from a gallows, steps from the Capitol.

Someone scrawled "Murder the Media” on a door. A man wore a "Camp Auschwitz" T-shirt. The looting and vandalism.

If you wondered why NBA coaches and players were asked about and addressed what happened, it’s because they noticed how protesters and rioters to racial and social injustice were treated and how Wednesday’s rioters were treated for the most part.

There is also major difference about what protesters, and yes, rioters, did over the summer. They were speaking out against social and racial injustice, not storming the Capitol because they were unhappy about election results many have been duped into believing were fraudulent.

Celtics players kneel during the playing of the national anthem prior to the game against the Heat at American Airlines Arena. (Photo: Jasen Vinlove, USA TODAY Sports)

“There is two split, different Americas,” he said. “In one America, you get killed by sleeping in your car, selling cigarettes or playing in your backyard. In another America, you get to storm the Capitol and no tear gas, no massive arrests, none of that.”

Miami’s Jimmy Butler echoed Brown: “We see the two different U.S.A.s that we live in. We came to the conclusion to hoop. But we know what it is. You can’t fool us. You’re not fooling nobody else. It’s just sad. Everybody sees it. Everybody knows it now. You can’t say you don’t understand it.”

It was a common sentiment repeated by players, including Miami’s Andre Iguodala and Bam Adebayo and Boston’s Jayson Tatum.

In fairness, some law enforcement tried to prevent what happened Wednesday, and those videos emerged as the day progressed. One woman was shot and killed. But police were not prepared to stop people from entering the Capitol or commandeering its steps. It took hours to secure the building, and it seemed a long time for authorities to understand the gravity of the escalation.

His coach Brad Stevens didn’t think the Celtics were going to play Wednesday evening. He would have supported the players' decision.

“2021 is a new year, but some things have not changed,” players from both teams said in a joint statement that was released after a pre-game meeting. “We play tonight’s game with a heavy heart … knowing that protesters in our nation’s capital are treated differently by political leaders depending on what side of certain issues they are on. The drastic difference between the way protesters this past spring and summer were treated and the encouragement given to today’s protestors who acted illegally just shows how much more work we have to do.”

Sixers coach Doc Rivers is 59. He has seen a thing or two in his lifetime.

“It basically proves a point about a privileged life in a lot of ways,” Rivers said. “I will say it because I don’t think a lot of people want to: Can you imagine today if those were all Black people storming the Capitol and what would have happened? That, to me, is a picture that’s worth a thousand words for all of us to see and probably something for us to reckon with again.”

Protesters this summer pushed for a better America. Someone in the Capitol hung a Trump flag.

No one is advocating violence or illegal acts. Those pushing for racial and social justice don’t want criminals to go free. They want equality and justice for all, not just some. They want our democracy to work for everyone.

Wednesday’s attack on the Capitol was not about making America great or better. Fighting for racial and social justice is not a threat to democracy. What happened Wednesday is.

It takes an open eyes, open mind and open heart to understand that.

President Trump spoke to the crowd and urged them to go to the building. Then the crowd turned violent as rioters stormed the U.S. Capitol.