No matter how much time passes, Karl-Anthony Towns will never stop feeling grief.

Sure, the Minnesota Timberwolves star might find some relative comfort playing in games and bonding with teammates. As he has made clear with his words and body language in the past month, however, Towns will never fully recover from his mother, Jacqueline Cruz, and six other family members dying this year due to coronavirus complications.

“You may see me smiling and stuff, but that Karl died on April 13th,” Towns said Wednesday night, referring to the date of his mother’s death. “He’s never coming back. I don’t remember that man. I don’t know that man. You’re talking to the physical me. But my soul has been killed off a long time ago.”

As it pertains to the NBA world, Houston Rockets star James Harden should look at Towns' pain and see why he needs to stop being so selfish.

The NBA issued a $50,000 fine to Harden on Wednesday for violating the league’s health and safety protocols. Harden has defended himself, saying he did not attend a strip club, as some suspected. But that does not matter, necessarily.

Though Harden himself has not tested positive for COVID-19, the NBA still postponed the Rockets’ season opener against Oklahoma City because of too many cases within his team. The league reported that three players "returned tests that were either positive or inconclusive." Four other Rockets were also quarantined because of contact tracing procedures. 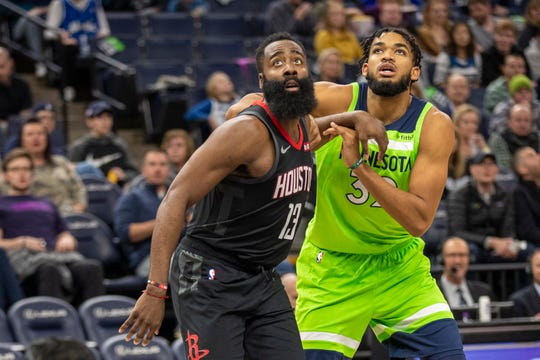 You don’t really need to be epidemiologist to fear that Harden’s reckless behavior could, should it continue, harm teammates, staff members and their families.

What are the potential consequences? Look at Towns, who has spent the last eight months in absolute hell. He has tried comforting his father and other family members over their numerous losses. But he has admittedly struggled.

“I wouldn’t be sitting in this chair if it wasn’t for her,” Towns said of his mom. “I wouldn’t be alive. She saved my life multiple times when I didn’t think I would get here. It’s such a different pain than you all recognize.”

When the NBA decided to begin this season in the middle of the pandemic, it understood its hopes of maintaining revenue and keeping their employees came with significant risk. That explains why the NBA released its schedule for only the first half of the season. The league anticipated it would need some time to reschedule games.

Even with the NBA outlining a 154-page health and safety manual that it has enforced, it seems inevitable the virus will spread even among the players, coaches and staff member that have followed the rules strenuously.

But Harden's reckless behavior increases the risk substantially and could lead to more widespread outbreaks. It surely is not a coincidence that the Rockets are the first game the NBA postponed, and on Day 2 of the regular season, no less.

And is this all happening because Harden has become frustrated with the Rockets and their future?

Opinion: James Harden is trying to be a disruptor, and it's working. His antics could poison Rockets.

All NBA stars are entitled to use their leverage either to pressure their team to make moves to become a contender or go elsewhere to a place that will.

But once training camp started, Harden had an obligation to be professional and make the best of his circumstances. Not only does that entail attending practices regularly and supporting coaches and teammates, in these times it also involves taking the safety protocols seriously.

“I made promises to guys I’ll be here no matter how bad my situation is and how [messed] up my life is,” Towns said. “I’m going to keep being here for these guys regardless of what it is. I’m going to let them see me smile even though inside I’m not smiling whatsoever. I owe these guys as a leader. I owe that to them as a teammate.”

Harden owes that same courtesy to Towns, his own teammates and every NBA employee. It shouldn’t be hard for Harden to know how to isolate. He does that often on the court. Unfortunately, Harden only seems concerned about taking his own shot.

Zion bested by LeBron’s 40, but earns his praise

The sports world reacts to Jeezy vs. Gucci Mane