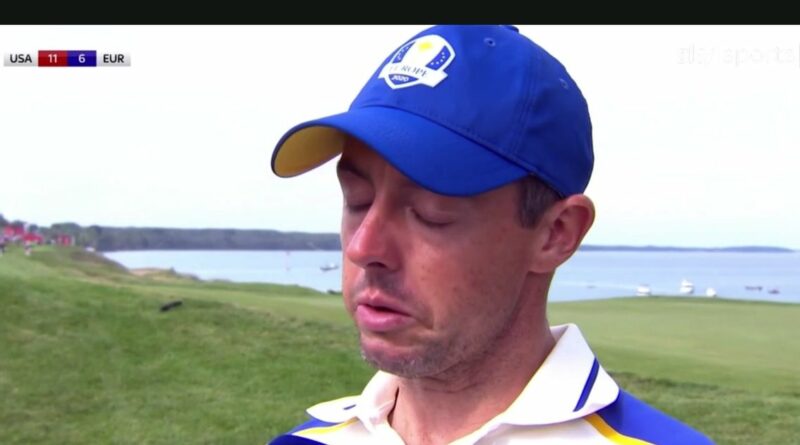 Rory McIlroy received a wave of support after he emotionally apologised for his performances at the Ryder Cup – with former ladies professional Paige Spiranac labelling him a "class act".

Team USA held a strong 11-5 lead going into the final day and then went on to take eight points from the 12 singles matches to seal a record 19-9 victory in the modern era of the Ryder Cup.

It is the largest margin of defeat since 1979 when Team Europe was formed.

McIlroy was winless going into the final day and although he defeated Xander Schauffele in their single’s match, he was visibly distraught.

"I should have done more for [his team-mates] this week," the 32-year-old said.

"I'm glad I put a point on the board but I can't wait to get another shot at this."

Spiranac, who won a pro tournament in 2016 before quitting professional golf, was quick to take to social media in defence of McIlroy.

She wrote on Twitter: "We don’t deserve Rory. What a class act."

What did you make of Europe's Ryder Cup drubbing? Let us know in the comments section.

Spiranac has become quite the social media personality, possessing nearly half-a-million followers on Twitter and over three million Instagram followers.

McIlroy, meanwhile, was not the only European in tears after the result, with Ian Poulter also incredibly emotional after Team Europe were beaten in record fashion.

Poulter was also winless going into the final day, but "The Postman" delivered by beating Tony Finau 3&2 in Sunday’s singles before breaking down in tears after what could be his final Ryder Cup appearance.

Lee Westwood was also visibly emotional in the post-Ryder Cup press conference, admitting he has likely played in his last Ryder Cup after his final day 1 up win over Harris English.

It was a stark contrast to the atmosphere around the US players, who were seen drinking and celebrating with the crowd at Whistling Straits – believed to be around 40,000 strong.

The win is particularly important for the Americans, who had lost nine of the last 12 editions heading into the action at Whistling Straots.

It appears they emphatically put their recent demons at the Ryder Cup to bed, delivering one of the most incredible victories in the event’s history.