Raptors star Kawhi Leonard will continue to sit out one game of the team’s back-to-back series to help manage his recovery from injury.

“The plan is for a little while here to not let him play [both games of] the back-to-backs,” coach Nick Nurse said of Leonard after the Raptors’ 107-98 win over the Suns (per ESPN). “I don’t think we’ve decided how long that’s gonna be yet. We’re going game by game.”

Nurse reassured that Leonard isn’t dealing with any lingering issues from his right quadriceps injury that kept him off the court for all but nine games last season while with the Spurs. Instead, the Raptors are keeping the bigger picture in mind as they still face a long regular season, and there’s some comfort with knowing Toronto currently has the best record in the Eastern Conference.

“I just wanted to get healthy,” said Leonard, who scored 19 points to go with six rebounds and five assists Friday night to help Toronto improve to 8-1. “I feel healthy now, and they just don’t want to rush into things. I don’t either. It’s a long season, so we’re thinking about the long road.”

The Raptors have another back-to-back series coming up (Sunday at the Lakers and Monday at the Jazz), but Nurse isn’t sure which game Leonard will sit out. He did address Leonard’s “jammed foot” and said there isn’t much concern. Leonard missed the final 2 minutes, 42 seconds of Friday’s win after suffering the injury.

“He jammed his foot,” Nurse said. “It didn’t seem to be too bad. They are still evaluating it. But we figured, end of the game, leave him out and let them evaluate it. But it’s not an ankle, or anything. It’s a jammed foot.” 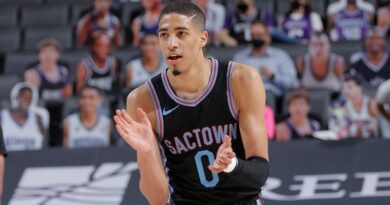 ‘It’s almost like NBA Wall Street’: Top Shot is having a moment

Fallon Sherrock net worth: How much has the darts star earned?