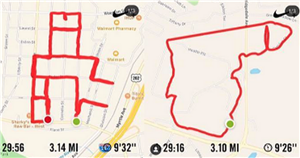 A runner who shares her d***-shaped routes on social media has amassed more than 53,000 Instagram followers.

Claire Pisano, who goes by the name 'D*** Run Claire' on Instagram, began posting what she calls her "d*** runs" after getting lost on a run while visiting her brother in Kansas City for Thanksgiving. After eventually finding her way back, she realised the route produced by her GPS tracker looked like a d***.

Now, almost seven years later, Claire has been on hundreds of d*** runs, with each of her posts amassing thousands of likes from her 53.5k followers. In an interview with Vice Australia in 2019, Claire said: "I love looking for d*** run routes.

"I feel like I should be on My Strange Addiction now that I've heard how that sounds… But honestly, I just love running: It's my favourite way to get a workout in—and drawing a giant d*** across a town is really just a bonus.

"I always plan out the d*** runs and follow the route I've saved on my phone. It's actually kind of tough—especially the more detailed routes, like the ones with hands—and the worst is when I get caught up in a run, miss a turn, and ruin the drawing.

"Then I have to go back and do it again later." Claire also encourages others to do their own d*** runs, adding: "It's fun planning them and it gets me out there on days that I would otherwise skip a run.

"And you can do it literally anywhere. Obviously city grid systems are easy to come up with a drawing, but the best are the smaller towns and neighbourhoods.

"All you need is a keen eye! When they have some kind of awesome detail, I can't help but think that some town planning committee literally built that d*** into their road system.

"Honestly, sometimes they're so detailed and so obvious that I think someone did it on purpose."