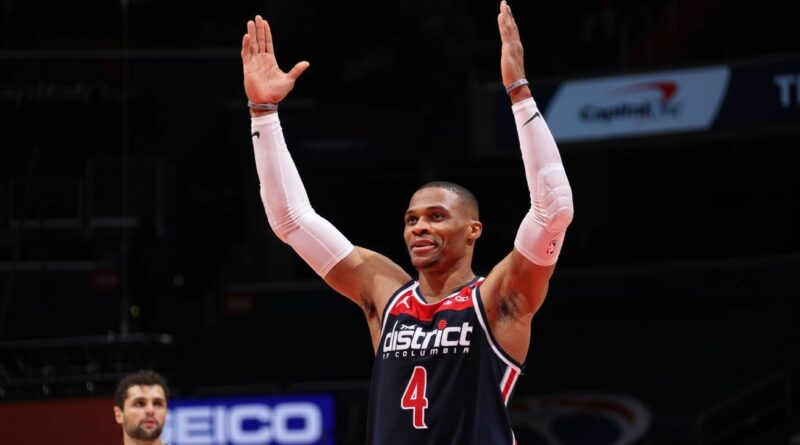 WASHINGTON — Russell Westbrook became the only player with multiple 20-assist, 20-rebound games in NBA history — Wilt Chamberlain is the only other player with one — and the surging Washington Wizards moved closer to Indiana in the Eastern Conference playoff standings by beating the Pacers 154-141 on Monday night.

Westbrook had 14 points to go along with his career-high 21 rebounds and career-high-tying 24 assists, his league-leading 32nd triple-double of the season. He has 178 triple-doubles, three short of Oscar Robertson’s record, with seven games remaining for Washington.

Monday’s performance guarantees that Westbrook will average a triple-double in a season for the fourth time in his career; Robertson is the only other player to do this, and he did it once in 1961-62.

“I used to always say he’s going to probably go down as the third-best point guard ever, but I think he’s passed one. He’s going to go down as probably the second-best, and (No. 1) is obviously Magic. He’s underappreciated. What he does, there are no point guards ever done it, nobody.”

Westbrook didn’t comment on his place in history, but he’s plenty confident about what he’s doing for Washington, which has won 13 of 16.

“Me, personally, I feel like I’m the best playmaker in this league,” said Westbrook, who leads the NBA with 11 assists per game.

Rui Hachimura scored 27 points and Bradley Beal had 26 as Washington scored a season-high 154 and moved within one-half game of Indiana for ninth place in the East. Teams that finish between seventh and 10th will enter the league’s new play-in tournament for the main playoff draw.

The Wizards earned the tiebreaker over the Pacers by winning the first two meetings. The teams meet one more time this season, at Indiana on Saturday.

Domantas Sabonis had 32 points and 20 rebounds, and Caris LeVert scored 33 points for the Pacers, who have lost 3 of 4. Eight Pacers finished in double figures as Indiana scored mostly at will, forcing the high-powered Wizards to work hard deep into the fourth quarter.

Sabonis, who played with Westbrook in 2016-17, had this to say: “There’s a lot of pressure on him to perform, and he comes out and does it.”

Washington finished the first half with a 20-8 run over the final 4:15 to take an 82-66 lead at the break. Westbrook had three of his 11 second-quarter assists during that stretch. It was Washington’s highest-scoring first half of the season.

“Each night I try to figure out ways to be able to impact and pick up my team … it was one of those nights where certain things are rolling,” Westbrook said. “As a point guard … you got to be able to make somebody around you better. And I feel like I take a lot of pride in the effort, the energy and time, and watching film, and to be able to make others around me better. That’s that.”

Westbrook had 14 assists and 12 rebounds at the half, while having taken just three shots.

Westbrook’s layup with 10:23 left in the third clinched his triple-double. His 32 are the fourth-most in any NBA season; he holds the record with 42.

Westbrook, who said he grew up wanting to play in the NFL, had a moment in the second quarter when he looked like one of the best quarterbacks around. He threw a near-full-court pass to Beal, hitting him in stride for a layup, and raised his hands to signal touchdown. It was one of Washington’s franchise-record 50 assists.

ESPN Stats & Information and The Associated Press contributed to this report.

The anxious days and key moves that led to Giannis’ supermax