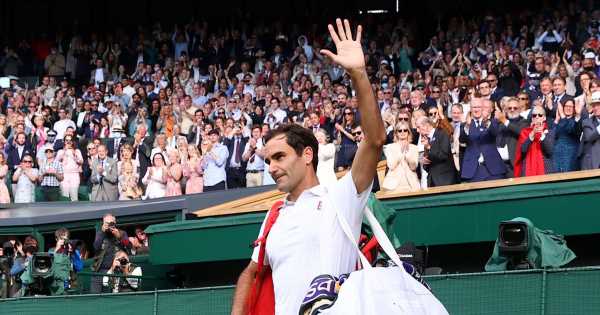 Roger Federer will end a 25-year career when he partners Rafael Nadal in a doubles match at the Laver Cup in London.

The 41-year-old is ending a glittering career which has seen him win 20 Grand Slam tournament titles, including Wimbledon eight times. So it is an incredibly fitting end that the Swiss star ends his career in the capital playing alongside Nadal who has rivalled him for the last 17 years.

Federer's retirement was an enforced one after knee injuries have plagued the star over the last three years. "I'm not sure if I'll handle it all but I'll try," said Nadal ahead of an emotional night. We look back at the other retirements that hurt fans:

Six-time major championship winner Nick Faldo said an emotional farewell to St Andrews in 2015 at the age of 57. Faldo who won the Claret Jug three times posed for iconic pictures on the Swilcan Bridge although he did continue playing in some tournaments afterwards.

"If I'm sensible, that is it. I will do my best to be sensible," said Faldo.

Faldo stayed in the sport becoming a commentator for 16 years in America before making an emotional farewell last month as he announced his retirement.

Football icon David Beckham said an emotional goodbye to football in 2013 while playing for French side Paris Saint-Germain.

The Manchester United and England legend won most honours in the game including six Premier League titles with United and a Champions League winning medal. After 265 games for his boyhood club he went on to play for Real Madrid and LA Galaxy before finishing his career at Paris Saint-Germain, winning the French title in his final year.

I think I'm ready," said Beckham talking to Sky News in 2013. "I always secretly said to myself that I want to go out at the top."

Which sports star were you most hurt to see retire? Leave your views in the comments section

Ashes winner Freddie Flintoff was a household name in cricket but was forced to retire from Test cricket in 2009, and from all forms a year later, due to a recurring knee injury, aged 32.

Flintoff finished his England career on an all-time high helping his country to a 2-1 Ashes win at The Oval and running out Australian captain Ricky Ponting.

"Having been told my body would no longer stand up to the rigours of cricket, I had no alternative," he said in 2010.

"I was told the problems I have been trying to overcome in rehab for the last year, following the latest of a series of operations, would not recover sufficiently to allow a comeback."

He came out of retirement in 2014 to play Twenty20 for Lancashire and also had a spell in Australia playing for Brisbane Heat.

Serena Williams burst into tears earlier this month after playing her 21st and supposedly last US Open tournament last month.

The 23-time Grand Slam champion, couldn't hold back the tears during an interview on court after her third round defeat to Ajla Tomljanovic. She said: "It's been a fun ride, it's been the most incredible ride and journey I've ever been in my life. And I'm just so grateful to every single person that's ever said 'go Serena' in life. I'm just so grateful because it got me here."

Williams has yet to announce exactly when her last professional tennis match will be stating this week that: "I feel it's more of an evolution of Serena." Legendary Manchester United football manager Sir Alex Ferguson retired from his position in 2013 after leading his side to 13 Premier League titles during 27 years at the club.

He finished in style, leading United to one final league crown in the 2012-13 season. He was greeted to a final farewell on the Old Trafford pitch and labelled the "greatest British manager ever".

Ferguson said: "You (the club) have been the most fantastic experience of my life. I've been very fortunate, I've been able to manage some of the greatest players in the country."