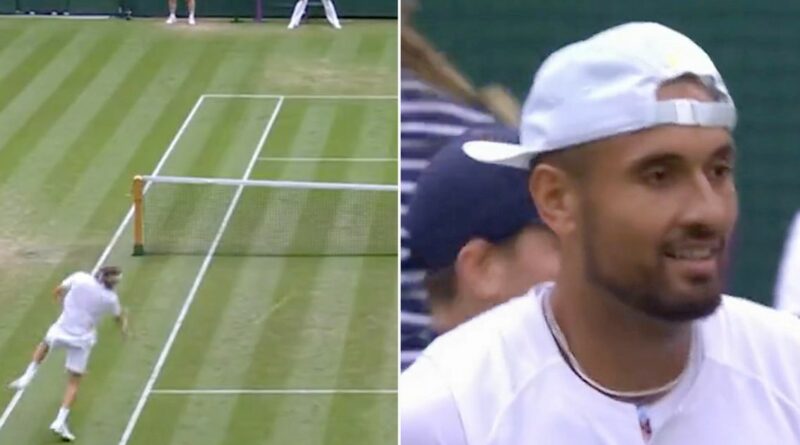 Tensions boiled over as Stefanos Tsitsipas and Nick Kyrgios battled it out in the third round of Wimbledon.

The Greek world number four had taken the first set but was pegged back by the 40th ranked Australian in the second. In response, he smashed a ball away which ended up narrowly missing a crowd member.

In the break between sets, Kyrgios refused to play on as he felt Tsitsipas should be defaulted for his actions when he was only given a code violation. He argued with the match referee, who had come out to speak to him, and the umpire, who he told: "He just hit a ball in the f****** crowd, are you dumb?"

Kyrgios made reference to the 2020 US Open incident which saw Novak Djokovic defaulted for hitting a line judge, but his repeated pleas of "you cannot hit a ball into the crowd and not get defaulted" fell on deaf ears.

The match continued but Tsitsipas again hit the ball away in frustration as Kyrgios took control of the third set. It didn't end up in the crowd this time, but he was given a second code violation and a point deduction regardless.

Should Tsitsipas have been defaulted? Let us know in the comments section below

Kyrgios also fumed at umpire Damien Dumusois. He said: "I cannot believe the amount of s*** this tournament is going to get because of you [it] is insane.

Kyrgios had called for a new referee earlier in the match after a line judge called out on a shot before the decision was overturned.

The NBA Finals: Why the Heat will win the championship – The Denver Post