Home » NBA » Teen US star, 14, who can deadlift 188kg getting offers from top US Universities 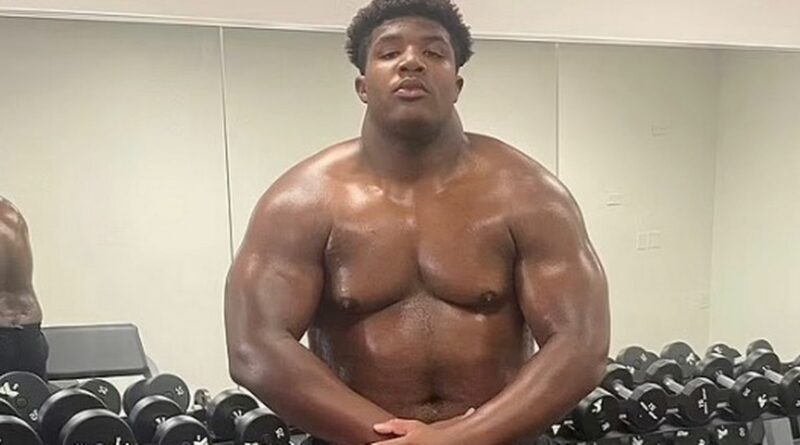 Teenage American Tyler Parker is said to be receiving offers from the USA’s top universities, after the 14-year-old American footballer showed he could deadlift 188kg. Parker’s name has exploded, after clips of the teenager's training went viral on social media.

Despite being just 14-years-old Parker is six-feet tall and weighs a remarkable 134kg. On his HUDL page, Parker claims he is able to bench press 134kg and impressively deadlift a whopping 188kg. The teenage American is also said to be incredibly quick for his size, having completed the 40-yard dash in just 4.9 seconds.

Parker’s impressive numbers have seen him attract attention from some of his nation’s leading universities, with the 14-year-old also said to be as hard-working in a text book as he is on the sports field.

Those interested are said to be The Arizona Wildcats, Portland State, Incarnate Word and Virginia University of Lynchburg, the University of Mississippi, Texas A&M and Louisiana State University. The CEO of the International Recruiting and Placement Platform for American Football Players, Brandon Collier has had high praise for Parker, saying he "can be the number one DT (defensive tackle) in the class of 2025".

Ryan Vidales, a former recruiter for the University of Oregon has also spoken highly of the 14-year-old. Vidales believes Parker will soon become a household name and tipped him for a bright future. He said on social media: “Tyler Parker is a name that we'll be talking about for years to come.

Do you expect Parker to break into the NFL in years to come? Let us know in the comments section below.

"I can't remember a kid coming out of Orange County with his combination of size, speed, and athleticism at 14 YEARS OLD. Can't wait to catch a game at Santa Margarita this upcoming season!" Parker himself has taken to social media to address his new found stardom, as he posted on Twitter: “First Day in the Worlds Eyes since my social media Viral breakout.

"Loved seeing multiple kids smile today by making a kids day by taking one photo means the world to me. It’s bigger than football it’s about the Next Gen to me.. Ready to embrace everything that comes with this.”