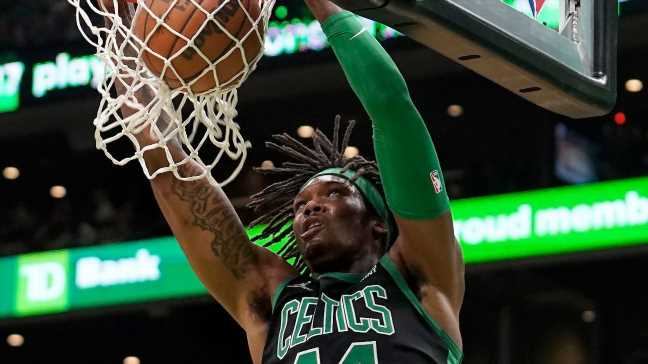 How will an injury to starting center Robert Williams III affect the Boston Celtics’ ability to contend in the Eastern Conference?

After Williams left the Celtics’ blowout win over the Minnesota Timberwolves on Sunday with a knee injury, tests Monday revealed a torn meniscus, which will sideline him the remainder of the regular season at a minimum.

The win was Boston’s 12th by 20-plus points since Jan. 23, as many as any other East team has all season (the Milwaukee Bucks are second overall in the conference with 12 behind the Celtics’ season-long total of 15; no other East team has more than the Charlotte Hornets’ nine).

With Boston also showing the ability to win closer games, the team has climbed into a tie for first in the East with the Miami Heat, a half-game up on the Bucks and Philadelphia 76ers as part of a tier of teams competing for the top two seeds in the conference.

The Celtics had become a favorite of statistical projections and a trendy pick to win the East. How does Williams’ injury change the equation? Let’s break it down.

Although Williams is only sixth on the Celtics in scoring at 10.0 points per game, behind the departed Dennis Schroder as well as reserve Derrick White, that doesn’t measure his key role in Boston’s success.

Opinion: One game not enough to determine if Carmelo Anthony can help Trail Blazers