Yes, okay, fine: James Harden has a strained hamstring that kept him out of the past two games, including last night’s blowout home loss to the Blazers, which dropped the Rockets’ record to 1-5. And yes, Chris Paul missed the two games prior to Harden’s outage—both losses—serving his suspension for fighting with Rajon Rondo. These haven’t helped; the Rockets have only had their two best players in uniform at the same time twice so far. But still! I’m calling it! The Rockets suck butt now!!!!!

Here’s some stuff from last night’s game. I especially call your attention to the first half of the video, in which various Rockets launch various bad shots to various places other than the inside of the hoop.

They shot 32 percent from the floor, and made 10 of their 43 three-point attempts. Woof.

Parting with Luc Mbah a Moute and Trevor Ariza and replacing them with Carmelo Anthony seemed crazy when Houston did it over this past summer, but in retrospect, it, ah, seems even stupider and more floridly ludicrous. The Rockets ran up the NBA’s best regular-season record last season, and got all the way to the seventh game of the conference finals, playing a highly idiosyncratic and customized (hideous) style of basketball—one that employed a nearly zone-like commitment to switching at the defensive end, and at the offensive end spaced the floor around Harden, Paul, and center Clint Capela with spot-up shooters who didn’t need the ball in their hands pretty much ever. Then they jettisoned, in Mbah a Moute and Ariza, the two players who best embodied the long-armed, low-usage, defense-minded interchangeability the Rockets prized, and replaced them with an aging turnstile defender who also happens to be one of the NBA’s worst spot-up shooters. The only part of this that makes any sense is the results.

Here’s a pair of grisly shot charts, courtesy of the NBA’s stats site:

I think what I enjoy the most about these nightmare images from the darkest depths of hell is that Melo has taken just two of his 35 three-point attempts from the corners. Look at that little green stick over there, on the right. A narrow lil’ sandbar of good sense in a maelstrom of insanity. I can’t stop chuckling when I look at it. This is the kind of scoring efficiency you like to see out of the 377th-best defender in the NBA.

He’s walked it back a bit already, but after the Rockets got smushed by 20 points at home last Friday, coach Mike D’Antoni floated the idea of changing how his team plays defense. Somehow it’s both too early and too late for this, but it might not be the worst idea. Last season the Rockets eagerly, and with great success, switched on virtually all screens, accepting the occasional unfavorable mismatch in exchange for the resilience this gave their defensive shape against, for example, Golden State’s constant off-ball movement and floor-warping three-point shooters. But this season, that approach has amounted to letting the opposition pick out and attack Melo on every possession, and … well. Here’s how D’Antoni put it, to ESPN’s Tim McMahon:

That’s definitely a big issue, where they’re just blowing by us. We can’t guard on the perimeter, it looks like.

Not all, or even most, of what ails the Rockets right now can be pinned on their choice to replace two versatile wing defenders and spot-up shooters with, in broad terms, a mailbox with a pair of googly eyes glued to it. They need Harden and Paul back, together; maybe, when that happens, they’ll tear off 10 wins in a row and leap right out of the West’s toilet and back into its playoff hunt. If nothing else it’s hard to imagine a team with Harden, Paul, and Capela at its core not at least making the playoffs, even while wearing Melo like a backpack filled with wet sand. But it seems pretty well undeniable at this point that the roster changes from last season to this one—which, though all parties have insisted otherwise, may well have been much more about lowering the payroll at the direction of new team owner Tilman Fertitta than about anything directly basketball-related—have made them worse. A lot worse. Hilariously worse!

I’m not going to lie to you, reader. I wrote this blog so that I could make fun of Carmelo Anthony, and of the Rockets for getting him. Now I have done that. This blog is over. 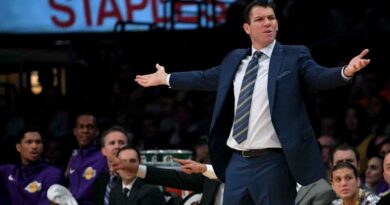 Twitter is waiting for Kings to fire Luke Walton after team blows late lead vs. Hornets