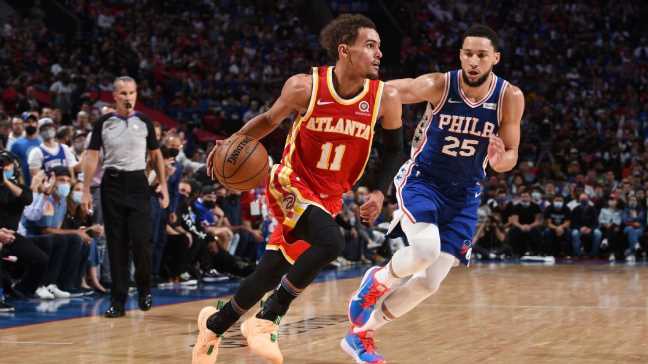 At times he resembles the jittery big brother, fretting over the nuances that could mean the difference between a win and a loss for a young Atlanta Hawks team that has crashed the postseason and had already upset the favored Philadelphia 76ers in Game 1 of their Eastern Conference semifinals series.

As he settled in to watch Game 2, Vince Carter rifled through his mental Rolodex, checking to see if John Collins was using his left hand, hoping that Trae Young remembered to involve his shooters early and often so he will have decent looks in the fourth quarter when the game is often on the line, imploring Kevin Huerter through mental telepathy to attack the rim, even if it means having his shot blocked from time to time.

“These guys look different,” says Carter, who just 14 months ago was sharing the court with the upstart Hawks. “It’s maturity; understanding a little better how the league works, what happens next after four games in five days, how to recover after a long West Coast trip.

“Getting a handle on all of that is what helped slow the game down for me. The one thing we don’t talk about enough in sports is the small anxieties that can build up.”

Atlanta fell behind 20-4 in the opening quarter of Game 2 and walked off down 13 (33-20) after one, shooting 34.8% from the floor and relinquishing 16 first-quarter points to Tobias Harris. Their porous defense also allowed 22 points in the paint.

“There’s a lot of game left!” Young hollered as he jogged to the sideline.

Carter was suitably impressed with what happened next. As the Hawks turned to their reserves, Young made a conscious effort to find his teammates on the perimeter, particularly Huerter and Danilo Gallinari. Huerter finished a perfect 6-of-6 from the floor at the half, and the Hawks’ bench outscored Philly’s 32-0. Back-to-back treys from Huerter and Gallinari cut the Sixers’ lead to two, 57-55, at the break.

“I loved their poise,” says Carter. “Philly is not an easy place to play. Their fans are tough in all sports. [Atlanta] got hit in the mouth, the fans are going crazy at one point, they’re down 20, but they didn’t panic. They just stuck to the script.”

The script, Carter explained, was for Young to exploit the double teams and put his trust in his teammates to make the right plays, which in turn would open things up for him as the game wore on.