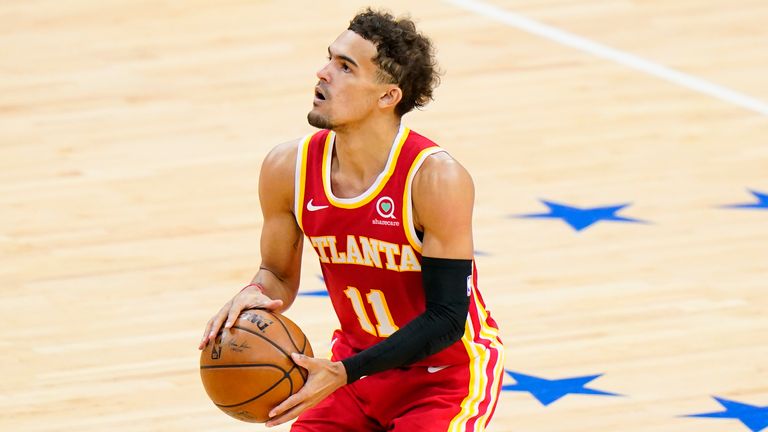 The Atlanta Hawks look to extend their run of good fortune at home on Friday when they host the Philadelphia 76ers in Game 3 of their Eastern Conference semi-final series.

The Hawks, who split the first two games in Philadelphia, have won 13 in a row in Atlanta since a 120-109 loss to the Milwaukee Bucks on April 15.

“I hope fans are ready to rock the house on Friday,” said star guard Trae Young, who erupted for 26 points on Jan. 11 in the Hawks’ 112-94 victory over the 76ers in Atlanta. That was the teams’ lone meeting in the Peach State this season.

Young, however, was limited to 21 points on Tuesday, and the Hawks were unable to contain Joel Embiid for the second straight game in a 118-102 victory by Philadelphia.

“The series is only 1-1. There’s nothing to really be happy about,” said Embiid, who is averaging 39.5 points and 11.0 rebounds in the first two games.

“We have to go over there and try to win both and take one of them at a time.”

While Embiid said he isn’t happy, consider the emotions of Atlanta coach Nate McMillan after seeing 6-foot-10, 17-stone forward Clint Capela prove to be no match for the 7-foot, 20-stone Sixers star.

“(Embiid is) getting too deep; our double-teams are not getting there quick enough. He’s pretty much taking advantage of the deep post up, getting to the free-throw line and scoring,” McMillan said.

“We got to clean that up. He pretty much has had his way in the first two games down on the block.”

The Hawks received another hit with Wednesday’s announcement of forward De’Andre Hunter missing the rest of the playoffs because of a torn lateral meniscus in his right knee.

“We absolutely miss him. We certainly are a better ball club when he’s out on the floor with us, because he just does so many things,” McMillan said of Hunter. “Not only can he defend multiple positions, but he’s also an option on the offensive end of the floor.”

Philadelphia saw an improvement with its perimeter shooting in Game 2, with Seth Curry and Shake Milton combining to make 9 of 11 shots from 3-point range. The 76ers shot 46.2 percent from beyond the arc in Game 2, as opposed to just 34.5 percent in the series opener.

Young followed up a strong shooting performance in Game 1 by making just 6 of 16 shots from the floor and 1 of 7 from 3-point range on Tuesday.

Ben Simmons, who finished second to Utah’s Rudy Gobert for Defensive Player of the Year honours, switched freely with Matisse Thybulle while guarding Young in Game 2.

“Trae Young going downhill is not good for any team, and he did that too much (in Game 1),” 76ers coach Doc Rivers said. “So we have to slide him off a little bit. That’s not really being more physical. That’s just body position.”