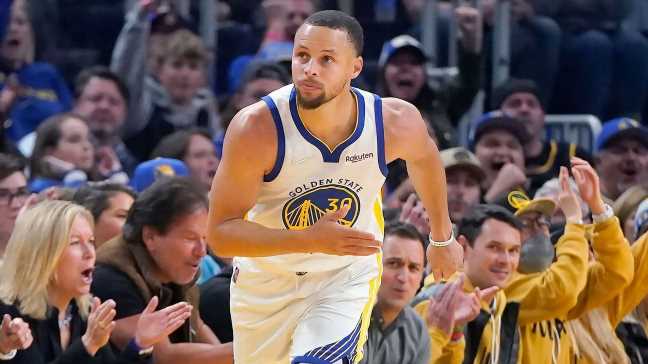 “I’m feeling more and more like myself in terms of trying to maintain the level of intensity it takes to do things out there on the floor,” Curry said Thursday at shootaround. “I’m ready to take more minutes on tonight and make them useful.”

What exactly the increase looks like is yet to be determined. Through the first two games of this best-of-seven series, Curry has averaged about 23 minutes per contest in a bench role.

The plan is to keep Curry coming off the bench until his minute load has been increased enough where he can play his normal rotation.

Following a month-long absence because of a foot injury, Curry came off the bench in Game 2 and scored 34 points to lead Golden State to a 126-106 victory and a 2-0 series lead.

Curry says he takes a different approach to the night when he comes off the bench — particularly his mindset getting ready to play. He’s switched up his pregame routine so he isn’t too full of adrenaline before sitting for the first five to six minutes of the game.

“Usually you do everything for the opening tip,” Curry explained. “I did that Game One and then sat on the bench and I was — I don’t even know — leg was shaking, I couldn’t control myself. My routine had to be switched up a bit so I could be ready for the middle of that first quarter.”

Whenever Curry does return to the starting lineup, the Warriors will have some decisions to make. Jordan Poole, who has excelled through his first two playoff games in Curry’s starting spot could return to a bench role, or Golden State could shift Andrew Wiggins to the second unit and start a three-guard lineup with Curry, Poole and Klay Thompson.

According to Draymond Green and Kerr, it’s a “great problem to have.”

“We’ve got a lot of guys who are capable of starting and big minutes,” Kerr said. “I’ve talked to Jordan, to the younger players — just embrace what the role is … regardless if Jordan starts or comes off the bench, he’s going to play a lot of minutes.”

Added Curry: “Hopefully I’ve demonstrated that at the end of the day, it doesn’t really matter [who starts]. It’s about who’s in that closing lineup, but also about when your number is called, being ready to go.”

76ers left ‘finding ourselves’ as road losses pile up

Which player had the best sneakers in the NBA during Week 11?