There is less than one week until the 2020 presidential election and athletes from leagues across the country are using their platforms to share their political views and encourage their fans to vote.

LeBron James, who has been outspoken on his efforts to dismantle voter suppression in the Black community with his More Than a Vote initiative, brought an influential guest to his HBO show "The Shop: Uninterrupted" Friday night.

On the special edition of the show that adhered to COVID-19 filming guidelines, Obama discussed life during quarantine, the NBA and the importance of voting in the upcoming election.

Before securing a title for the Los Angeles Lakers, James was a part of the group of NBA players that received advice from Obama in August on how to play the season while properly drawing attention to the on-going social justice protests happening around America.

On August 26, the day that the Milwaukee Bucks decided to walkout of Game 5 of the Eastern Conference quarterfinals in protest of the police shooting of 29-year-old Jacob Blake in Kenosha, Wisconsin, Obama tweeted his support.

James and Carter recounted those moments.

"Milwaukee was playing Orlando that day and then I believe OKC and Houston for the next game and then our game was the last game I think it was just us verse Portland." James said on the show. “So when Milwaukee did what they did, and rightfully so, we understood that there was no way that none of us can go on the floor. We stand as a brotherhood. We are a brotherhood in our league and we stood with the Milwaukee Bucks and what they wanted to do."

James shared how much he appreciated the leadership and guidance Obama provided him during that time.

"But there was a time that we wanted to leave too, the Lakers and myself included," James continued. "We were ready to leave and we were trying to figure out if we leave or if we stay, what is our plan? What is our call to action? I am lucky enough to have a friend in the 44th president that allowed me and allowed CP (Chris Paul) to get on the phone with him and get guidance.”

The empty court and benches prior to the scheduled start of Game 5 between the Bucks and Magic on Aug. 26. Milwaukee decided not to play in protest systemic racism and police brutality after shooting of Jacob Blake in Wisconsin. It led to the postponement of the rest of Wednesday's playoff games. (Photo: Ashley Landis, USA TODAY Sports)

"It was close to midnight when CP called with LeBron, Carmelo and I think Westbrook was on the phone," said Obama. "The conversation we had was along the lines of what LeBron spoke about. Protest is useful in terms of raising awareness, but given the power that NBA players had, my suggestion was you use that platform to see if you can start asking for specifics."

Obama also championed James for his leadership that he believes inspires younger athletes and athletes in other leagues.

"When you think about the history of African American athletes, dating back to Jack Johnson the boxer and then you've got Jackie Robinson and Muhammad Ali and folks like Bill Russell in the NBA and Arthur Ashe in tennis. And then for a while, there was a suspension of activism. Because for a time, the African American athlete started thinking in terms of contracts, money, shoe deals, etcetera. To see this new generation without fear and speaking their minds and their conscious, I think you guys are setting the tine for a lot of young people coming up and a lot of young athletes in other leagues."

With nationwide protests after the murder of George Floyd, Carter and James discussed how the country seems as though it took a few steps back in terms of racial equality and the frustration within the Black community.

"Don't let your frustration turn into cynicism where you think nothing can change" said Obama. "The truth is, things have changed, it is just an ongoing battle. It is not a one shot deal when you climb a mountain and just stay there. In that sense, it is like an NBA championship. You get the win. You get the victory and then you have to start all over again."

James says he has definitely seen some change happening since the NBA season in terms of people wanting to make a difference in their communities by voting.

"We love this country. It's the greatest country in the world. But we also want to see more love than hate," said James. "There are a lot of things going on in the community and in our country that is being affected by hate. We know it won't change overnight or next year, or a year after that, but hopefully, in 50 years when my grandkids are walking around, they can say 'my papa was in that moment' when they see change."

Obama commended the efforts of athletes encouraging their following to vote in this upcoming election.

"LeBron and the other athletes have registered tens of thousands of voters who weren't otherwise planning to vote," said Obama. "That is power and will manifest itself in this election and in elections beyond. Because once you get in the habit of voting, you keep on voting." 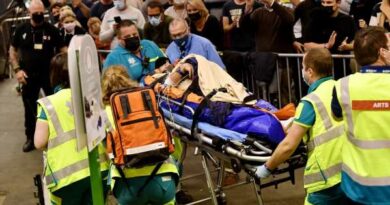