Home » What our experts are looking forward to in Warriors-Lakers 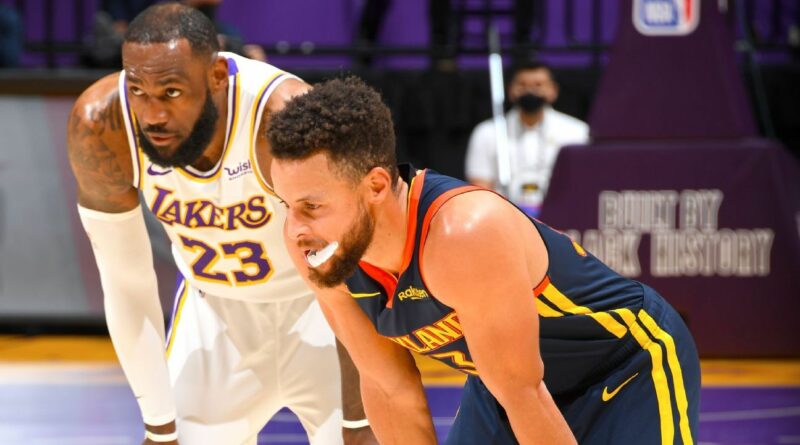 A season after winning an NBA championship in the bubble, the Los Angeles Lakers find themselves in the NBA’s play-in round, needing to win a game just to reach the postseason. The Golden State Warriors, who bounced back after a dismal, injury-plagued 2019-20 to put themselves in a position to return to the playoffs, stand in their way.

When the 2020-21 season tipped off just before Christmas, few would have predicted that these two teams — the past two Western Conference champions — would have been meeting on this stage. It doesn’t quite have the same stakes as past postseason meetings between LeBron James and Stephen Curry, all of which happened in the NBA Finals, but it is still bound to be an exciting game, with a first-round meeting with the Phoenix Suns on the line for the winner. The loser will face possible elimination on Friday.

So what should we expect from Wednesday night’s game (10 ET on ESPN and the ESPN App)? Our experts break it down.

MORE: Will defense get revenge in the playoffs?

1. LeBron James has played only four games in the past two months. What are you expecting from him Wednesday night?

Nick Friedell: LeBron always has the ability to raise his game when needed — and he always seems to enjoy the challenge of going up against Steph. I’m expecting LeBron to be LeBron.

Kirk Goldsberry: Greatness. Maybe that’s unfair, but that’s what I’ve come to expect from the guy who has led his teams to nine of the past 10 NBA Finals. Yes, there are lingering doubts about his ankle, but my expectations for James remain sky-high regardless. I expect him to be the best player on the floor and ultimately expect him to do what’s needed for the Lakers to win.

Dave McMenamin: Something like the James we saw over the weekend: putting up 25, 7 and 7, making plays on both ends and giving his team confidence with his presence on the floor. Frank Vogel said James “had some minor soreness” in his ankle following the back-to-back but was a full participant in Tuesday’s practice and is “good to go” for the play-in.

Ramona Shelburne: Playoff LeBron. Maybe not peak Playoff LeBron, but he always seems to find another gear when the playoffs start. I know he’s still coming back from injury, but I’ve been covering the guy for so long and seen him do so many incredible things, I’m not about to start lowering expectations now.

Andre’ Snellings: I’m expecting to see King James. LeBron averaged about 25 points and 7 assists in 28 minutes in those last two regular-season games, working the rust off as much as possible. For the postseason, I expect he’d play through pain for major minutes if need be. He will be close to his usual level for as long as his body allows him to be.

2. Which player outside each team’s top two will have the biggest impact Wednesday night?

Goldsberry: Dennis Schroder. According to Second Spectrum, nobody in the NBA has guarded Curry as much as Schroeder has this year. In 117 half-court matchups, he has held Curry to an effective field goal percentage of just 40.6, much lower than Curry’s season average of 61. If he can keep that up, the Lakers will be in great shape. If he can’t and Curry goes wild, this game is up for grabs.

McMenamin: Andrew Wiggins for Golden State and Andre Drummond for Los Angeles. Wiggins, the guy the Cleveland Cavaliers traded in order to land Kevin Love and immediately compete for championships in James’ second stint in Cleveland, put up career numbers in field goal percentage (47.7) and 3-point percentage (38.0) while also being one of the league leaders in deflections. Drummond had four straight double-doubles to close out the season, and L.A. won all four of those games.

Shelburne: Andrew Wiggins has quietly become a better defender and shooter this year. With his size and athleticism, that was always a possibility, but we hadn’t seen it, so a lot of folks stopped looking. The Warriors are going to have their hands full defending LeBron and AD. Wiggins could help solve that problem, but he has never been in a situation like this, so to me, he’s a real X factor.

Snellings: Schroder. Like LeBron, he was able to return and play the Lakers’ last two regular-season games to shake off some rust. He’s the secondary offensive engine for the Lakers, and he’s also going to have the task of trying to slow down Curry. Schroder is a stabilizing force for these Lakers and is quietly vital to their playoff aspirations this season.

Friedell: Wiggins. He’s been very solid most of the year, but the difference in his game this season has been the consistency on the defensive end. He has the offensive ability to take some pressure off Steph and the defensive ability to make things at least a little tougher when he gets time on LeBron. Wiggins has shown he has the talent to change games when he’s locked in.

3. What chance do you give the winner of Spurs-Grizzlies of beating the loser of Warriors-Lakers?

McMenamin: Maybe 15%? It will take a top effort from the Spurs or Grizzlies to beat the loser of Warriors-Lakers.

Shelburne: Not much, which is more a reflection on how good the Lakers and Warriors have been playing recently than it is on the Grizzlies or Spurs. The Warriors just beat the Grizzlies in what was effectively a one-game playoff for eighth place, so they should be favored in any matchup. The Lakers would be favored against either team, as long as they are relatively healthy.

Snellings: If they are facing the Warriors, I’d give them about one chance in five to beat them. They’d be pretty big underdogs to get past the synergy and experience of Curry and Draymond Green. If they have to play a healthy Lakers team, I don’t give them much chance at all. Maybe 1 in 20, and that 1 is all about the possibility of injury. I don’t see any other reasonable way the Lakers aren’t in the playoffs by the end of the week.

Friedell: Never say never, especially this season, but both the Warriors and Lakers seem clearly better than both of those teams.

Goldsberry: Anything can happen in one game. It’s why March Madness is, well, madness. That’s why the Wednesday game is so critical. Sure, whoever loses still has another chance at home, but you don’t want to tempt fate, especially in the 3-point era, where variance is king. One of these two squads will be flirting with disaster when they are forced to play in that loser-leaves-town-match Friday night.

4. Finish this sentence: The Lakers will win Wednesday’s game if …

Shelburne: They defend like the top-rated defense in the league. That’s been the bedrock of their team the past two years, and you flat-out have to defend like that against Curry.

Snellings: They don’t suffer any major injuries and are able to play a complete game. The past two times these teams played, in February and March, the Lakers won by an average of 28.5 points. And that was without Anthony Davis, against a healthy Warriors team. The Lakers are just too big, too talented and too deep for the Warriors to defeat them in a game of this magnitude outside of special circumstances.

Friedell: They dominate inside and LeBron and AD play up to their normal level. The Warriors can’t match the Lakers’ size.

McMenamin: They hit 10 or more 3-pointers. They went 30-19 in the regular season when they hit the double-digit plateau for made 3s.

5. Finish this sentence: The Warriors will win Wednesday’s game if …

Snellings: LeBron’s re-tweaked ankle and Davis’ variety of injuries are more serious than reported and neither is able to play at near full strength. In addition, Curry would need to be in one of those zones where he’s dancing while hitting 10 3-pointers to take advantage of any unexpected opportunity.

Friedell: Steph gets rolling throughout, Draymond is engaged and dominant on the defensive end, and Wiggins helps carry some of the offensive load while slowing down LeBron.

Goldsberry: Curry is able to play like he did Sunday and score 40-plus like he did in the win over Memphis.

McMenamin: They keep Anthony Davis off the foul line. The Lakers were just 3-7 in the regular season when Davis attempted three foul shots or fewer.

Shelburne: They get contributions from someone other than Curry. We know Steph has to be brilliant for Golden State to win. We don’t know whether anyone else will be able to create offense if the Lakers throw the kitchen sink at him.

Bonus question. Fact or fiction: The winner of Warriors-Lakers will win the first-round series against the Phoenix Suns

Friedell: I think the Lakers can, especially if LeBron and AD are healthy. I’m not sure the Warriors can win four games against the Suns. It’s not out of the question because of the way Steph has been playing, but Steph’s brilliance doesn’t take away from the fact that the Warriors are still a flawed team.

Goldsberry: Fiction. The Suns have been solid all year long, and they earned the 2-seed. If the Lakers win this game, and if they are able to remain healthy, they will obviously be dangerous — but those are two big ifs.

Shelburne: Fiction. I’m higher on the Suns than most. They’re really solid at both ends, and they have an elite closer in Chris Paul. The Lakers would be favored in a series against them. I’m not sure the Warriors would. But I could see the Suns taking either of them out.

Snellings: Fact, and the draw is extremely unfortunate for the Suns. I think the Suns are good enough to beat any other Western Conference team in a series, but if the Lakers are healthy, they have to be favored to come out of the West, even from a lower seed. If the Lakers aren’t fully right, and/or the Warriors pull the upset, then the Suns have a much better chance to advance, potentially all the way to the Finals.

Charles Barkley fires back at Draymond Green, calls him ‘least famous person in the boy band’