Home » NBA » Which NBA player had the best kicks in the second week of the season?

While the opening week’s sneakers around the league were more about blatant flashiness and contrasting colors to take advantage of the NBA’s new footwear rules, to close the month out, players looked to highlight causes and people close to them with their kicks.

In honor of Breast Cancer Awareness month, San Antonio Spurs forward Rudy Gay donned a simple pink-hued pair of the Puma Clyde Court, spotlighting a tribute and a deeper meaning close to home. Celebrating the life of his grandmother Nell Rae Austin, who fought breast cancer for thirty years before passing in 2013, Gay was looking to utilize his new shoe deal in creating the theme.

“She was always there for us,” said Gay. “Designing these shoes, I remember sitting in Boston at the Puma headquarters, and I said I wanted to do something to commemorate my grandmother. My grandmother loved white shoes.”

In honor of Grandma Austin, Puma will be making a donation to Texas Wings, an organization providing no-cost breast cancer treatment and care to uninsured women throughout the state over the last twenty years. The brand will continue to support causes and organizations close to the athletes throughout the season through a series of additional donations and initiatives.

In a vivid bright green, Washington Wizards point guard John Wall’s latest pair of Adidas were easy to spot from the top of Oracle Arena, as he took to the road with a message for the place he’s called home all this decade. “Who do you do it for?” questioned the panel along his newest BYW X sneakers. The answer — “DC FAMILY” — was prominently embroidered atop, showcasing Wall’s longtime support for the only region he’s known during his NBA career.

His efforts in the DC area have been extensive through the years, headlined by Wall’s $400,000 donation to Bright Beginnings, a longtime center serving homeless children and their parents with shelter, meals and educational opportunities.

As the Los Angeles Lakers headed to Texas for a road matchup against the Spurs, power forward Kyle Kuzma once again wore a retro pair from Kobe Bryant’s Nike series, this time inscribing “RIP Lauren McCluskey” along the midsole, in honor of the recently slain University of Utah track and field star.

“I just wanted to give a tribute,” Kuzma told ESPN’s Dave McMenamin. “I write messages on my shoes from time to time — usually about Flint [Michigan]. I’m thinking about doing it a lot more, with more social issues.”

Elsewhere in the league, Houston Rockets power forward PJ Tucker continued his streak of rare and special edition sneakers, pulling off a duo of decade-old Kobe Bryant classics, including the “McFly” Hyperdunk 2008 and the “Big Stage” Kobe V worn by Bryant during the 2010 NBA Finals.

Boston Celtics point guard Kyrie Irving continued his trend of wearing special editions of his signature series featuring classic themes from Nike’s “SB” skateboarding line, unveiling a new Kyrie 4 with detailing inspired by the coveted “Day of the Dead” Dunk SB from the mid-2000s. As he was leaving the court after a convincing road win in Oklahoma City, Irving spotted a short, bearded fan in full “Uncle Drew” gear, leading him to walk over and hand off his game-worn sneakers in appreciation.

Check out all of the best sneakers of the week around the league below, and vote for your favorite pair. 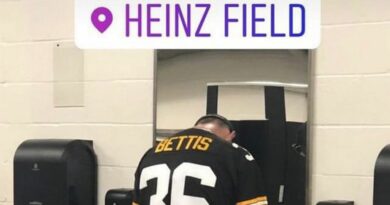