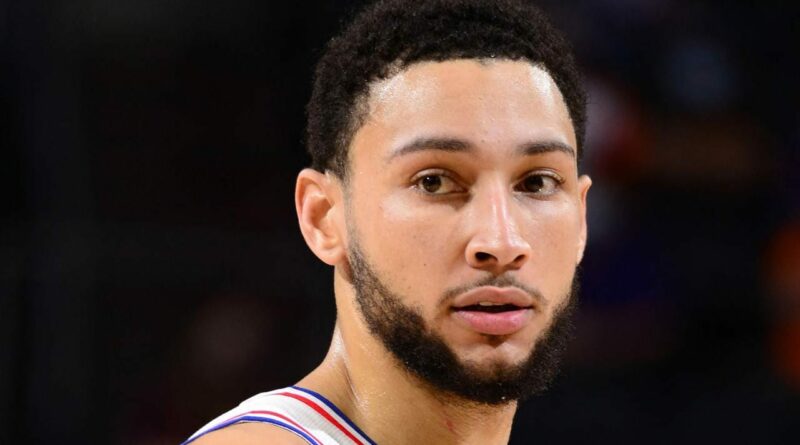 Ben Simmons has done his best to stay out of the public eye in recent weeks but it hasn’t stopped the three-time All-Star from being mocked after Australia beat Team USA 91-83.

As the Boomers perfect preparation for the Olympics continued with the massive scalp, Simmons, who pulled out of the Boomers’ Tokyo campaign to focus on his future in the NBA, was once again in the crosshairs after going cold in the NBA playoffs.

Watch every single game of the NBA Finals Live with ESPN on Kayo. New to Kayo? Try 14-Days Free Now >

It was June 21 that the 76ers were knocked out of the playoffs.

Since then, Simmons has tried to keep a low profile, despite having been spotted with new flame Maya Jama at Wimbledon.

But basketball fans have long memories.

Trade reports have plagued the Aussie, who has long been slammed for his lack of a jump shot and refusal to shoot for three pointers, and were exposed for his weakness with free throws in the playoffs.

Simmons’ shooting struggles in the playoffs, highlighted by his free-throw record of 25 from 73 attempts and his refusal to take an open dunk in the fourth quarter against Atlanta in Game 7, suggested the Sixers would be forced to entertain low-ball trade offers to cut Simmons loose.

Though Simmons can definitely dominate in the paint when he wants to.Source:AFP

So far no moves have been accepted but it’s long been believed that any potential trades may take place much closer to NBA Draft night on July 29.

The NBA hasn’t forgotten though.

Over the weekend at the ESPYs, host Anthony Mackie thanked Simmons for his “humanitarian work” for “building orphanages like this one completely out of his playoff bricks”.

Two young children then came up on stage and said “thanks Ben Simmons”.

However, the trolling online got much worse on Tuesday when the Simmons-less Boomers crushed Team USA 91-83 in a Tokyo Olympics warm-up match.

After an exhibition victory before the World Cup in 2019, it’s the second straight win for the Boomers over Team USA, continuing to build confidence that Australia can finally bring home an elusive Olympic medal.

While Tuesday’s game had nothing riding on it, it has buoyed Australia’s hopes with some of the unsung heroes on the team standing up — including Simmons’ current 76ers teammate Matisse Thybulle.

Australia get the massive boost of a win against the US.Source:AFP

Undeniably a great result for Australia, but some basketball fans still wanted to take a shot at Simmons as the 24-year-old’s name was trending on Twitter.

Some even went so far as to say Australia wouldn’t have won with Simmons on the team.

For everyone upset that Team USA lost to Australia, don’t blame Team USA. It’s not their fault. They didn’t tell Ben Simmons not to suit up for Australia.

What's that Skip?
Not worrying about Ben Simmons getting fouled in crunch-time could end up being a massive advantage for the Boomers?

I don’t reckon Ben Simmons would make the starters of this boomer 5. Don’t @ me

Last week Simmons was dragged into a controversy with former NBA star Andrew Bogut claiming the Victorian government sent a $145m threat to basketball in the state over Simmons playing in exhibition games against Team USA in Melbourne in 2018.

Simmons sat out the World Cup but Bogut said on his podcast Rogue Bogues that if Simmons wasn’t allowed to play that basketball in Victoria will “never get another (cent) again”.

The Victorian Government emphatically denied the claims when approached by news.com.au.

“The Victorian Government made no such threat regarding the State Basketball Centre, which was a 2018 election commitment,” a spokesman for the government said.

“The fact is, Ben Simmons played in neither game and notwithstanding that, all funding commitments by the Victorian Government towards basketball have been honoured and were never in question.”

Enes Kanter trolls Kyrie Irving as he explains why he’ll wear No. 11 with Celtics

Simmons hits first 3 after 0 for 17 start to career