Home » NBA » Zion FAQ: When will the injured Williamson make his season debut? 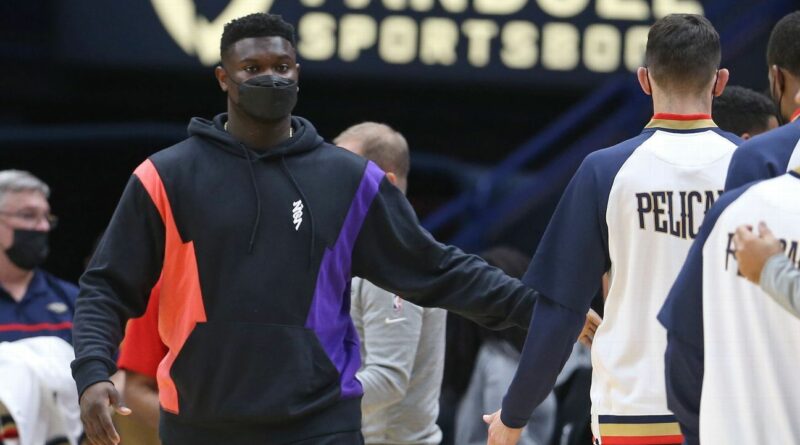 In a sobering statement about the New Orleans Pelicans’ season, the team has announced more delays to Zion Williamson’s return from a broken foot than it has victories this season.

Another one was given Tuesday, and yet again it was not a statement that Williamson is ready to make his debut. It was the most promising update yet, though, as a return might actually be on the horizon for the thrilling but injury-plagued young phenom.

There’s a big hole in the Pelicans’ lineup and offensive output that should be eased greatly by Williamson’s presence. Without him and dealing with other injuries — including to star Brandon Ingram — the Pelicans stumbled to a 2-14 record, losing a league-leading four games this season when ahead by 15 or more points. They are looking to become the first team since the 1996-97 Phoenix Suns to start 1-12 or worse and still play beyond the regular season (the Suns started 0-13).

Here is a simple FAQ updating the situation and the journey that got the team here:

When will Zion make his season debut?

That’s still up in the air, but Tuesday’s announcement does give us the clearest picture yet. The Pelicans announced Williamson has been cleared for contact, starting with one-on-one drills and progressing toward full team workouts. He is expected to undergo another set of imaging on Wednesday, and that should determine if he will be cleared for those workouts. Once he’s cleared for 5-on-5 work, then the Pelicans can settle on a return to play. How long it takes once he’s cleared, though, will depend on how comfortable New Orleans is with his progression.

Didn’t the team say he was going to play on opening night?

It did and so did Williamson himself. On the first day of training camp on Sept. 27, Pelicans executive vice president of basketball operations David Griffin announced that Williamson had fractured his right foot and needed surgery on an unspecified date over the summer. He then said this:

Shortly thereafter, Williamson said: “I expect to be back for the first game. The first official game, I should say.”

They would regret these statements almost immediately, and Griffin would later stumble a bit while walking it back. Williamson himself hasn’t spoken to the media since.

Why have the Pelicans kept pushing back the return?

The doctors Williamson has been working with had not cleared him to participate in contact drills until Tuesday. But the team has not handled this well from a public relations standpoint. It kept the injury and surgery quiet, sources said, out of respect to Williamson and his preference for privacy. Then instead of announcing a complete timetable, it did incremental updates that made it seem like he was having setbacks whether that was accurate or not. That strategy may have helped with the front office’s relationship with the franchise player, but it hurt the team’s credibility with its fan base. It has made it challenging to accept subsequent updates at face value.

When did the Pelicans actually know about this injury?

The Pelicans had a strength and conditioning coach with Williamson in Los Angeles for summer workouts, sources said, so they were aware Williamson was hurt. Perhaps being vague about the timing of the injury — Griffin has said both “early in the summer” and “before summer league” — was to honor Williamson’s request for privacy. But that did invite speculation of whether the team was in the loop, which is naturally a sensitive topic.

Star players get star treatment when it comes to injury announcements. For example, Chris Paul had wrist surgery last summer and it was never announced by the team when it occurred.

Did the Pelicans know he had surgery?

It is true Williamson had a non-team doctor — Dr. Richard Ferkel did the surgery — but this isn’t unusual. Ferkel is a go-to surgeon for NBA players with foot injuries and made a name for himself for successful care of Stephen Curry’s ankles. Griffin said the Pelicans were aware throughout the process and that the Pelicans’ team orthopedist, Dr. Scott Montgomery, consulted. They have still not said when the surgery was.

Does the way the Pelicans handled this show there are issues between the team and Williamson?

There was some concern about Williamson’s connection to the team when he wasn’t around teammates much last summer. He also didn’t go with the team when it moved operations to Nashville, Tennessee, in the wake of Hurricane Ida. Williamson explained this absence, citing the unannounced injury and saying: “When my teammates see me, I want them to always see me with my head up high … I didn’t want to be around them giving off that bad energy.”

Speculation about trust issues has increased with the way the team handled this injury publicly. When Williamson was a rookie, there were some abnormalities in handling his return from knee surgery, which appeared to generate friction. In the 2020 Orlando, Florida, bubble, Williamson and the team were at times evasive about why he left the bubble for a period. Additionally, Williamson publicly supported the re-signing of free agent Lonzo Ball last summer, and he was eventually traded to the Chicago Bulls.

As for his relationship with the front office, again in Williamson’s words from September: “It’s all love with me and Griff … we’re both competitors and we both want to win. Do we disagree on some things? Yeah, who agrees on everything? We don’t. I think that’s what makes our relationship great.”

How sure is it that Williamson will sign a contract extension with the Pelicans next summer?

This is what Williamson said about playing with the Pelicans: “I love it here. I love the city of New Orleans. I don’t want to be anywhere else.”

Of course, rival teams are monitoring the situation. It is important to know the rules are set up to financially motivate players coming off their rookie contracts to stay and extend. Nearly all young stars have re-signed with their teams under the current system.

This is rare, but if a player were to credibly threaten to sign a one-year extension after his fourth year, it could apply pressure to his team to trade him. For example, this is the tactic that got Kristaps Porzingis traded away from the New York Knicks during his third season. Porzingis’ injury problems contributed to the Knicks’ decision.

Williamson’s health is most important, but watching his relationship with the team heading into next summer will hold plenty of interest.

What are the Pelicans doing to make sure Williamson stays healthy and wants to be in New Orleans?

The Pelicans have poured resources, time and energy to protect Williamson’s health. They have changed members of the staff and even changed some of their culinary practices in an attempt to support him. They have talked with him about protecting his body from extra hits. Griffin has stood up for him privately, sending video clips to the league to illustrate how Williamson was getting beat up. When that didn’t work, Griffin ripped NBA referees publicly for not protecting Williamson and was fined $50,000.

So far it has not shown terrific results, but everyone is going to keep trying. His talent is breathtaking. He showed it last season when averaging 27 points on 61% shooting in 61 games, as he displayed some of the most incredible interior scoring since Shaquille O’Neal while ably running the offense. He’s worth all the work and the wait, and the Pelicans and Williamson still have time to make this all come together.