The Raiders, Lions, and Broncos dealt top receivers at the trade deadline, and fortunately for their future efforts to replace some or all of the production of Amari Cooper, Golden Tate, and Demaryius Thomas, the 2019 draft is loaded with impressive wideouts. It’s the best group of receivers in one draft since the famous 2014 class.

There isn’t a top 10 lock at the position, but the middle of the first round to the end of the second round will be the sweet spot for teams to grab talented pass-catchers in April.

Let’s examine the outlook at receiver for the teams that traded established wideouts and pinpoint prospects they could/should target at different stages of the 2019 NFL Draft.

The trade: Amari Cooper to Cowboys for a first-round pick

For 2018: Martavis Bryant replaces Cooper for the time being, while Jordy Nelson is likely to see the most targets among the receivers for the remainder of the season.

The draft: The Raiders have three first-round picks in 2019, and although the outside pass-rush is the largest need, receiver must be addressed early to maximize Derek Carr’s effectiveness.

If they decide to go receiver in Round 1, Anthony Johnson from Buffalo or NC State’s Kelvin Harmon would make the most sense with either their second or third first-round selection. Neither are electric speedsters but win down the field routinely with deceptive long speed, elite ball skills and outstanding body control. They aren’t as explosive as Cooper was when he joined the Raiders in 2015 yet can provide a similar dynamic element to Jon Gruden’s offense. Johnson and Harmon are quality yards-after-the-catch wideouts too thanks to plus-athleticism and balance when absorbing contact at the second and third levels of the defense.

If they want a receiver in the second or third round, Iowa State’s Hakeem Butler would be a logical target. Despite being a somewhat lanky prospect at 6-6 and 225 pounds, Butler plays with a mean streak and has explosiveness when running his routes and after the catch. Because he’s not a super-stiff athlete, it’s a big risk trying to jam him at the line of scrimmage. He boxes out well and can make smaller defenders pay once the ball in his hands.

The trade: Golden Tate to Lions for a third-round pick

For 2018: Kenny Golladay is now the clear-cut No. 1 receiver in Detroit, and the stock is up for Marvin Jones down the stretch. TJ Jones and Brandon Powell should be given more opportunities in the slot. The Lions have gone from a team with a deep receiver group to a club in need of more pass-catching options.

The draft: Tate’s biggest contribution to the Lions came after the catch. He’s led the NFL in yards after the catch since the start of 2014. While I won’t assume Detroit wants the exact type of player they just traded away, offensive coordinator Jim Bob Cooter would likely be interested in a Tate replacement who can at least occasionally win with the ball in his hands in the quick passing game.

Like the Raiders, the Lions need to use an early pick on a defensive end but receiver has become a relatively big need. I’d be surprised if they go wideout in the first round. The second and third rounds seem like more likely spots for Detroit to acquire a future starter at the position. Oklahoma’s Marquise Brown doesn’t have the bulky frame of Tate but is a electric YAC receiver with much more nuance to his game than most would expect from a wideout playing in the Sooners’ spread offense.

I profiled him last week, and based on what I’ve seen thus far, concluded he’s much closer to the Brandin Cooks-Tyreek Hill end of the small, YAC speedster spectrum than he is to the Tavon Austin end. Brown doesn’t simply run go routes and catch passes on bubble screens. He’s been utilized on a variety of routes and lines up relatively often on the outside.

Later, potentially in third round or the early stages of Day Three, a potential sleeper for the Lions is UC-Davis’ Keelan Doss. The small-school star had 115 receptions for 1,499 yards with seven scores in 2017 and has 71 grabs for 676 yards with five touchdowns thus far in 2018. His production should get him a combine invite. At 6-3 and 209 pounds, Doss has outside receiver size, and he’s a fluid athlete in space with small-forward rebounding skills. He works the back-shoulder game well and has no issues catching the ball with his hands outside his frame. His game is a mix of Golladay and Tate.

For 2018: There’s no question now … Emmanuel Sanders is the WR1 in Denver. Speaking of WR1s, that’s the distinction I gave Broncos rookie pass-catcher Courtland Sutton in the 2018 draft class. He was my No. 5 overall prospect due to his freakish combination of elite high-pointing skills and explosiveness and wiggle in the open field. My comparison for him was another former Broncos great … Brandon Marshall. Sutton now steps into the spotlight for the Broncos after a splashy start to his pro career.

The draft: With Thomas’ replacement already on the roster along with crafty fourth-round wideout DaeSean Hamilton waiting behind Sanders, receiver isn’t a gigantic need for the Broncos after trading DT. But once a loaded position for Denver is now lacking depth to a certain degree.

Thomas was a linear explosive receiver and his strong hands allowed him to thrive in the red zone. He didn’t make many defenders miss with lateral cuts, but once he got space, his speed surprised defenders and he was a load to bring to the turf. Ole Miss’ D.K. Metcalf, a dynamic pass-catcher at 6-foot-4 and 225 pounds, would be an intriguing option for the Broncos to groom if they were able to land him in the second round. He recently suffered a season-ending neck injury, which will likely push him out of the first-round conversation. However, he’s a big, physical, downfield threat who provides the same type of skills Thomas had during his prime.

If the Broncos want to wait a little longer to add another receiver, South Carolina’s Bryan Edwards would be a sensible mid-round pick. The 6-3, 220-pounder currently has 31 receptions for 447 yards with five touchdowns after posting a 64-793-5 line in 2017. Beyond his size and physicality, Edwards’ natural hands-catching ability stands out most about him. He plucks the ball out of the air on seemingly every reception, and it helps him in difficult contested-catch situations.

He’s probably not going to run extremely fast at the combine, and his overall skill set is more impressive than his collegiate production. Edwards could be a high-caliber chain-mover in Denver and help divert some attention away from Sutton in the red zone thanks to the fact that, he too, is always open a few feet above his head. 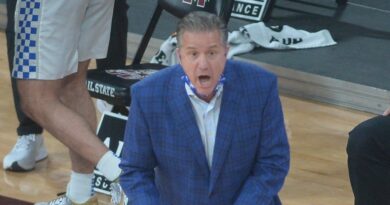 Sixers F Scott gets in fight with Eagles fans