There’s pride on the line when the SEC and Big Ten take each other on in a bowl. It all goes down on New Year’s Day as No. 18 Mississippi State takes on Iowa in the 2019 Outback Bowl. The Bulldogs rank No. 2 in the nation in scoring defense, while the Hawkeyes are No. 11, setting the table for a low-scoring affair. In fact, the Over-Under, or total number of points Vegas believes will be scored, opened at 44.5, but has fallen all the way to 40.5 in the latest Mississippi State vs. Iowa odds. Mississippi State is the seven-point favorite for the noon ET kickoff at Raymond James Stadium in Tampa thanks to two wins over ranked opponents this season, but without any history against each other, it could be tough to make your 2019 Outback Bowl picks. That’s why you’ll want to check out the Mississippi State vs. Iowa picks and Outback Bowl predictions from accomplished college football handicapper Emory Hunt before locking in your selections.

Hunt is the founder and CEO of Football Gameplan, which has been supplying analysis of all levels of football since 2007. The former running back joined SportsLine in 2016 and has provided his followers with winning seasons in college and pro football.

Hunt is having another solid year for SportsLine members and enters the bowl season on an 11-6 run on his point-spread selections. Moreover, he has had a keen eye for the tendencies of games involving Iowa and has nailed five of his last six against the spread picks involving the Hawkeyes. That run includes nailing Nebraska to cover as a 10-point underdog on the road against Iowa to end the regular season. Anyone who has followed him is way up.

Now Hunt is zoned in on Iowa vs. Mississippi State and locked in a strong spread pick for the Outback Bowl 2019. You can only see it at SportsLine.

As both teams prepare for Outback Bowl 2019, Hunt knows that Mississippi State will be looking to take advantage of the absence of Iowa tight end Noah Fant.

Fant led the Hawkeyes with seven touchdown receptions in 2018, but has decided to skip the Outback Bowl to focus on the upcoming NFL Draft. Which means the Bulldogs won’t have to be as concerned with the two-tight sets that Iowa has been able to employ successfully to establish offensive balance.

For the Bulldogs, that means an easier path to Iowa quarterback Noah Stanley for edge rusher Montez Sweat and less intimidating matchups for the Mississippi State safeties and linebackers.

But just because Iowa is missing a major playmaker doesn’t mean the Bulldogs will cover the Outback Bowl spread.

The Hawkeyes will need a big day on the ground to help keep Fitzgerald and the Bulldogs’ offense off the field. Luckily, they have the personnel to grind away.

Led by running back Mekhi Sargent, who rushed for 294 yards and hit pay dirt four times in wins over Illinois and Nebraska, the Hawkeyes averaged nearly 235 yards in their last two regular season games. On the season, they were 5-0 when they ran for more than 200.

We can tell you Hunt is leaning toward the over, but he has also unearthed a critical x-factor that makes one side of the spread a must-back. He’s only sharing what it is, and who to back, at SportsLine.

Who wins Mississippi State vs. Iowa? And what critical x-factor causes one side of the spread to hit hard? Visit SportsLine now to see Emory Hunt’s Outback Bowl pick, all from the renowned expert who consistently crushes the books in college football and is 5-1 on his picks involving Iowa, and find out. 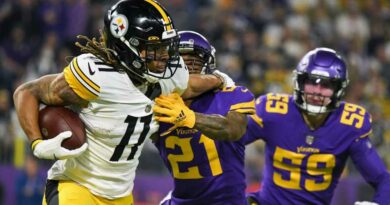 What we learned from Chiefs' 34-20 win over Ravens