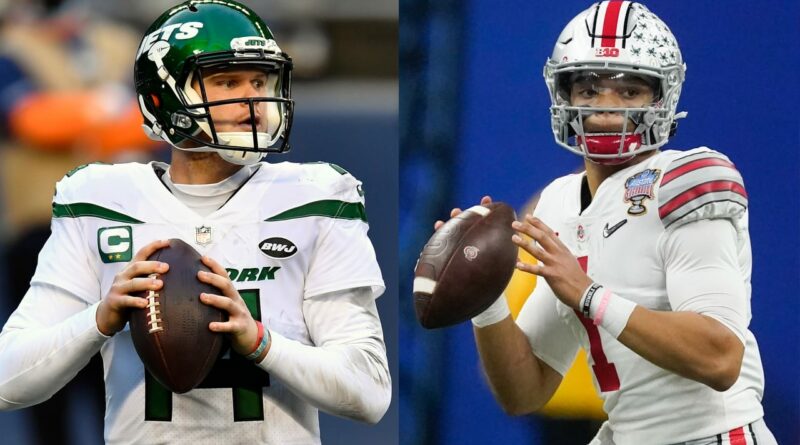 Now that the dust is settling on the frenzied portion of free agency, I’m thinking about possible homes for the top quarterbacks in the 2021 NFL Draft (and one veteran who could be traded). Who fits where? Feels like a perfect time to explore QB-team pairings.

Before I play matchmaker, though, I want to address one player you won’t find attached to a new team below. A week ago, I would have told you that Deshaun Watson was likely to be traded before the draft, but the outlook is far less certain now given the lawsuits recently filed against him. Obviously, he’s one of the most talented players in the league and a trade could have a domino effect on the other top QBs available, but for now, I’m not including him in this exercise.

Here are some hypothetical marriages that would make plenty of sense, with draft prospects listed according to my personal rankings.

I’m still leaning heavily toward Lawrence becoming a Jaguar with the first overall pick in the 2021 NFL Draft, but Jacksonville is doing its due diligence on each of the top quarterback prospects this year. To me, there’s still a chance — albeit a very small one (call it five percent) — that Urban Meyer could decide to go with a different QB.

I know times have been tough in Duval of late, but the Jaguars have a pretty good core offensively, which would give Lawrence — my No. 1 prospect in the draft — a chance to hit the ground running. They added WR Marvin Jones and RB Carlos Hyde via free agency to a group that already included rookie sensation James Robinson as well as talented young receivers D.J. Chark and Laviska Shenault Jr. Jacksonville has made a lot of investments in its offensive line, too. You don’t often see a No. 1 overall pick inherit a supporting cast of this caliber.

GM Joe Douglas has a decision to make between Wilson and Sam Darnold, but for this exercise, we’ll connect the BYU QB to the Jets.

I love Wilson’s fit for Mike LaFleur’s offense. It’s a QB-friendly scheme that features a lot of play-action, and Wilson is really good on the move. Darnold’s supporting cast left a lot to be desired, but I like what Gang Green did in free agency this past week. New York brought in former Titans WR Corey Davis — who’ll team up with Denzel Mims and give the QB two guys with a big catch radius and a lot of toughness — and also added Keelan Cole. The Jets have Jamison Crowder working in the slot, too. Not a bad collection of pass catchers. The O-line is still a couple pieces away, but New York has plenty of draft capital to address the position.

Since I have Wilson as the fit for the Jets, it seemed appropriate that I include a landing spot for Darnold. The fourth-year pro makes sense as a target for the Panthers, Broncos and 49ers. However, I think the Niners have the most urgency to make a deal among those teams because they have a roster that’s ready to win right now.

I believe Darnold would play well next season if he were to stay in New York or go to San Francisco (with both teams running the aforementioned QB-friendly Shanahan offense), but the best thing for him might be to get a fresh start with a new team closer to home on the West Coast. The level of compensation for such a trade would let us know whether he’s being given the starting job or if he needs to beat out Jimmy Garoppolo in a competition.

I know Atlanta reworked Matt Ryan’s contract, which led some people to believe they’re committed to Ryan for a long time, but I’ve talked to two general managers in the past week who told me they fully expect the Falcons to draft a quarterback. Atlanta reworked Ryan’s contract to get under the salary cap. That needed to take place no matter what.

A lot of people connect Justin Fields to Atlanta, since it’s his home-state team, but I like Lance for this spot. I think it makes a lot of sense for him to come in as a 20-year-old and sit behind Ryan until he is ready. He offers tremendous upside and is a great fit for new head coach Arthur Smith’s offense as a more physical and faster version of Ryan Tannehill, whose breakthrough occurred under Smith in Tennessee.

Tannehill was a really sharp young man coming out of Texas A&M, and Lance is the same way. I had a chance to meet the former North Dakota State QB this past week, and he’s a very impressive person when you visit with him. He’s extremely smart, with outstanding football awareness. The thing is, Atlanta could be in jeopardy of getting leapfrogged because that No. 3 pick, currently held by the Dolphins, looks like a prime trade spot for a QB-needy team. I think there’s a legitimate chance we’ll see the first four picks of the draft be quarterbacks.

New England has had an uncharacteristically bold and aggressive offseason. I could see that carrying over into the draft, with the Patriots trading up with the Eagles (No. 6) or Lions (No. 7) to land Fields. Cam Newton is a short-term fix, and this team is equipped to win with a rookie quarterback, especially one who can run around and make plays like Fields does.

He’s the type of player who can do a lot of the things that Newton did in his younger days. I think Bill Belichick, as a defensive-minded coach, would appreciate how difficult it would be to defend the tough and physical Fields.

If QB-needy teams like the Panthers and Broncos sit back at eighth and ninth overall, I think they’re in real danger of getting leapfrogged. New England could be willing to part with a lot of picks to get the former Buckeyes star.

I could see Carolina making a trade for a QB, whether it’s moving up the draft board for a prospect or landing a veteran. In the scenario that’s playing out in this article, it might make the most sense for them to trade down a bit and take Jones. A team looking to move up for an offensive tackle or cornerback could be a good trade partner for the Panthers at No. 8 overall.

We saw Carolina offensive coordinator Joe Brady have success with Joe Burrow at LSU. Burrow could get through progressions, make good decisions and throw the ball accurately. I think Brady will see some of the same traits in Jones. He’s not the athlete that Burrow is, but there are similarities in how they play the game from the pocket.

Mills is coming off a great pro day. He threw the ball well during his workout and is very talented. He comes with a small sample size, though, having made just 11 starts at Stanford. He’s had to overcome knee injuries dating back to high school, but there’s a lot to like about him. He can move around and is accurate. In fact, he reminds me of Minnesota’s current QB1, Kirk Cousins. I could see the Vikings as the landing spot for Mills in Round 3.

I could see Denver going after Darnold or other veteran options, but if the Broncos don’t land one of them, I do believe they’ll try to bring in some competition for Drew Lock via the draft. Mond would be a fit in the third round. He improved in each of his seasons as Texas A&M, finishing things up by winning the MVP award at the Reese’s Senior Bowl in January. He really improved his decision making in 2020. Mond could come in and push Lock.

NFLPA exec: No way to say if camp will open on time

Kiszla: Why is John Elway paying Melvin Gordon $8 million to be average, under-utilized running back? – The Denver Post