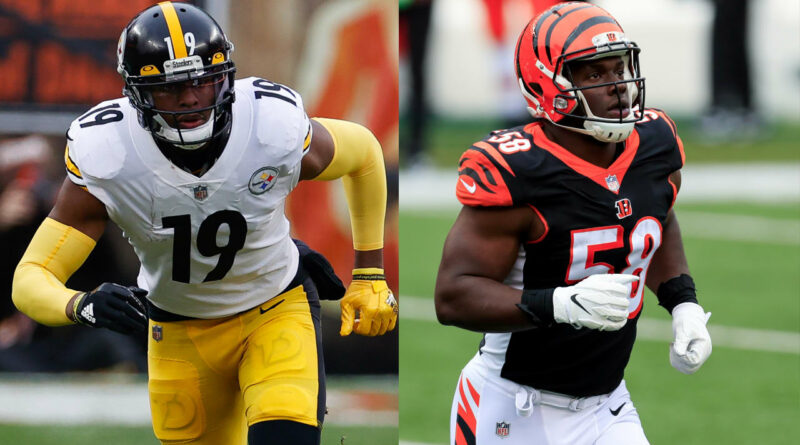 Free agency rapidly turned from modest sale prices to the clearance rack, so there are still values out there to be hunted down in the coming weeks. In the meantime, let’s try to predict which teams will be happy with the contracts they agreed to over the last week …

NOTE: Unless otherwise specified, contract details are sourced from numbers filed to the NFL Players Association and the NFL.

﻿Trent Williams﻿ returning to San Francisco: The No. 1 player on my Top 101 list deserves his own section. Peeking under the hood of Williams’ record-setting deal, the $45 million in guarantees he received is fair for such a difference-maker. It could easily turn into a three-year, $60 million contract, or a four-year, $80 million contract, which sounds plenty reasonable. The price of left tackles will likely skyrocket by then. (If the 32-year-old Williams gets to Years 5 and 6, consider that a major victory for both sides.)

﻿JuJu Smith-Schuster﻿ going back to Pittsburgh: So many of the best signings of the last week were re-signings. There is no mystery as to how Smith-Schuster fits in Pittsburgh, and the Steelers know better than any team the 24-year-old receiver is more than worthy of a one-year, $8 million contract. The Steelers valued JuJu so much they reportedly let another starting veteran (cornerback ﻿Steven Nelson﻿) look for a trade out of town to make room on their cap-strapped roster.

It seems like JuJu is among the most misunderstood players in the NFL. Yes, ﻿Antonio Brown﻿ was right that his ex-teammate isn’t a true No. 1 receiver. But if you need someone to make a tough grab over the middle, block in the running game or break a tackle to pick up a first down, there are few more capable than Smith-Schuster. He has the reputation of a diva because he’s good at social media, but his play would fit in any era of football. With QB ﻿Ben Roethlisberger﻿ presumably in his final year in Pittsburgh, the Steelers’ offense may as well go for it.

Speaking of those re-signings: There is so much less risk when it comes to bringing quality players back in the fold. Re-signings don’t get the same attention as new additions, but I loved the Titans bringing back underrated linebacker ﻿Jayon Brown﻿ on a one-year, $5.3 million contract, despite Brown coming off an injury. Bills linebacker ﻿Matt Milano﻿ returned for a deal similar to what former All-Pro ﻿Lavonte David﻿ received in Tampa (Milano is getting $41.5 million over four years, with $21.5 million in the first two, per NFL Network’s Mike Garafolo, and David is getting $25 million over two), despite the 26-year-old Milano just entering his prime. ﻿Romeo Okwara﻿’s deal in Detroit (three years, $37 million), ﻿Jason Verrett﻿ returning to the 49ers (one year, $5.5 million, per NFL Network Insider Ian Rapoport) and ﻿Shelby Harris﻿ getting a long-term contract in Denver (three years, $27 million, per Rapoport and Garafolo) also made a lot of sense.

﻿Carl Lawson﻿ to the Jets: Lawson was my personal favorite of the edge rushers available. He fills a need for the Jets going back more than a decade, and he’s set up for success, playing next to ﻿Quinnen Williams﻿ in coach Robert Saleh’s scheme. Ultimately, I think he brings more juice to the pass rush than other, similarly priced signings like the Bengals’ ﻿Trey Hendrickson﻿, the Raiders’ ﻿Yannick Ngakoue﻿, the Patriots’ ﻿Matt Judon﻿ and the Lions’ Okwara. And if the Jets and I both happen to be wrong, Lawson’s three-year, $45 million contract could ultimately be for just two years and $30 million.

﻿DeSean Jackson﻿ to the Rams: The money doesn’t matter to me here. My football-watching life is just more fun with DeSean Jackson in it, and I’m not ready for the 34-year-old receiver to go out after two seasons lost to injury. He is the perfect pick for a low-risk, high-reward deal, because D-Jax always looks fast when he’s on the field, including on an 81-yard touchdown from ﻿Jalen Hurts﻿ in Week 16.

The Browns importing the Rams’ secondary: Safety John Johnson has been a leader and glue guy since entering the NFL in 2017. His three-year contract, including $24 million guaranteed, makes so much sense for Cleveland because the Browns were so poor at the position. I’d expect Johnson to see the end of this deal.

I always thought Johnson’s teammate in Los Angeles, ﻿Troy Hill﻿, was annually underrated with the Rams. He battles and will give up some plays, but the Browns got him under contract for $4.5 million guaranteed (per beat reporter Mary Kay Cabot). He essentially has a two-year deal worth $9 million, which is a bargain for a likely starting cornerback.

﻿Curtis Samuel and Ryan Fitzpatrick to Washington: Offensive coordinator Scott Turner’s history with Samuel in Carolina helps to limit the risk here. Turner proved to be a creative play-caller last season, and there’s a lot he can do with players as versatile as Samuel, Antonio Gibson, Terry McLaurin and Logan Thomas﻿. They can all line up in a variety of roles inside and out, with Samuel having some running back chops. His three-year, $34.5 million contract (per Rapoport) is the rare long-term free agent deal I’d expect to be played out to completion as the market adjusts up in the future.

Fitzpatrick, meanwhile, remains strangely underrated. The going rate for mid-level starting quarterback play used to be $25 million, but Washington got him on a one-year contract worth $10 million. The 38-year-old Fitzpatrick is coming off the best two-year stretch of his career, not unlike Tom Brady peaking in his late thirties. Fitzpatrick is not a long-term solution, but he’s worth plenty in a year where most every employee is year-to-year.

The Broncos’ defensive moves: I love that the Broncos’ rewarded Shelby Harris﻿, who has been a gamewrecker the last few years. He has made as big an impact as some of the higher-paid free agents out there.

Ronald Darby also fits coach Vic Fangio’s scheme, where physical corners thrive, so well. In a thin market, three years of quality starts for $30 million makes a lot of sense. The newly formed front office led by George Paton also signed safety Justin Simmons to a long-term deal, ending any uncertainty that would have come with Simmons playing a second year on the franchise tag. Simmons is worth it, and the deal gave the team more cap flexibility to sign former Bears cornerback Kyle Fuller to a one-year, $9.5 million contract (per NFL Networks’ Tom Pelissero). Fuller is a better overall corner than Shaquill Griffin and William Jackson (who were available as free agents), has familiarity with Fangio and signed for far less money.

﻿Will Fuller landing in Miami: Yes, I liked most of the wide receiver contracts. In a year-to-year league, why worry about making a commitment? Fuller tilts any field he’s on and is exactly the kind of explosive playmaker the Dolphins need. All of the focus on Tua Tagovailoa﻿’s slow start tended to miss the reality he was playing with one of the most talent-poor groups of receivers this side of Foxborough. If Fuller balls out after his one-year, $10 million contract, the Dolphins can re-sign him early or consider the franchise tag.

﻿Desmond King going to Houston: One year and $3 million is not much for a feisty slot cornerback who doubles as one of the better special teamers in the league. Of all the Texans’ bargain shopping exercises, I liked the King deal the best.