The 2022 draft class might lack some of the sizzle that drives up TV ratings, but the NFL scouting community is excited about the overall depth and talent of the group. Teams looking for impact players in the early rounds should be able to identify plenty of blue-chip prospects at every position except quarterback.

That statement might come off as a dismissal of the 2022 quarterback class, but while this year’s collection of field generals might lack sizzle, there is some substance to their games. Pittsburgh’s Kenny Pickett, Cincinnati’s Desmond Ridder and North Carolina’s Sam Howell are game-manager types with enough athleticism to make plays on the move. Liberty’s Malik Willis and Ole Miss’ Matt Corral have outstanding talent that could pop at the next level in the right environment.

Although running backs are undervalued in the pre-draft process, the 2022 crew features a few intriguing options with three-down potential. Iowa State’s Breece Hall and Michigan State’s Kenneth Walker III are the headliners of the class, but Texas A&M’s Isaiah Spiller could emerge as a game-changer down the road.

The excitement over the 2022 wide receiver class is valid based on the talent and potential within the group. While there is not a Ja’Marr Chase-level talent in the class, there are plenty of A-plus playmakers with the speed, skills and hands to make an impact from Day 1. USC’s Drake London and Arkansas’ Treylon Burks are the super-sized pass catchers with the capacity to dominate in the red zone. Penn State’s Jahan Dotson and Ohio State’s Garrett Wilson and Chris Olave are big-play specialists with the speed, quickness and burst to produce splash plays on the perimeter. Jameson Williams might be the best WR in the group but a late-season injury could make him a redshirt candidate. If healthy and available, the Alabama standout could make an immediate impact as a deep-ball specialist.

The tight end class is full of “HWS” (height-weight-speed) prospects with intriguing potential. Colorado State’s Trey McBride and UCLA’s Greg Dulcich are the headliners, but Virginia’s Jelani Woods could emerge as the best of the group down the road. Coastal Carolina’s Isaiah Likely is a wild card as a big-play weapon with speed and athleticism.

The offensive line class is loaded with three offensive tackles — NC State’s Ikem Ekwonu, Alabama’s Evan Neal and Mississippi State’s Charles Cross — possessing all-star talent and tools. Although each brings a different playing style to the table, their individual and collective potential should make each a franchise-caliber player on the edges early in their careers. Texas A&M Kenyon Green and Boston College’s Zion Johnson also flash Pro Bowl potential as interior blockers with bully mentalities. Iowa’s Tyler Linderbaum is the top pivot in the class, but questions about his arm length and positional versatility could keep him out of Round 1.

The collection of pass rushers in the 2022 class has captivated the imaginations of defensive line coaches looking for a disruptive force off the edge. Michigan’s Aidan Hutchinson, Oregon’s Kayvon Thibodeaux and Florida State’s Jermaine Johnson II are ultra-athletic quarterback hunters with outstanding first-step quickness and hand skills. Each defender has flashed game-altering potential as savvy pass rushers with disruptive abilities. Georgia’s Travon Walker is a wild card as a super athlete with raw pass-rushing skills. If he refines his technique, he could blossom into a dynamic sack artist as a pro.

Georgia’s Jordan Davis and Devonte Wyatt are the marquee interior defenders in the class. As athletic run-stoppers with flashes of pass-rush skills, they could come off the board as mid-to-late first-round picks. Keep an eye on Connecticut’s Travis Jones and Houston’s Logan Hall as late risers up the board due to their intriguing potential as game-wreckers on the inside.

Despite the plummeting value of off-ball linebackers on paper, the 2022 has a handful of promising prospects with big-play potential. Utah’s Devin Lloyd is a stat stuffer with a versatile game who could make him a star as a pass-rushing freak with outstanding instincts, awareness and ball skills in coverage. Montana State’s Troy Andersen and Wyoming’s Chad Muma are rock-solid playmakers with the diagnostic skills, awareness and athleticism to make plays all over the field as sideline-to-sideline pursuers.

The 2022 class of defensive backs offers defensive coordinators the versatility, instincts and play-making skills that are coveted in a league that is becoming more pass-centric by the day. Cincinnati’s Sauce Gardner and LSU’s Derek Stingley Jr. are five-star playmakers with aggressive mentalities and polished games. Washington’s Trent McDuffie and Clemson’s Andrew Booth are polished cover corners with high IQs, technique diversity and rock-solid tackling skills.

Notre Dame’s Kyle Hamilton is arguably the best player in the draft as a ball-hawking safety with some “thump” tackling skills. Michigan’s Dax Hill is a unicorn in the secondary as a nickel/safety combo player with outstanding instincts, awareness and diagnostic skills. Baylor’s Jalen Pitre is a hybrid slot defender with sticky hands and A-plus blitz skills.

These are the elite prospects in the class — they should rank among the top five players at their respective positions in two to three years.

These prospects are regarded as difference-makers based solely on their talent. They should make immediate contributions as rookies and rank among the top 10 at their position within two to three years.

On the “Move the Sticks” podcast, Daniel Jeremiah and I have previously discussed how scouts will stand on the table for guys they believe will outperform their draft status. In the scouting world, these players are called “red star” guys because they are destined to make their mark in the league despite circumstances. After surveying the 2022 class for players with the right skills and intangibles to perform better than their draft grades, here are my five red-star prospects to watch:

The ultra-talented gunslinger possesses the talent and tools to become a superstar in the right system. Despite the flaws in his game (accuracy/processing speed), Willis’ upside as a dynamic playmaker could entice a creative play-caller to build an offense around his unique skills.

The Wyoming product is an athletic tackling machine with a versatile game that makes him a natural fit as a three-down linebacker. Muma’s potential to impact the game as a blitz specialist or cover linebacker could make him a standout performer from Day 1.

The sticky-fingered pass-catcher is a chain-mover with the potential to thrive as a pro in a possession receiver role. Bell’s combination of instincts, awareness and ball skills should enable him to thrive as a crafty route runner despite lacking elite speed (4.65-second 40-yard dash) and quickness.

There is always room in the league for a playmaker with a knack for putting the ball in the paint. Jones is an explosive punt returner with nine career scores while also showcasing exceptional ball skills and awareness at cornerback.

The explosive pass rusher is a unique find as an off-ball linebacker with A-plus pass-rush skills. Houston is a play-making specialist who should thrive in a defense that deploys him as a Swiss Army knife in sub-packages. 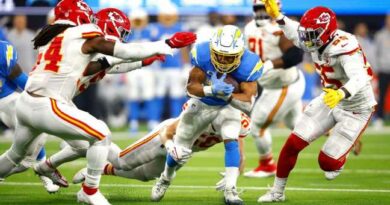 Who was snubbed from the NFL Pro Bowl rosters? Our panel picks the biggest surprises