It was a record-breaking evening of chaos, beginning with the culmination of Georgia pass rusher Travon Walker’s surprising ascent to No. 1 and concluding with his former Bulldogs teammate Lewis Cine being selected at No. 32.

There were plenty of reasons for bedlam, but not the least of which were a record-breaking nine trades in the first round — the most since Round 1 was moved to its own day in 2010, per NFL Research.

Included in those trades were two Browns — wide receivers A.J. and Marquise — who went from Tennessee to Philadelphia and Baltimore to Arizona, respectively. While those two blockbusters for high-profile NFL wideouts were among the highlights, so too was the run on rookie wide receivers. Six wide receivers were selected in the top 20 — beginning with USC’s Drake London to the Falcons at No. 8 and concluding with Arkansas’ Treylon Burks at No. 18 to the Titans — for a common draft era (since 1967) record, per NFL Research.

Entering Thursday’s festivities, much of the intrigue as usual surrounded quarterback, but the looming quandary was just when a QB would finally go, as 2022 was considered a down class of signal-callers. A QB finally went off the board when the Steelers gleefully picked Pitt’s Kenny Pickett at No. 20. It was the latest a quarterback has gone in the draft since the 49ers picked Jim Druckenmiller 26th overall back in 1997. Pickett ended up being the only quarterback to hear his name called, marking the first occasion in which only one QB was picked in the opening round since 2013.

While the Steelers stayed put with their one and only draft pick of the first round, there was a common draft era record nine teams who had multiple selections — led by the Jets triple-dipping. That was made possible by another record, as 10 teams did not draft a player on Thursday, including the last two Super Bowl champions — the Buccaneers and Rams.

And, of course there is the aforementioned Walker and Cine.

Each of them members of Georgia’s national championship team, they bookended a first round in which five Bulldogs defenders were taken, which is the most for a school in the common draft era. In between, former teammate Jordan Davis went to the Eagles at No. 13 after they traded up to get him. Linebacker Quay Walker and defensive tackle Devonte Wyatt were picked 22nd and 28th, respectively. Who took them? Well, the Packers, of course, who took two Georgia defenders in a single first round, but haven’t taken a single wide receiver in the opening round since Javon Walker in 2002.

Oh, what a first night at the 2022 NFL Draft it was, indeed. And there are notable names aplenty remaining. No running backs or tight ends have been selected, quarterback Malik Willis still remains, and so does NFL Network draft analyst Daniel Jeremiah’s final top-20 player — another Georgia Bulldog, Nakobe Dean.

One round of craziness down, six rounds of madness sure to follow. 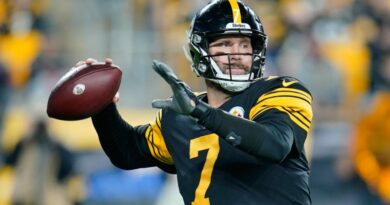 Steelers QB Ben Roethlisberger to be activated from reserve/COVID-19 list, start vs. Chargers