Home » NFL » 2022 NFL season: Which notable records could fall? What milestones might be reached?

The NFL added a 17th game to the regular season in 2021, and many star players took advantage of the extra game and delivered record-setting campaigns. Among the records and milestones set in 2021:

Now, let’s turn the page to the 2022 NFL season and explore notable records that might fall and milestones that could be reached in the NFL’s second 17-game season, and who is in line to accomplish each feat.

Brady reversed course on retirement and will return to the Bucs in 2022 with a chance to reach yet another milestone previously thought to be untouchable: 100,000 career passing yards. Combining his NFL-record regular season (84,520) and postseason (13,049) yardage totals, Brady enters the season with 97,569 career pass yards — 2,431 shy of 100,000 in his career.

The seven-time Super Bowl champion has averaged just over 300 passing yards per game in two seasons with the Buccaneers, putting him on pace (assuming he plays each game) to reach the 100,000 yardage marker at home against the Ravens (Week 8 on Thursday night) or Rams (Week 9). Should Brady “only” rack up yardage at his career-average rate (265.8 pass yards per game), he would be on pace to reach the milestone in Week 10 when the Buccaneers fittingly make history against the Seahawks in the first-ever regular-season game in Germany.

Russell Wilson could become the fifth QB in NFL history to defeat all 32 teams, joining Brady, Brees, Peyton Manning and Brett Favre. Wilson defeated 30 teams during his 10 seasons in Seattle, leaving the first-year Broncos quarterback needing victories over the Seahawks and Chargers to complete the set.

The Broncos open the season with a Monday night contest in Seattle and have a pair of games against the division-rival Chargers (Week 6 on Monday night in Los Angeles; Week 18 in Denver).

Aaron Rodgers has led the NFL in passer rating in each of the last two seasons, both of which resulted in an MVP trophy. While Rodgers would obviously love to join his Packers predecessor Brett Favre (1995-97) as the only players with three consecutive MVP campaigns, history suggests a three-peat as passer rating champion might be even more beneficial.

Only two players in NFL history have led the league in passer rating in three or more consecutive seasons: Steve Young did so four years in a row with the San Francisco 49ers from 1991 through 1994, and Peyton Manning had a three-year streak with the Indianapolis Colts from 2004 through 2006. What do these two streaks have in common? Both QBs led their respective teams to Super Bowl victories in the final season of each streak.

After moving north from Atlanta to Indianapolis thanks to an offseason trade, Matt Ryan should continue to climb the NFL’s all-time passing yards leaderboard in 2022.

Currently eighth on the all-time list, Ryan is 265 pass yards shy of 60,000 and could threaten the top-five with a successful season. Passing yards needed to pass the three QBs directly above him: 1,627 to pass Dan Marino for seventh, 3,706 to pass Philip Rivers for sixth, and 4,354 to pass Ben Roethlisberger for fifth.

Derrick Henry has averaged 100-plus rushing yards per game in each of the last three seasons. Only one player in NFL history has done it in four consecutive seasons: Hall of Famer Jim Brown from 1958 through 1961. Fellow Hall of Famers Eric Dickerson (five) and Barry Sanders (four) are the only other players with four total seasons with 100-plus rushing yards per game.

Nick Chubb is has averaged five-plus yards per carry in each of his first four NFL seasons. He is the only running back and second player (along with Cam Newton) in NFL history to accomplish the feat with a minimum of 100 carries in each season.

If Chubb reaches that threshold again in 2022, he would become the first player to do so in five consecutive seasons at any point in a player’s career. In fact, a fifth career season with 100-plus carries and five-plus yards per carry would tie the most such seasons in an entire career (a record shared by Jim Brown, Barry Sanders and four other players).

Jonathan Taylor has scored 32 total touchdowns over his first two NFL seasons. If he meets his 16-TD average in 2022, Taylor will unseat Hall of Fame running back Barry Sanders (47) for the most touchdowns by any player in their first three seasons.

Mike Evans has had 1,000-plus receiving yards in each of his first eight NFL seasons, the longest such streak to start a career in NFL history. If Evans has reaches the mark again this fall, the Bucs wideout will tie Hall of Famer Tim Brown (nine-season streak in 1993-2001) for the second-longest streak of seasons with 1,000-plus receiving yards in league history. Jerry Rice holds the all-time record (big surprise) with 11 straight 1,000-yard seasons from 1986 through 1996.

Travis Kelce has amassed 9,006 receiving yards over his first nine seasons, which is already the most all time by a tight end in his first 10 seasons.

Since individual sacks were first tracked in 1982, only three players have led the league in the stat in consecutive seasons: Mark Gastineau with the Jets in 1983 and ’84, Hall of Famer Reggie White with the Eagles in 1986 and 1987, and T.J. Watt with the Steelers in each of the last two seasons.

Should Watt win the sack crown for an unprecedented third straight season, the Steelers will also likely extend their own streak of seasons with at least 50 sacks to six — each season since Watt was drafted in 2017. That would break a tie with three teams from the 1980s for the longest streak of seasons with at least 50 team sacks since they were first tracked in 1963.

Since individual sacks were first tracked in 1982, Hall of Famer John Randle (137.5) is the only member of the 100-plus sacks club who played the majority of his career as a defensive tackle. Randle reached the century mark in his 10th season (1999) and in his 153rd career game.

Including his NFL-record 31 career playoff wins, Belichick enters 2022 with 321 total wins as a head coach, three shy of Halas (324) for second-most all-time behind Shula (347). A 10-win season in 2022 would likely vault Belichick to his 20th postseason appearance as a head coach, which would break a tie with Shula (19) for the most in NFL history.

Across the AFC, Chiefs head coach Andy Reid sports a 233-135-1 career record in the regular season. If the Chiefs finish 9-7-1 or better in 2022, Reid will join Shula, Halas and Belichick in the elusive group of coaches who are at least 100 games over .500 in their NFL head-coaching careers.

13) Will the Packers unseat the Bears as the NFL’s all-time winningest team?

The Bears and Packers comprise the NFL’s oldest rivalry, and the Packers have a chance to finally unseat the Bears as the NFL’s winningest team in 2022. The Bears franchise has concluded each of the first 102 seasons of NFL football as the all-time leader in regular-season wins by any team. The 1920 Decatur Staleys won a league-best 10 games, relocated to Chicago for a championship-winning season in 1921, then were renamed the Bears in 1922.

Seventy years later, Chicago entered the 1992 season with 85 more wins (561) than the Packers and Giants (tied for second with 476 wins each). However, 30 seasons of Hall of Fame quarterback play have allowed the Packers (782) to close the gap on the Bears (783) to one win entering the 2022 season.

With a win (at Vikings) and Bears loss (vs. 49ers) in Week 1, the Packers could tie their division rivals and add a compelling subplot to the Week 2 Sunday Night Football Bears at Packers matchup.

14) Matthew Stafford (49,995 career pass yards) needs five passing yards in his next game to tie Drew Brees for the fewest games (183) to reach 50,000 career pass yards all-time. Stafford and the Rams open the against the Bills in the NFL Kickoff Game on Sept. 8.

15) Lamar Jackson (10) needs one game with 100-plus rushing yards to break a tie with Michael Vick for most by any QB in NFL history.

16) Tom Brady (42) needs one fourth-quarter comeback to tie longtime rival Peyton Manning (43) for the most all time. Brady (53) also needs one game-winning drive to tie Manning (54) for most in NFL history.

17) Cordarrelle Patterson (eight) needs one kickoff return for a touchdown to break a tie with Josh Cribbs and Leon Washington for most in NFL history. 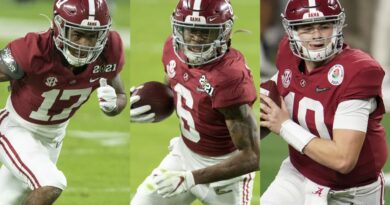