While the Los Angeles Rams are coming off the franchise’s second Super Bowl victory, there are a number of NFL teams looking to bounce back from a disappointing 2021 campaign.

With the start of the 2022 NFL season just over a week away, we ask the question:

Which NFL team will enjoy the biggest turnaround in 2022?

I understand that Aaron Rodgers’ Packers are kings of the NFC North, but the Detroit Lions are looking at the throne, ready to take a shot. They might miss, but they will be closer than they have been in years — with Detroit last winning a division title in 1993. Jared Goff is still on his “prove ’em wrong” campaign after being traded by the Rams in January of 2021, and head coach Dan Campbell wants to turn his passionate speeches into tangible wins. Expect the Lions to win far more than the three victories they recorded last season; this is the year Detroit gets back on the map.

The Denver Broncos haven’t had a winning season since 2016 and haven’t made the postseason since 2015, when they won Super Bowl 50. It feels like all of that is about to change. Coming off a seven-win season, the Broncos made one of the biggest moves of the offseason when they traded for Russell Wilson, who does few things better than winning. Wilson had at least 10 victories in eight of his 10 seasons in Seattle. Denver will remember real quick how it feels to not only win in the regular season — by the way, they have the NFL’s easiest first eight games (.412 opposing win percentage in 2021) — but deep in January.

It’s been over a decade since the Jets were in the playoffs. That drought stops at 11 seasons. General manager Joe Douglas and head coach Robert Saleh have overhauled this roster in the last two years, adding playmakers throughout the offense and defense. It’s a young team, but I believe it has the pieces to go from winning four games in 2021 to playoff contention in 2022.

I hear what you’re saying, David. If not for Zach Wilson’s preseason setback and Mekhi Becton being out for the season with a knee injury, I also would’ve picked the Jets. But … I’m going with the Jacksonville Jaguars. The dysfunction surrounding the team last season was a big reason it held the No. 1 overall pick in April. Bringing in Doug Pederson, a winner who’s high on building culture, along with the addition of big-time playmakers through free agency and the draft makes the Jaguars a much — MUCH — better team already. If Trevor Lawrence takes a step forward in Year 2, this team could shock more than just the Colts this season.

Sure, the Ravens won eight games and were on the cusp of securing a postseason berth last season, but that was without many of their star players, including starting running back J.K. Dobbins, cornerback Marlon Humphrey and left tackle Ronnie Stanley, among others. This team has all those guys back, along with a healthy Lamar Jackson, who’s going to go on an absolute tear if his megadeal doesn’t get done by Week 1. The Ravens have the potential to be one of the best teams in the league, and if they are, they’ll easily surpass their eight wins from a year ago. 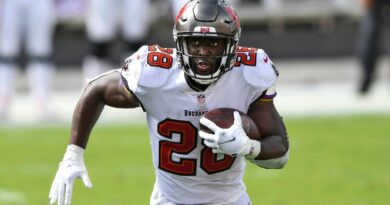