Home » 31-1: A look at every game in Gonzaga’s near-historic season 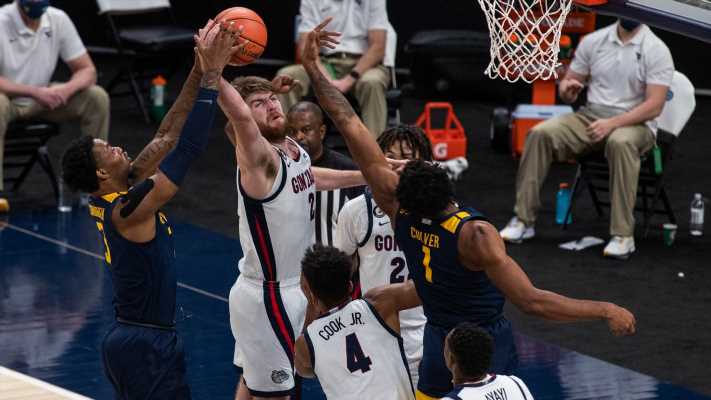 Unfortunately for Gonzaga, that one setback occurred Monday night in the men's college basketball national championship game, 86-70 vs. Baylor.

The Bulldogs were aiming to become the first men's Division I basketball team since 1976 Indiana to finish the season unbeaten.

There weren't many bumps in the road to the Final Four even with a non-conference schedule that included some of the top teams in the country. The train, however, nearly got derailed in the national semifinal against UCLA before going completely off the tracks against the Bears.

Still, there was plenty to celebrate about Gonzaga's near-historic run. So, let's take a look back at how the Bulldogs fared in all 32 of their games this season:

The Bulldogs opened with an impressive offensive explosion in Fort Myers, Florida, on Thanksgiving with three scorers breaking 20 points, led by 25 from Drew Timme. It was the 600th victory in coach Mark Few's career.

The second win at the Rocket Mortgage Fort Myers Tip-Off came a day later as the Bulldogs led by as much as 17 in the first half and cruised home against the Tigers. Timme had 28 points and 10 rebounds. Corey Kispert added 25 points.

The only win of the regular season that was less than 10 points required a rally from the Bulldogs as the Mountaineers led by five at halftime in Indianapolis. Gonzaga put up 53 points in the second half, helped by Joel Ayayi, who scored 21 points.

Playing their first game in 17 days due to a COVID pause, the Bulldogs showed little rust in this top-five showdown in Sioux Falls, South Dakota. It was a breakout performance for freshman Jalen Suggs, who scored 18 of his 27 points in the first half as Gonzaga overcame a 30-point outing from the Hawkeyes center Luka Garza.

Give Northwestern State coach Mike McConathy credit for agreeing to back-to-back games with the Bulldogs, which were all but guaranteed to be one-sided affairs. Kispert led the way in the first encounter with 27 points.

Things went slightly better in the rematch for the Demons, who poured in 61 points after halftime and made the Bulldogs work a bit. But Timme’s 25 points and nine rebounds helped Gonzaga put it away.

Unable to reschedule a canceled game with Baylor, Gonzaga was able to line up this date with the Cavalier in Fort Worth, Texas. Kispert torched Virginia for 32 points, making nine three-pointers, and Timme had 29 points.

This time it was Ayayi setting the tone for the Bulldogs with 17 points and 10 rebounds, going 6-of-8 from the field and 4-of-5 from three-point range. Andrew Nembhard had 10 points and seven assists.

The Zags wrapped up non-conference play with what was essentially a tune-up against the overmatched Trailblazers. Kispert scored 25 points and Ayayi had a second consecutive double double with 21 points and 11 boards.

Gonzaga’s West Coast Conference opener wasn’t a romp from start to finish as the Dons shot well in the first half. But the Bulldogs clamped down on defense after intermission and coasted home behind Kispert’s 26 points.

Kispert led the way with 23 points in the Bulldogs’ first of three meetings with the Cougars. But it was Suggs who stuffed the stat sheet with 16 points, five rebounds, five assists and four steals.

This road romp past the Pilots was notable on two fronts for Gonzaga. The 116 points were a season high, and Ayayi recorded the first triple double in program history with 12 points, 13 rebounds and 14 assists.

The Bulldogs committed 18 turnovers in the game and led the Waves by only four at 43-39 at halftime. But Gonzaga shot 61% in the second half to pull away and Kispert scored 23.

The Gaels did their best to slow the Bulldogs down and were within eight points with just over nine minutes to play. But the Bulldogs put it out of reach with an 8-0 run. Kispert had a team-high 17 points.

After back-to-back slow starts, the Bulldogs returned to form jumping out to a 26-5 lead. Timme had 11 of his game-high 22 points during that opening burst.

The Bulldogs trailed for a significant portion of the first half before taking control with a 15-0 run to lead by 11 at the break. Reserve guard Julian Strawther capped the burst with a three-pointer, steal and layup.

The Waves again started out well, taking a 16-7 lead before Gonzaga put together a 21-2 run to take charge. Six Bulldogs scored in double digits, paced by Timme’s 19.

Gonzaga trailed at halftime for only the second time all season. It took a couple of early second-half dunks by Timme, who finished with 21 points, to spark the decisive run.

At the site of their most recent WCC loss a year earlier, the Bulldogs took charge immediately in Provo, Utah, with a 15-2 start to assure history would not repeat itself. Suggs had 24 points and Timme added 20 with 13 rebounds.

The Bulldogs made short work of their fifth consecutive road contest. Timme was again the driving force with 28 points and 10 boards.

Glad to be back at home with a few fans able to attend, the Bulldogs limited the Gaels to 36% shooting in the first half. Kispert paced the offense with 20 points and Ayayi added 16.

Timme’s 21 points led a balanced attack as the Bulldogs surpassed the century mark once again. The margin grew as large as 44 in the second half before Few emptied his bench.

The Bulldogs matched a program record with their 50th consecutive home victory, but it didn’t come easily as they led by just two at intermission while Timme was in early foul trouble. He scored 16 of his 18 points in the second half to go along with Kispert’s game-high 25 points.

Kispert’s 24 points with six treys helped the Bulldogs set a new record with their 51st home win in succession. The Lions led by five midway through the first half but were ultimately undone by 19 turnovers.

The Gaels, a nemesis in the WCC tournament some years, were no match this time as Gonzaga built an 18-point lead by halftime and cruised home. Timme scored 18 points as the Zags shot 53% for the game.

The Cougars, who would be NCAA tourney bound themselves, used red-hot shooting in the first half to build a 12-point lead. The Bulldogs defended the arc better after intermission but didn’t have it in hand until a pair of late Suggs three-pointers, securing their eighth WCC crown in nine years and 17th under Few.

The Bulldogs missed their first four shots but made 16 of their next 25 to take control against the Spartans. Anton Watson provided 17 points off the bench in support of Kispert’s game-high 23.

The Sooners, the first power-conference opponent the Bulldogs faced since December, were within shouting distance for most of the first half. But they had no answer for Timme, who had 30 points and 13 rebounds as Gonzaga led by as many as 19 en route to the Sweet 16.

Gonzaga Bulldogs forward Corey Kispert (24) and guard Jalen Suggs (1) high five at the end of the first half in the second round of the 2021 NCAA Tournament at Hinkle Fieldhouse. (Photo: Patrick Gorski, USA TODAY Sports)

The Bluejays couldn’t do much about Timme, either. He scored 22, and Nembhard had 17 points and eight assists as Gonzaga shot 59.6%.

The Trojans’ big frontcourt was expected to challenge Gonzaga’s high-octane offense, but that proved not to be the case as the Bulldogs ran out to a 36-15 lead and cruised into the Final Four. Timme was again the scoring leader with 23, and Suggs flirted with a triple double with 18 points, 10 rebounds and eight assists.

Suggs’ banked 40-footer at the overtime buzzer will be seen in March Madness montages for years to come. The game-winner capped off an instant classic that featured 15 ties, 19 lead changes and a slew of huge shots. Timme’s 25 points and Ayayi’s 22 helped the Zags overcome Johnny Juzang’s 29-point effort for the Bruins.

The Bears jumped out to a 9-0 lead and never really let up in capturing the first men's basketball national title in school history. Gonzaga got as close as nine points in the second half but could not overcome the slow start. Baylor was a red-hot 10-for-23 from 3-point range and played tenacious defense against the nation's highest-scoring team.

Bills let another player wear O.J. Simpson’s No. 32 for first time in 42 years