Adrian Peterson knows a thing or two about the running back position.

The Washington Redskins rusher has enjoyed an accomplished career and has shared the field with some of the league’s top backs over the years, including Hall of Famer LaDainian Tomlinson, Le’Veon Bell, Jamaal Charles and Marshawn Lynch, among others.

Peterson can appreciate what others playing his position can do with the football in their hands, so it’s no surprise the 12th-year pro is a fan of New York Giants rookie running Saquon Barkley.

"You can just see with the talent," Peterson said, via John Keim of ESPN. "It’s obvious, him being a rookie and what he’s accomplished so far. That doesn’t happen every year or even two or three or four years [where] that type of talent comes around."

Barkley, the second overall pick of the 2018 NFL Draft, has done his best to justify the Giants’ selection of him as an explosive dual-threat weapon.

For his size, the 6-foot, 233-pound Barkley possesses exceptional game-breaking speed and has produced his share of video game-like moves in the open field through seven games.

Barkley has amassed 481 yards rushing and five touchdowns on 98 carries, averaging 4.9 yards per attempt. He has shown to be a highly capable receiver out of the backfield with 424 yards and two touchdowns on 49 catches.

The Giants’ rookie running back also owns four plays of 50 yards or more from the line of scrimmage, two coming as a rusher and two as a receiver.

Given Barkley’s production, it’s no wonder Peterson, who has 438 yards rushing on the season, has enjoyed watching the rookie excel.

"From what I’ve seen so far he shows some God-given ability," Peterson said. "Great patience, his lower-body strength and balance is amazing. He flows."

NFL fans are in for a treat Sunday when the Giants (1-6) host the Redskins (4-2) at Metlife Stadium with a matchup featuring one of the league’s all-time great rushers in Peterson and an emerging star in Barkley. 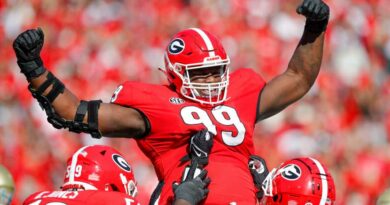 College Football Playoff rankings: Who are the top four teams in fourth CFP poll of 2021?