The outlook for ﻿Aaron Jones﻿ returning this week from injury doesn’t look good, NFL Network Insider Ian Rapoport reported. Rookie RB ﻿A.J. Dillon﻿ tested positive for COVID-19, and backup ﻿Jamaal Williams﻿ is out after being in close contact with his teammate.

If Jones can’t turn the corner quickly, the Packers will head into the primetime matchup with ﻿Tyler Ervin﻿ and ﻿Dexter Williams﻿ as the potential lead backs.

﻿Aaron Rodgers﻿ isn’t fretting the circumstance the offense is put in for Week 9.

“I think as a competitor you’re always excited about the challenges,” Rodgers said., via the team’s official website. “You’d love having your guys in there at full strength, for sure, but there is that fun challenge of going in there without some of those guys and trying to find a way to win.”

The Packers got through missing star wideout ﻿Davante Adams﻿ for two games this season and No. 2 receiver ﻿Allen Lazard﻿ for four games by leaning on Jones and ﻿Jamaal Williams﻿.

Rodgers knows the Packers will just have to find another new way to move the ball this week.

“I don’t feel like we’re ever hamstringed necessarily based on some of the things that we’ve done,” Rodgers said Tuesday. “We’ve had to mix some personnels up and move some guys around to try and get our best guys on the field and give us some advantages through the use of personnel. That’s not going to change.

“I think that’s the beauty in what (coach) Matt (LaFleur) and the offensive staff has done this year is finding creative ways to get our best guys on the field and put them in positions to get the ball in space; no different this week.”

Rodgers also provided his own scouting report for ﻿Dexter Williams﻿ and Ervin.

“I love Dex,” Rodgers said. “Dex has a really good attitude. He’s done a nice job of growing up in the offense and feeling more comfortable with the checks and his responsibilities in pass blocking and route running.

“It seems like he’s a little more settled this year and feeling more confident.”

On Ervin: “He can do a lot. He can play receiver. He can be our fly-option guy. He can play in the backfield. With those two guys in the protocol, we’re going to have to have him play an even bigger role this week to make sure we’re getting our best guys on the field.”

The one bright side for Green Bay, whose running back room isn’t the only one missing key pieces; they face a Niners team that is even more banged up. San Francisco will suit up Thursday night without its starting QB, star tight end, No. 1 receiver, top running back, star defensive ends, and top corner, among others.

The NFL is a survival of the fittest league. With the COVID-19 risk, the team that manages health best was always going to have an advantage.

The Packers have a chance to show once again they can win without several of their top weapons. It helps when Rodgers plays at an MVP level. 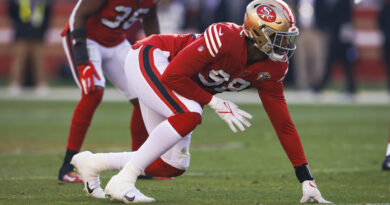