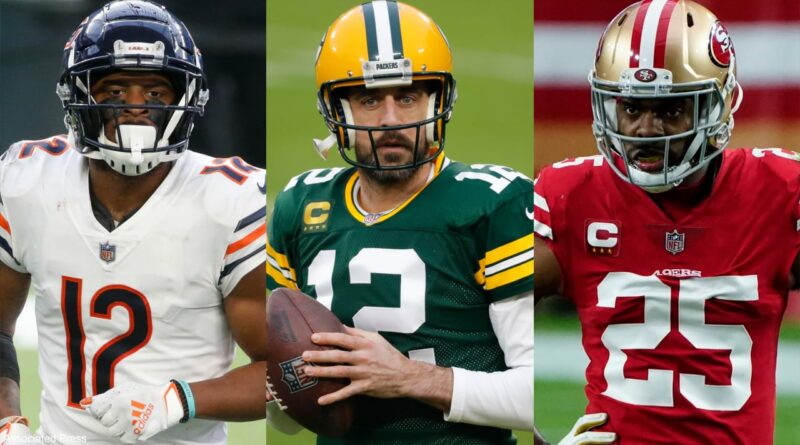 Tennessee Titans general manager Jon Robinson had no problem being candid about what drove his decision to trade for wide receiver ﻿Julio Jones﻿. Like a lot of teams around the NFL, his squad had an opportunity to improve its fortunes — and it simply was too logical for Tennessee to pass up. The Titans had lost both wide receiver ﻿Corey Davis﻿ and tight end ﻿Jonnu Smith﻿ in free agency. The last thing they wanted was to kid themselves about competing in a stacked AFC without as many weapons as they could muster.

In an appearance on NFL Network’s Good Morning Football on Wednesday, Robinson explained the obvious rationale for the move: “My charge is to get as many good players on the team as possible, and I’m excited about the guys we had back on the roster, the guys that we added in the offseason. But when you’re able to acquire a player like Julio and can add him into the mix of our football team, what we try to do offensively, those don’t come around very often. We thought it was a move that we needed to make for us. I know our fans are super stoked to have him here.”

The choice Robinson made is similar to those that other general managers are mulling around the league right now. Jones came with plenty of upside (he’s a seven-time Pro Bowler and a future first-ballot Hall of Famer), but he also had his warts (at 32 years old, he’s coming off an injury-plagued season and his guaranteed salary is a robust $15.3 million). The Titans weighed the pros and cons and found value in pulling the trigger. Now that they’ve made that decision, here are some other moves that would be fun to see happen in the coming months:

We all know we’re going to spend the next few months dwelling on this topic, so might as well address it right off the bat. Rodgers reportedly doesn’t want to be in Green Bay any longer. He didn’t show up for the team’s mandatory minicamp, team president Mark Murphy has openly written about how this feud has divided the fan base, and a couple notable veterans (wide receiver ﻿Davante Adams﻿ and left tackle ﻿David Bakhtiari﻿) have publicly pledged their support for their quarterback. And it’s only June. Just wait until August arrives and this circus really gets rolling. By that point, the Packers will have to be focused on limiting the distractions on second-year quarterback ﻿Jordan Love﻿, who’ll be facing the prospect of starting his first NFL game. The team also will be reliving some of the same chaos that followed the feud that erupted between ﻿Brett Favre﻿ and the organization back in 2008, when the iconic QB retired and then un-retired while the team was preparing to put Rodgers on the field.

Look, we may not know what’s going to make Rodgers happy at this stage. What seems pretty clear at this point, though, is what will make him painfully unhappy, which is spending another minute playing football in Green Bay. It’s hard to see a man who is so reputedly stubborn backing off on his stance. That means the Packers, who have staunchly said they aren’t trading the reigning MVP, should start thinking about how to make the best of a horrible situation.

We’re reaching the point in the offseason where the options for Sherman, a five-time Pro Bowl cornerback, are dwindling. There’s been buzz about him reuniting with Robert Saleh, the former 49ers defensive coordinator who now serves as head coach of the Jets, but New York is far from being the contender Sherman covets at this stage of his career. The New Orleans Saints made sense until they used a third-round pick in this year’s draft on Stanford cornerback Paulson Adebo. There’s been some speculation about Dallas being a logical landing spot — since new Cowboys defensive coordinator Dan Quinn has a history with Sherman dating back to their days together in Seattle — but there’s been no traction on that front.

So, as of right now, the best fit for Sherman remains the 49ers. He’s spent the last three seasons with that franchise and he can still help its secondary, even at age 33. A lingering calf injury limited Sherman to just five games last season, but he did make the Pro Bowl in 2019. If he can be anywhere close to what he was two years ago, Sherman would give San Francisco’s defense a boost. The team re-signed a couple veterans ( ﻿Jason Verrett﻿, ﻿Emmanuel Moseley﻿) and drafted a couple young talents (Ambry Thomas, Deommodore Lenoir), but there’s still room for Sherman to be both a crafty playmaker and an invaluable mentor. Sherman would also have another shot at that second Super Bowl ring he’s been chasing. The Niners still have plenty of talent to make that happen and they’ve publicly stated their willingness to bring Sherman back.

This is one of those situations that makes too much sense. The Philadelphia Eagles have been shopping Ertz for months. The Jaguars don’t have a legitimate receiving threat at that position and are so desperate for help that they’re giving Tim Tebow a look. Joining a bottom-feeder franchise probably wouldn’t be enticing for Ertz at this stage of his career — he turns 31 in November — but he would be a significant upgrade in talent. He had a combined 204 receptions between the 2018 and ’19 seasons. Ertz’s career-worst production last year (36 catches for 335 yards and one touchdown) also had plenty to do with injuries, erratic quarterback play and the overall dysfunction that plagued the Eagles. And let’s repeat this for emphasis: The Jaguars signed a 33-year-old former quarterback who hasn’t played in a regular-season game since 2012 to audition at tight end, which happens to be a position he’s never played.

Somebody is eventually going to make a move for Ertz, and the Buffalo Bills have been rumored as a sensible destination, as well. If the Jaguars want to be serious about putting as many weapons around rookie quarterback Trevor Lawrence as possible, they’d be wise to add Ertz to the mix.

This is one of those good problems to have. The Bears placed the franchise tag on Robinson back in March — a designation that guarantees him $18 million for this coming season — and they’re hoping to consummate a long-term deal before the July 15 deadline arrives for tagged players. The upside is that Robinson has given no indication that he’s prepared to hold out if such a deal doesn’t happen. He’s clearly not thrilled with the franchise tag. He’s also being pretty professional about dealing with the situation.

“Fortunately — contract or no contract — I’m in position to do things that no receiver has done throughout the history of the Chicago Bears,” Robinson said, per the Chicago Sun-Times. “Being one of the first franchises and being around for a long time, there are certain things out there to be had. And for that, I’m very excited.”

Whoa. Talk about deviating from the playbook on how to handle life when you’re a valuable commodity being denied the right to test the open market in the NFL. Robinson clearly has been a great — not just good — soldier for the Bears. He produced 102 receptions, 1,250 yards and six touchdowns in 2020. He’s been the best receiver on a team saddled with quarterback issues throughout most of his tenure there. Now he’s talking about being patient and having great respect for this organization. The Bears don’t need any more reasons to give Robinson the kind of substantial payday he wants. Especially considering they just made an aggressive first-round move for quarterback Justin Fields, who’d greatly benefit from Robinson’s presence for years to come.

Of course, there are two major issues here. One is the Texans’ repeated claims that, despite the quarterback’s unhappiness in Houston, they aren’t trading Watson. The other is the major question surrounding Watson’s off-the-field issues. He’s had 22 civil lawsuits filed against him claiming coercive and lewd behavior. No criminal charges have been filed and his lawyer has denied the accusations. If Watson clears his name, Denver becomes a prime relocation option.

The Broncos are going to be linked to trade talk for a quarterback until one of two things happens: They actually find a reliable starter in the competition between ﻿Drew Lock﻿ and ﻿Teddy Bridgewater﻿ or the two superstar quarterbacks who’ve gone sideways with their current teams resolve their own dramas. There was plenty of buzz surrounding a potential draft-day trade between Denver and Green Bay when reports surfaced of the resentment Aaron Rodgers presently holds towards the Packers. Now there are reports that Watson would love to land in Denver. Broncos safety ﻿Kareem Jackson﻿ recently spoke about this very subject on a podcast with former Denver CB ﻿Aqib Talib﻿. When asked about Watson’s future, Jackson said, “I got a great relationship with Deshaun. I’ve been talking to him the last couple weeks. All he’s been telling me is, ‘Look, Jack, just tell them that’s where I want to be.’ He’s like, ‘That’s where I want to be.’ He’s like, ‘I want to be in Denver.’ “

There’s no reason to think Jackson would be lying about that conversation. There’s also every reason to believe Watson is telling any friend who calls that he’d love to be with their team. This is a man who’s dying to get out of Houston, after all. But the Broncos make a lot of sense. They have plenty of young talent on offense and defense, and an ultra-talented quarterback would instantly make them serious contenders in the AFC. As much as Denver’s selling Lock and Bridgewater right now, this team isn’t getting by Kansas City without some serious firepower on offense.