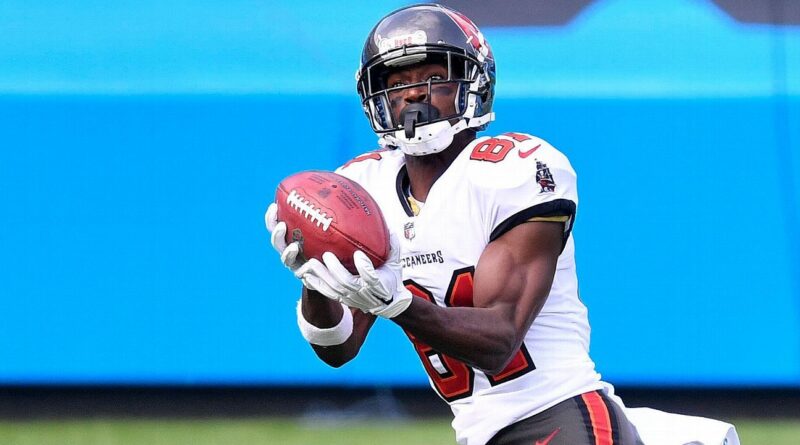 With a first-quarter catch against the Miami Dolphins on Sunday, Brown overtook Pro Football Hall of Famer Marvin Harrison to become the fastest NFL player to reach 900 catches. On first and 10 from the Tampa Bay 25-yard line, Brady found Brown on a slant route for a 10-yard gain.

At the beginning of the second quarter, the Bucs’ stadium PA announcer acknowledged Brown’s achievement. He was given hugs on the sideline by wide receivers coach Kevin Garver, fellow wide receiver Jaydon Mickens and running back Ronald Jones. Other teammates came over to congratulate him on the sideline following Ryan Succop’s 42-yard field goal.

Heading into Sunday’s game against his hometown team, Brown, now in his 12th season and second with the Tampa Bay Buccaneers, needed just one catch to reach the 900-mark in his 142nd career game. Harrison, who spent 13 seasons in the NFL — all with the Indianapolis Colts — did it in 149 games.

Brown would have achieved the milestone sooner had it not been for an eight-game suspension in 2020 due to burglary and battery charges stemming from an incident with a moving truck driver in January 2020. But in Tampa, he’s been reunited with Brady, his mentor, he’s worked to get his life back on track and he’s found a career resurgence.

A timeline of Patriots scandals: Spygate, Deflategate and other controversial incidents under Bill Belichick

Did officials bail out Tom Brady, Bucs by picking up flag on Giants’ tying 2-point attempt?