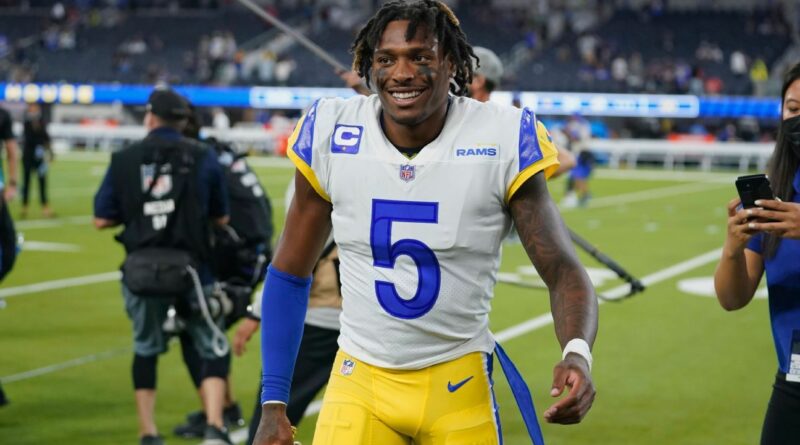 “It was cool for him to be out there celebrating with me,” quarterback Matthew Stafford said after passing for his first touchdown in L.A. in a Week 1 victory over the Chicago Bears. “I was having fun, he seemed like he was having a good time, too.”

He’ll also light up social media if inaccuracies are tweeted his way.

“Sometimes I feel like you’ve got to set the record straight,” Ramsey said.

And this season, Ramsey is not only coming for the NFL’s best receivers, but is after every last player on the opposing team. Perhaps consider this a warning.

“Ain’t no player like him in the National Football League,” three-time NFL Defensive Player of the Year Aaron Donald said. “He can do it all.”

In his sixth NFL season, Ramsey’s confidence remains firmly intact and perhaps has been taken to a new level with a transition from cornerback to all-around defensive back. Bored and discontented for so many seasons standing on an island, watching opposing quarterbacks play keep away as he locked down their top targets, this season Ramsey wants to shut down the entire offense.

In his unique Ramsey style.

On Thursday, Russell Wilson will be the quarterback scanning across the line of scrimmage trying to locate Ramsey when the Rams (3-1) play the Seattle Seahawks (2-2) in an NFC West matchup at Lumen Field (8:20 p.m. ET, Fox/NFL Network).

“He can really obviously cover guys, he can make plays on the ball, he’s a physical tackler, he’s really intelligent too; you can tell on film. But they’ve mixed him around,” Wilson said. “They’ve put him outside, obviously, which is his normal thing. But also they have him inside playing some slot and he’ll pressure off the edge some too.”

“Wherever he lines up and whoever he is covering,” Seahawks coach Pete Carroll said, “you’re in for trouble.”

“The physical nature, the off-the-charts football awareness and intelligence,” said secondary coach Ejiro Evero, a former teammate of Woodson’s in Oakland. “I think that’s one thing that Jalen doesn’t get enough credit for is he is one of the smartest football players I have ever been around.”

But Ramsey, who turns 27 this month, wants to make his own name in his own way.

“I wouldn’t say I model my game after anybody just because I like to be unique in my own ways, make a name for myself,” Ramsey said. “But [Woodson] is, in my opinion, the best defensive back to ever play the game.”

A longtime lockdown cornerback, last season defensive coordinator Brandon Staley — now the head coach of the Los Angeles Chargers — altered Ramsey’s role so he could make a greater impact, seemingly hard to fathom when he already took away half the field. But the move was a success, as he played part-time lockdown corner on the outside and part-time disruptor on the inside.

“Last year was sprinkled in here and there, but this year it’s kind of no boundaries to where I may be during the game. I have no limits to a specific game plan,” Ramsey said. “I don’t know where I’m going to be playing each week.”

He’ll take on offensive linemen, will lock down on the outside, affect, influence and disrupt on the inside. Ramsey can drop into coverage, he can blitz and there’s no doubt at some point this season he’s bound to record his first NFL sack.

“This guy absolutely embraces it and loves it and wants it,” Morris said. “He’s able to go in and mix it up with the big boys, is able to go out and play with the skilled guys and match skill with those guys.”

In the Week 1 rout of the Bears, Ramsey asserted himself with three tackles for a loss in a single series, including a play in which he powered through a block to drive receiver Darnell Mooney deep into the turf for a two-yard setback.

“There’s a difference between tackling and hitting, and I like to hit,” said Ramsey, who was taught the fundamentals of tackling from his dad and youth football coaches. “It’s just sometimes a will and a want to.”

The following week, Ramsey was deep in coverage when he stared down Indianapolis Colts backup quarterback Jacob Eason, then jumped a route to intercept a pass and effectively end any chance of a game-winning Colts drive in a 27-24 Rams win.

“They can never kind of figure out when I was moving, when I was going to be inside, outside, wherever I was at during the game,” Ramsey said, chuckling. “And honestly, I’m right there with them because I don’t know either.”

After a statement victory over quarterback Tom Brady and the defending Super Bowl champion Buccaneers in Week 3, Brady met Ramsey at midfield. The two shared a mutual admiration, and the seven-time Super Bowl champion smiled as he told Ramsey how close he came to taking him down.

“You played great,” Brady told Ramsey, who had eight tackles and pressured Brady twice. “You were — inches.”

“I was, right?” Ramsey responded. “Hold it just a little bit longer next time!”

And in Week 4, despite a Rams letdown in all three phases in a blowout loss to the Arizona Cardinals, Ramsey remained a problem for receiver DeAndre Hopkins, who caught four passes for 67 yards on seven targets — though with Ramsey as the nearest defender on three of those targets, Hopkins caught only one pass.

“He’s probably been the defensive MVP thus far when you look at the impact he’s had on games,” Cardinals coach Kliff Kingsbury said before the win that moved his team into first place in the NFC West. “He’s as versatile of a player as there is and it’s been really impressive to watch the physicality that he’s playing with this season.”

“He likes to be challenged, he likes to move around and likes to do different things,” Morris said. “He is certainly a challenge for me when it comes to finding different ways to keep him motivated and keep him that active.”

Ramsey has 24 tackles this season, tied with teammate Darious Williams for second among NFL cornerbacks. Williams’ presence allows Ramsey to roam as much as he does.

“I just tell D-Will, ‘Let’s switch or let’s move’ or whatever the case may be,” Ramsey said. “Him being able to do that allows me to like play more freely and be able to do it more.”

For Ramsey, this role is part of who he has always been. He just hasn’t previously been in a position to show it. At Florida State, the Seminoles needed him to play cornerback. Then he saw more of the same when the Jacksonville Jaguars selected him with the fifth overall pick in 2016. In his first season with the Rams after he was traded midway through 2019, he locked down the outside. Then, Staley and Morris empowered him to do more.

“I don’t view myself as just a corner, that’s just what I’ve been playing out of necessity of whatever team I’ve been a part of and how I’ve been viewed in the league,” Ramsey said. “I feel like I’m just a defensive back, so I could play anywhere on the field and it’s just part of my game.”

“If you just watched him the whole game,” McVay said, “you’d say that guy is a unique, special talent that plays with great energy and passion every single snap.