The eyes of the college football world will be on Atlanta on Saturday in an SEC championship with heavy College Football Playoff stakes on the line.

No. 1 Georgia will enter the game as a near-touchdown favorite to beat No. 3 Alabama in the conference title game in a win that would be unprecedented for the Bulldogs. Only three times since the first SEC Championship Game has Georgia won the SEC, with wins coming in 2002, 2005 and 2017. Never have the Bulldogs beaten Alabama in the clash, with the Crimson Tide having won in the only two times the sides have clashed in the matchup.

But this Georgia team looks different. Its defense is the best in the nation. It has a balanced offense that averages 40.7 points per game. The Bulldogs are undefeated, have outscored their opponents 488-83 this season and have not had a game finish within a two-touchdown differential since a 10-3 win against Clemson in Week 1.

If ever there was a year for Georgia, this feels like the year. What then for Alabama? Do the Crimson Tide reach the College Football Playoff with an 11-2 record, and no conference title? Sporting News breaks it down.

Before we dive into what needs to happen for the Tide to play for a national chammpionship, it is worth noting that a two-loss Alabama reaching the CFP would be a first. There have only been four teams to reach the playoff without winning a conference championship: 2016 Ohio State, 2017 Alabama, 2018 Notre Dame and 2020 Notre Dame. None of those teams lost more than one game. But this is already an unusual year for the CFP. Cincinnati could be the first Group of Five team to reach the playoff. Clemson is eliminated from contention. Ohio State is all but certainly eliminated from contention. If Alabama doesn’t make it, the field will likely consist of four teams that have never won a CFP title.

It’s also worth considering what the committee is currently looking at with the Crimson Tide. Alabama has looked shaky in recent weeks, dating back to a narrow 20-14 win against LSU on Nov. 6. After a beatdown of New Mexico State, the Crimson Tide were again in a close fight against No. 21 Arkansas, where a late drive delivered a 42-35 win. Then, in rivalry week, Alabama barely survived a scare against unranked Auburn, needing four overtimes to win 24-22.

The recent performances, coupled with a major win by now-No. 2 Michigan over previous No. 2 Ohio State, have dropped the Crimson Tide from its second spot in the CFP rankings to No. 3, just two spots above the cutoff to reach the playoff. Get blown out by Georgia in the SEC Championship, and Alabama’s playoff chances are almost certainly gone.

There’s still a lot to like with the Crimson Tide, which is why this conversation is even taking place. Alabama has a Heisman Trophy frontrunner in Bryce Young — only one Heisman winner has missed the CFP — and ranks among the best teams in all major categories.

That’s a stout resume that few other teams could match, and certainly appears to be one for a team in position to reach the CFP. But the Tide could be blown out by the Bulldogs. They could lose a close game, but have the remaining favorites win their conferences. There could be chaos. To look at Alabama’s chances, we’re breaking the scenarios down into two categories: a blowout loss and a close loss for Alabama.

Alabama gets blown out

If Michigan, No. 4 Cincinnati and No. 5 Oklahoma State win their conference championship games, Alabama is likely out. Even if just two of those teams win, a blowout loss to the Bulldogs could make room for the Fighting Irish to move up from No. 6 to squeak in at No. 4.

Still, there’s a possibility Alabama makes it in with a blowout loss. If Michigan loses to Iowa, the Wolverines will be due for a tumble, and No. 13 Iowa would have a long way to climb to overtake Alabama. A loss by the Cowboys to the Bears would likely eliminate both Big 12 teams from the picture as each would have a win over one another during the season and an unranked loss to another foe. Notre Dame’s resume remains questionable following an 11-1 campaign that features no wins against teams currently in the top 25.

MORE: Every FBS coaching change in 2021

The likelihood of all three teams losing is difficult to imagine, however, albeit not impossible. But again, even just two losing their title games would probably be enough to squeeze the Crimson Tide out of the playoff for only the second time in its history.

Now, what if Georgia just barely scraped by Alabama? This is where things get interesting for the committee and the Crimson Tide. As mentioned, Alabama’s resume is one few can compare.

If even one of Michigan, Cincinnati or Oklahoma State lose on Saturday, Alabama figures to be the most likely team to reap the benefits. The College Football Playoff committee already hinted that the coaching change at Notre Dame could weigh in on its candidacy. Does a Notre Dame team with no ranked wins, a loss to Cincinnati and a brand new head coach make the CFP over an Alabama team with two ranked wins, a close loss to No. 1 Georgia and a three-point road loss to No. 25 Texas A&M? It seems unlikely.

Even if all of Michigan, Cincinnati and Oklahoma State win, there could be a discussion about the final two spots. Cincinnati and Alabama would each have two ranked wins, but Alabama has played in the tougher conference. Oklahoma State would have three ranked wins, but two would have come against the same team — Baylor — and it would be the only team in the CFP with a loss to an unranked opponent. Michigan, already at No. 2, is the only clear lock to join Georgia in the CFP in that scenario. Still, that’s not a situation Alabama wants to be in, and the chances of them making it in under those circumstances seem low.

If all three lose and Alabama keeps its loss close, the Crimson Tide are in. If two lose, the Tide are still probably in based on the strength of their resume. If one loses, it’s perhaps a coin toss if the Tide make it in.

Ultimately, Alabama will need a little bit of help should it lose. Win, and the discussion is over: the Crimson Tide are in, and likely No. 1. Lose, and there’s going to be a lot of fans in Tuscaloosa, Ala., waiting with bated breath. 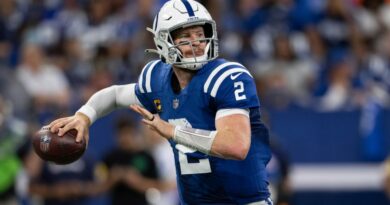 Rating the NFL’s 32 biggest surprises so far: Which will continue, and which are a mirage?