An Alabama fan was beaten while at a bar celebrating Saturday night’s 29-0 victory over LSU and died Tuesday from injuries sustained in the altercation, according to his family members.

Police officers were called to the Ponchatoula Pub early Sunday morning with reports of a bar fight. A volunteer firefighter attended to 46-year-old Robert Bowers, who suffered serious injuries after “being knocked unconscious by two other men at the bar,” according to WBRZ, citing police reports.

Bowers was transported to North Oaks Medical Center in Hammond, Louisiana and was later moved to University Medical Center where he died Tuesday, per the report.

Three takeaways from No. 1 Alabama’s win over No. 3 LSU

The two men who allegedly attacked Bowers were identified as Azia Crockett (27) and Ryan Anthony (24). The suspects have been arrested and booked on felony manslaughter charges, according to WBRZ.

Bowers’ family members told WBRZ that the altercation was “motivated by Bowers’ fandom,” though police have not released specifics about what prompted the fight. Police Chief Bry Layrisson said Tuesday that Bowers did not appear to be the aggressor.

A.J. Green trade fits: Pats, Bills among those who could use WR 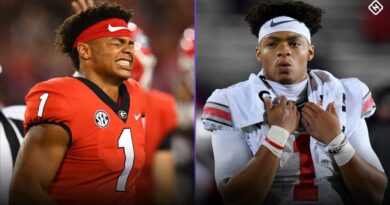 Why did Justin Fields transfer from Georgia? Tracking the star quarterback’s journey to Ohio State

How much longer will Jim Harbaugh last at Michigan after historic loss to Indiana?