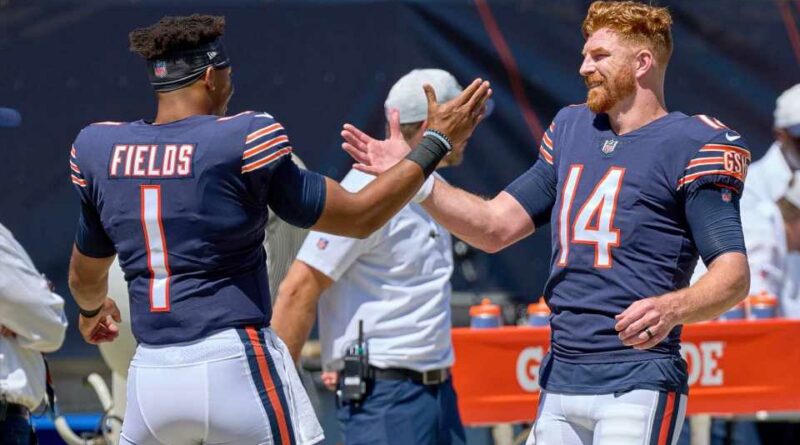 The hype around Justin Fields becoming the Bears’ QB1 is no secret. Football fans everywhere hear about it. Even Andy Dalton is reminded on a daily basis, most likely.

But Dalton isn’t letting the Fields anticipation bother him as he heads into the team’s season opener on Sunday night against the Rams.

“That’s the worst thing you can do, is look over your shoulder,” Dalton said at a news conference Wednesday. “So, understanding that is key. We’re talking about tuning out the stuff you don’t need to focus on and knowing where you need to put your time and effort and all that kind of stuff. I think that’s just where I’m at. You don’t worry about all the other stuff.”

Dalton is aware of the pressure on him Sunday. Depending how he does will determine when Fields makes his official start.

The former Cowboy and Bengal is ready to prove himself this weekend. Last season he was originally a backup quarterback, and he only got to play the majority of the season because of Dak Prescott’s ankle injury in Week 5.

When Dalton was traded to the Bears for a one-year deal in March, Fields had yet to be drafted. There wasn’t much question that Dalton would start, as he was only replacing Mitch Trubisky, a player who had identical stats to Dalton. This trade didn’t exactly spark Bears fans’ interest.

“There’s a lot that’s gone on since March, but all that’s led to this point right here,” Dalton said. “Regardless of everything that’s gone on, we’re here at Week 1, and this is exactly what I wanted. I wanted this opportunity, and now we’re looking forward to making the most of it.”

But then came the NFL Draft, where Fields, the former Ohio State quarterback, was drafted in the first round. While a second-string quarterback should be in the shadow of the starter, the Bears quarterback situation seems to be reversed. Fields’ jersey is the No. 1 seller since Aug. 1, even above Chiefs quarterback Patrick Mahomes. That’s quite the feat for someone who doesn’t have an official start date.

During the preseason, fans booed for Dalton and chanted Fields’ name, which Fields publicly did not appreciate. It’s clear what the fans want, and Dalton knows this. But he seems to soak up this negative energy as his motivation to perform better than expected. We’ll find out Sunday night.