The leaders of the U.S. Military Academy and the Naval Academy announced Friday that hand signals flashed by cadets and midshipmen before last weekend’s Army-Navy football game were not statements of “white power” but instead part of the well-known “circle game.”

The findings were announced five days after the start of an investigation into ESPN cameras capturing the signals during the network’s pregame show. There was sharp division over whether the gestures — index fingers and thumbs joined in a circle, the other three fingers outstretched — were racist. The hand signal, generally associated with saying “OK,” is also associated with “WP,” or “white power.”

The academy leaders rejected the claims of racism in separate statements (via CNN.com).

From Lt. Gen. Darryl A. Williams, superintendent of the U.S. Military Academy: “Last Saturday we had reason to believe these actions were an innocent game and not linked to extremism, but we must take allegations such as these very seriously. We are disappointed by the immature behavior of the cadets.”

From Vice Adm. Sean Buck, superintendent of the Naval Academy: “We are confident the hand gestures used were not intended to be racist in any way. However, we are disappointed by the immature behavior of the two Fourth Class Midshipmen, and their actions will be appropriately addressed.”

According to CNN, the investigating officer assembled over 40 pieces of evidence, including emails and interviews.

The object of the “circle game” is to get another person to look at the “OK” sign, which is delivered underhand. Those caught gazing upon the hand are then punched in the arm. 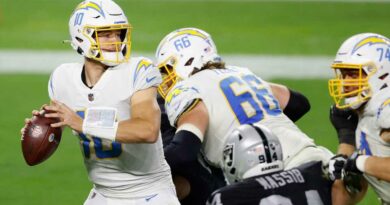 What time is the NFL game tonight? TV schedule, channel for Raiders vs. Chargers in Week 4