The Baker Mayfield era is off to a rough start in Charlotte.

The hopeful answer to the Panthers’ quarterbacking conundrum is 0-2 in his first two starts with his new team, completing 53.6 percent of his passes for 380 yards, two touchdowns, one interception and a passer rating of 79.5. In a word, Mayfield has been average, which is understandably not good enough to win in today’s NFL.

“Not good enough,” Mayfield said Wednesday. “I only care about winning, no matter what my stats are. Haven’t taken care of the ball well enough. That’s pretty much the only stat I care about.

“I’ve got to command this group better. I have to lead better, I have to make sure everybody’s on the same page to where we are executing at a much higher level. That’s the biggest disappointment for me is that hasn’t shown yet. So I take full ownership for that as an offense.”

Mayfield has encountered struggles that are familiar to those who watched him play in Cleveland. The 6-foot-1 quarterback has had nearly a dozen passes batted down at the line of scrimmage in his first two games, threw an ugly interception against the Browns in Week 1, and has struggled to connect with open targets. He’s fumbled five times (fortunately, the Panthers have recovered all of them) and also taken some unnecessary risks, though they haven’t produced as many turnovers as they did in his final season in Cleveland.

Most importantly, Carolina’s offense has struggled to establish a consistent rhythm. There have been bright spots — Mayfield nearly led the Panthers to a comeback win over Cleveland with an offensive explosion that included a 17-point fourth quarter and a 75-yard touchdown pass to Robbie Anderson — but it hasn’t been prevalent enough to inspire confidence in the group.

Instead, the Panthers have failed to get Christian McCaffrey going, and Mayfield has been forced to shoulder much of the offensive load. To this point, he hasn’t proven capable of using such responsibility to the Panthers’ advantage.

The issues that led Cleveland to seek a new quarterback have carried over to Carolina, where Mayfield has extended his streak of sub-100 passer rating games to eight. It’s the longest such streak in his career and tied for the second-longest active streak in the NFL.

Simply put, Mayfield needs to be better. He’s facing an opponent this week in New Orleans — a team that hasn’t allowed an opposing starting quarterback to post a 100-plus passer rating in any of their last eight games — that won’t make the going easy on him.

On the bright side, Mayfield sees a reason for optimism.

“We’ve shown our potential in little stints,” Mayfield said. “We’ve shown flashes. We have to be more consistent. You can see the explosive plays that can happen when we just do our job and we string a couple good plays together.”

Now it’s about establishing such consistency. The fate of Carolina’s season — and head coach Matt Rhule’s job — could depend upon it.

Why did the Cowboys release Dez Bryant? Contract, injuries led to abrupt end to Dallas career 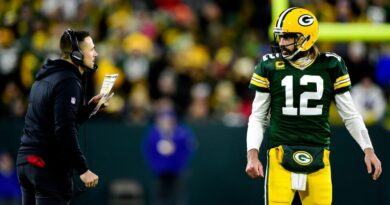