Home » NFL » Baker Mayfield still in limbo with Cleveland Browns: How did he get here, and what’s next? 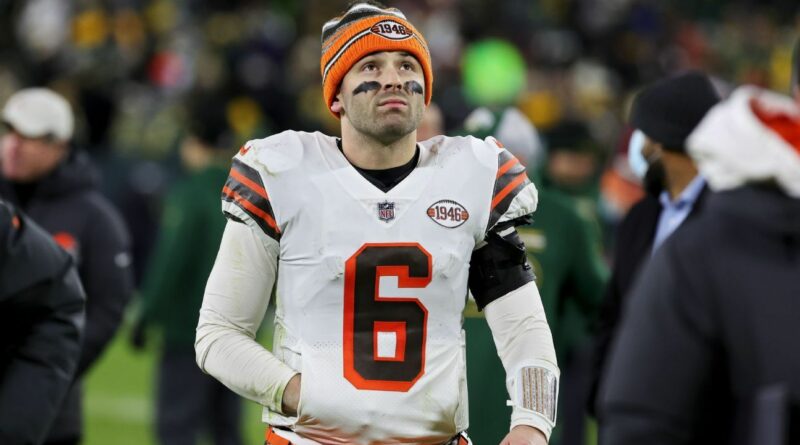 BEREA, Ohio — The NFL draft came and went, and quarterback Baker Mayfield is still a member of the Cleveland Browns.

The Browns couldn’t swing a trade with the Carolina Panthers, and according to multiple sources, never got close. As talks intensified during Friday’s second round, sources said Carolina wanted Cleveland to pay a significant portion of Mayfield’s guaranteed $19 million salary next season. The Browns balked, and Carolina traded up into the third round to draft Ole Miss quarterback Matt Corral, killing those trade talks, according to sources. As it stands, Corral — not Mayfield — will compete with Sam Darnold for Carolina’s starting job, and Mayfield remains in limbo with the franchise that took him No. 1 overall four years ago.

In 2018, Mayfield arrived in Cleveland, a city that has been searching for a franchise quarterback since the Bernie Kosar era of the 1980s, with enormous fanfare. But after quarterbacking the Browns to their first playoff victory in 26 years in 2020, his standing with the front office and locker room declined. Struggles on the field, a messy split with receiver Odell Beckham Jr. that divided the team, quarterback Deshaun Watson’s willingness to waive his no-trade clause to join Cleveland, and a perceived slight from the Browns’ front office all contributed to effectively end Mayfield’s time in Cleveland, pushing both sides to seek a fresh start.

In March, the Browns traded for Watson, even though he faced, and continues to face, 22 civil lawsuits from women alleging sexual assault and inappropriate conduct during massage sessions. Two grand juries in Texas declined to indict Watson on criminal charges, but the NFL is also conducting its own investigation, which could result in a suspension. Watson said he has “never assaulted, disrespected or harassed any woman,” and he plans to fight the lawsuits.

Mayfield, however, is still waiting for his new beginning. With no other trade partner on the horizon and Cleveland thus far unwilling to negotiate Mayfield’s release, according to sources, the Browns quarterback continues to have a murky future. A future that, just a year ago, seemed destined to be in Cleveland — before rapidly falling apart.

In last season’s opener against the Kansas City Chiefs, Mayfield looked like the passer who had finished the 2020 season ranked No. 10 in QBR. The Browns scored touchdowns on their first three possessions before finally coming up short on Mayfield’s game-ending interception.

But in Week 2 against the Texans, Mayfield suffered a torn labrum in his left — non-throwing — shoulder.

After that, he was never the same.

Mayfield completed 82% of his passes in his first two games last season, the best rate in the NFL. The rest of the way, while wearing a harness to keep his left shoulder in place, Mayfield’s completion rate fell to 57.7%, second worst in the league.

His QBR tumbled to 27th, the largest QBR drop-off (-30.4) of any passer from the 2020 season, according to ESPN Stats & Information research.

Through his marketing agent, Mayfield declined to speak to ESPN about the 2021 season or his exit from Cleveland. But during the “YNK” podcast published April 13, he said the shoulder injury affected him mentally, as well as physically.

“When it started hindering my play and going downhill, that’s when I was like, ‘Oh s—,” Mayfield said on the podcast. “That’s when I started losing my own self-confidence and just losing myself. This past year was rough.”

Following a 15-10 loss to the Pittsburgh Steelers on Oct. 31, Mayfield’s season would get even rougher. And behind the scenes, his future in Cleveland would gradually become tenuous as the Browns quietly began exploring a potential replacement.

Hours before the Nov. 2 trade deadline, Beckham’s father posted a video on Instagram highlighting all the times last season Mayfield didn’t throw Beckham’s way, or missed him when he was open. Odell Beckham Sr. trashed Mayfield in the comments as well.

OBJ didn’t disavow his father’s comments publicly, and he didn’t call or text Mayfield privately, according to multiple sources, even though they had often played video games together and had vacationed in Big Sky, Montana, with teammates on Labor Day weekend.

The Browns released Beckham on Nov. 5, clearing the way for him to sign with the Los Angeles Rams, with whom he’d go on to win a Super Bowl.

Beckham, a former star with the New York Giants before joining Cleveland in a blockbuster trade in 2019, had become one of the most popular players in the Browns’ locker room.

During his first training camp with Cleveland, Beckham took undrafted rookie receiver Damon Sheehy-Guiseppi under his wing. Before Cleveland’s 2019 preseason opener, Sheehy-Guiseppi misplaced his cleats, so Beckham gave him his, which Sheehy-Guiseppi wore while returning a punt 86 yards for a touchdown. When Sheehy-Guiseppi was later cut before the season, he posted a heartfelt message about Beckham on social media.

That same training camp, Beckham carried over a custom from New York, sitting with different groups of players at each meal in the cafeteria.

“You’ve got to get to know who you are battling with,” Beckham said then of the tradition. “When the whistle blows, it’s just us out there. These are guys … you’ll forever remember and cherish.”

The COVID-19 pandemic restricted how much teammates could interact in the practice facility over the next two seasons. But Beckham would continue to invite teammates over to his house to take whatever clothes or shoes they wanted from his sizable closet.

After Beckham’s father ripped Mayfield publicly and speculation grew about Beckham being on his way out, multiple players lobbied for Cleveland to keep OBJ on the team.

“I feel like the majority of this locker room would love to have him in this building,” safety John Johnson III said then. “Flat out.”

As one source put it, the way Beckham exited Cleveland “poisoned the well” for Mayfield with some teammates.

Shortly after Browns coach Kevin Stefanski announced Beckham wouldn’t be coming back, another starter was asked if he’d seen the video Beckham Sr. had posted of Mayfield not throwing the ball to his son. “Why would I watch the video?” the player asked rhetorically, according to a source familiar with the remark. “I see it every day in practice.”

At the time of Beckham’s release, Cleveland was already looking into Watson, who was on the Texans’ active roster but didn’t play in 2021. General manager Andrew Berry said as much during Watson’s introductory news conference on March 25.

“It was through this really five-month odyssey, and information that we were able to amass and the reference work, and obviously working through due process and the legal process, that got us comfortable pursuing the trade for Deshaun,” Berry said then of the team’s investigation into Watson.

As the Browns began considering Watson as an option, Mayfield continued to struggle.

Despite the turnovers, the Browns still had a chance for a winning drive late in the fourth quarter. But Mayfield was picked off again, sealing the loss. Cleveland would be mathematically eliminated from the postseason before playing another game.

“I hurt this team,” Mayfield said then. “It was just missed throws. There’s no excuse.”

As Mayfield was losing confidence in himself, he had also begun losing faith in Stefanski, according to multiple sources, even though the two had thrived the year before during Cleveland’s unexpected playoff run.

That feeling escalated the next week, on Jan. 3 during a Monday Night Football game in Pittsburgh. In what proved likely to be his final start for the Browns, Mayfield was sacked nine times. Afterward, he called out Stefanski’s game plan.

“When you’ve got [NFL defensive player of the year] T.J. Watt over there, and we’re not giving our rookie tackle [James Hudson] a whole lot of help, it’s not going to be good for us,” said Mayfield, who at one point had thrown 10 consecutive incompletions in the 26-14 loss.

As Mayfield labored through a listless performance, the Browns kept him in to the final offensive play, which was an interception.

According to multiple sources, those close to Mayfield — who to that point had missed one game because of his shoulder injury — wondered at the time if the Browns were trying to make Mayfield look as hapless as possible in prime time, to potentially pave the way for the franchise to more easily explain why it might be moving on from him in the offseason.

The Browns, through a spokesman, declined to comment on those suspicions.

After the Pittsburgh loss, Mayfield told reporters he would be conferring with his family and agent — not the team — about whether he would play in the season finale against Cincinnati.

“I’m an extremely competitive guy,” he said then. “Now it’s time for me to start looking at what’s in the best interest of me and my health.”

Mayfield had grown frustrated with his situation in Cleveland over the years, according to multiple sources. He was the fourth quarterback in league history to play for four different head coaches in his first three seasons. The Browns picked up the fifth-year option on Mayfield’s contract on April 23, 2021, but even after the playoff win, the team refrained from engaging Mayfield’s camp on extension talks last offseason, according to multiple sources. It was a signal to Mayfield that the team was unsure he was their long-term answer at quarterback. Since last offseason, Berry has repeatedly declined to comment on Mayfield’s contract status.

Still, the Browns entered this offseason prepared to move forward with Mayfield.

“We fully expect Baker to be our starter,” Berry said in January, “and bounce back.”

Despite the turmoil of 2021, Mayfield had recommitted to the Browns as well.

Sources described his exit interview with Stefanski as productive, and Mayfield’s rehabilitation from a Jan. 19 surgery to repair the labrum was ahead of schedule. After Cleveland traded for wide receiver Amari Cooper on March 12, Mayfield reached out to him to begin planning a throwing session together.

At the combine in February, Berry informed Mayfield’s agent the Browns could pursue an All-Pro-caliber quarterback, like Russell Wilson or Aaron Rodgers, according to a source familiar with the conversation. Mayfield’s camp was also aware Cleveland’s short list could include Watson. And when a Harris County grand jury in Texas declined to pursue criminal charges against Watson on March 11, the Browns went all-in to get him.

What upset Mayfield even more, according to multiple sources, was finding out over social media on March 15 that Stefanski, Berry and Browns owners Jimmy and Dee Haslam were flying to Houston to meet with Watson. Before the Browns officials had landed back in Cleveland, Mayfield posted a letter on social media thanking the city of Cleveland and its fans “who truly embraced who I am.”

He would later say on the “YNK” podcast that he felt “disrespected” by the Browns.

“I was told one thing,” he said, “and they completely did another.”

But the final straw for Mayfield, according to multiple sources, came on March 16, when ESPN NFL insider Chris Mortensen said he believed Mayfield’s time in Cleveland was over and that he was told the Browns wanted “an adult” at quarterback.

The next day, Mayfield requested a trade. The day after that, on March 18, the Browns landed Watson, signing him to a five-year deal worth a record $230 million, fully guaranteed.

“Contrary to what is out there in the press, we think highly of Baker and did not get down on him,” Jimmy Haslam said on a video call with the media following Watson’s introductory news conference. “[I know] Baker felt that [“adult” comment] came from ownership, but that’s not true. Baker gave it everything he had while he was here.

It has been a chaotic journey. But it has yet to reach its end.